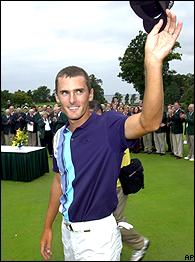 Winning for the first time in his career was just gravy.

The victory was worth $666,000 and vaulted Howell from 37th
place to 18th on the PGA Tour's money list for the season. He has
nearly clinched a spot in this month's $5 million event for the
year's top 30 money winners.

''It's hard to put into words. It really hasn't sunk in yet,''
said Howell, who scored a two-shot victory over Brandt Jobe and
1996 winner Scott Hoch.

The victory came in his 68th career start, and he was starting
to get annoyed about questions if he felt overdue.

''After a while, you start listening to it,'' the 23-year-old
Howell said. ''I know that ideally I'm not supposed to, but it
starts to get in your head a little bit.''

Howell ended such talk with a clutch up-and-down birdie on No.
15. He had an eagle, four birdies and three bogeys on his card
through 14 holes. He said challenging for the lead and giving shots
back actually helped his game.

Howell became the 14th first-time winner on the PGA Tour this
year, tying the record set in 1991, and the sixth player to break
through at this event. He's also the last since it was the 22nd and
final PGA Tour event on the River Course, which will play host to
the LPGA Tour next year.

Jobe, who matched Howell's birdie at No. 15 but bogeyed the next
hole, drove into the rough on the par-4 finishing hole. He hit his
second shot into the greenside rough, missed a chip to tie it and
two-putted for 72.

The ending wasn't nearly as dramatic as the 15th hole, a
506-yard par 5 that often proves pivotal. Tied with Jobe at 13
under, Howell pulled his second shot over the green, chipped and
dropped a 24-foot birdie putt.

The former NCAA champion then parred out. He missed a 10-foot
putt for par on the 18th hole after a 311-yard drive and a
radar-like approach.

''That's probably the best drive I have ever hit in my life,
considering the circumstances,'' he said of No. 18, adding he
thought he needed to make birdie. ''I couldn't feel my arms on that
second shot.''

It proved not to matter. Jobe hit consecutive approaches short
on No. 16, parred the 17th, and hit into the rough twice on the
finishing hole. It was one last demonstration of how costly the
rough could be.

The 16th hole was the killer, Jobe said.

''I'm at 14 under standing in the middle of the fairway and I've
got a ball going straight at the hole, perfect,'' he said. ''If it
flies two more yards, I'm probably at 15 under and leading the golf
tournament. For me, that was the difference.''

Throughout Sunday, the leaders were Jobe, intent on certifying
his nine victories overseas as legitimate; Mayfair, seeking to end
a four-year winless drought; and Howell, looking for that his first
victory.

Mayfair joined the also-rans on the 383-yard 14th hole when he
drove into the rough, failed to get out on his next two shots,
chunked a chip onto the greenside fringe, chipped well past the
hole, and two-putted.

Corey Pavin, seeking his first victory since 1996 and the 15th
of his career, twice got within two shots of the lead, then bogeyed
each time.

Scott Hoch was three off the lead at the start and playing in
the second-to-last group. He birdied three of the first six holes,
bogeyed the other three and all but took himself out by following
with seven straight pars.

Steve Flesch, seeking his first victory, was 4 under and within
two of the lead after 11 holes, then double bogeyed the par-4 12th.