It would be easy to portray Hootie Johnson as a stubborn
Southerner, a rube who believes women should stay in the kitchen
and not concern themselves with becoming members of Augusta
National Golf Club. 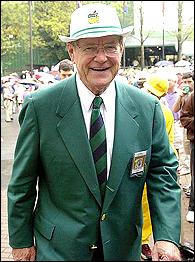 Then he goes and invites the University of South Carolina
women's golf team to play 18 holes with him at the hallowed home of
the Masters.

"It was incredible,'' said Kristi Coggins, the team's coach.
"From the minute we drove through the gate, we were treated like
queens. Hootie Johnson was so gracious.''

Obviously, there is more to William Woodward Johnson than just
his very public defense of Augusta's male-only membership.

His supporters describe him as a man of inclusion, going back to
the turbulent days of the civil rights movement in South Carolina.

Johnson helped blacks get elected to the state legislature for
the first time since the turn of the century. He ran a committee
that desegregated the state's public colleges. His was one of the
first major banks in the South to appoint a black to the board of
directors.

"He had the reputation of being progressive,'' said I.S. Leevy
Johnson, one of three blacks elected to the Legislature in 1970
with Hootie Johnson's backing.

His campaign to foster racial harmony spilled over to feminine
causes. The father of four daughters, he appointed women to
management positions at Bankers Trust, a company started by his
father but guided to national prominence by the son.

Four years ago, Johnson brokered a deal in which South Carolina
became the first major college to name its business school after a
woman, New York investment banker Darla Moore.

Maybe that's why so many people were stunned at Johnson's
defiant reaction to a letter from Martha Burk, chairwoman of the
National Council of Women's Organizations.

Burk asked Augusta National to admit female members for the
first time in its 69-year history. Johnson not only declined to
discuss the club's membership policies, he released a scathing
statement saying Augusta would not be forced to have a female
member "at the point of a bayonet.''

"We were trying the olive-branch approach, but he's unwilling
to talk,'' Burk said.

Malissa Burnette, an attorney who has handled several
high-profile court cases advancing the cause of women in South
Carolina, said Johnson's response to Burk seemed out of character.

"It has people scratching their heads. Who is the real Hootie
Johnson? Will he please step forward?''

To others, Johnson's response was not out of character. He has
always favored working behind the scenes, without fanfare, to
address social problems. He doesn't like being pushed into a very
public corner, especially when it comes to matters involving
Augusta National.

"You can't intimidate him,'' Leevy Johnson said. "He's been a
fighter all his life.''

The 71-year-old Hootie Johnson is an Augusta native who attended
his first Masters when he was 4. He views himself as the keeper of
the green jacket, preserving the club's independence and the spirit
of Bobby Jones.

One week a year, Augusta National hosts one of golf's four major
tournaments. The other 51 weeks, it retreats behind the tall gates
that seclude Magnolia Lane from the outside world.

The private club has no formal link with any players or
organizations, allowing it to set its own rules, move at its own
pace. Augusta didn't admit a black member until 1990, purportedly
thanks to an inside effort led by Johnson before the club could
become a target of protests.

Of course, he became a member in 1968 and the club's vice
president in 1975, so it wasn't as if Johnson moved with haste to
break down the policy of racial exclusion.

When it comes to women, Augusta National is more open than some
other male-only clubs. Women played more than 1,000 rounds last
year, with no restrictions on their tee times or access to the
clubhouse.

"That, in itself, says a lot about his attitude,'' Coggins
said.

According to his supporters, Johnson probably already was
working with his usual deliberate, low-key style to admit a female
member when Burk tried to hurry along the process. That resulted in
a stalemate.

Johnson's feistiness was evident during his football career at
South Carolina in the early 1950s. He wasn't afraid to mix it up
with bigger players, becoming one of the best blockers in the
Atlantic Coast Conference as a fullback.

"He was very smart, very tough,'' said Johnny Gramling, the
team's quarterback. "The only drawback he had was his eyesight. It
wasn't good. Back then, they didn't have contacts and stuff like
that. He couldn't catch a pass.''

After graduating from South Carolina, Johnson followed his
father into the banking business. By 1965, he became the youngest
bank president in the state, taking over the helm of Bankers Trust
at 34.

A pioneer of interstate banking, Johnson guided the family
company through a series of mergers. Eventually, it became part of
Bank of America.

McNair was governor during the 1968 "Orangeburg Massacre,'' a
pivotal civil rights moment in which three black college students
were killed by South Carolina troopers. He said Johnson was a key
figure in curbing racial intolerance, gradually convincing the
business community that integration was vital to the state's
growth.

"It's important for people to know who the real Hootie is,''
McNair said. "He doesn't discriminate against anybody.''

South Carolina football coach Lou Holtz is now a member at
Augusta National, undoubtedly because of his friendship with
Johnson. They play golf together and get their hair cut by the same
barber.

Johnson has done a lot at Augusta National since taking over in
1998. Already, he's overseen more changes in the club's signature
event than the previous three chairmen combined.

The qualifying criteria for the Masters was changed. A second
cut of rough was introduced. Television coverage was expanded. And
the course itself underwent its biggest renovation since the club
opened in 1933.

When it comes to female members, Johnson isn't ready to budge -- yet.

"I think it's inevitable,'' Leevy Johnson said. "If anything,
I think this controversy has delayed it. In my opinion, Hootie was
already trying to do it on the inside.''