KAPALUA, Hawaii -- Ernie Els could not have asked for a
better start. He set a PGA Tour scoring record, won the
season-opening Mercedes Championships by eight shots, and Tiger
Woods is nowhere to be found. 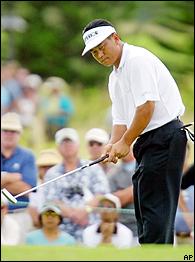 Not that it would have mattered Sunday.

In a record-setting start to the season, the Big Easy crushed
his competition at Kapalua with five birdies on the final seven
holes for an 6-under 67, shattering the tour record in relation to
par at 31-under.

Better yet, he stated his case as a legitimate challenger to
Woods.

Woods missed the season-opening event as he recovers from knee
surgery, but it's hard to imagine anyone stopping Els on a calm and
defenseless Plantation Course.

The 33-year-old South African went wire-to-wire at Kapalua,
overcoming a sluggish start to pull away from K.J. Choi and win by
the widest margin on tour in two years.

''I'm not trying to send a message to anybody,'' Els said. ''I'm
just trying to prove to myself that I can play well. Let's see
where it takes me.''

It took him into the record books this week.

The previous 72-hole record in relation to par was 28 under, set
by John Huston at the 1998 Hawaiian Open and by Mark Calcavecchia
two years ago in the Phoenix Open. Els finished at 261, breaking by
five shots the tournament record set four years ago by David Duval.

''You want to say when you win majors, that you played your best
then,'' Els said. ''But this is right up there. It's an
unbelievable week for me.''

''It makes me feel very, very comfortable at the moment,'' Els
said. ''I can go out there and really think about trying to play
well. I really look forward to the year now. This is really a
perfect start, something I needed.''

His victim this time was Rocco Mediate, who closed with a 63.
Mediate also was the runner-up to Calcavecchia when he set the PGA
Tour mark of 256 in the 2001 Phoenix Open. Choi, who had a tough
time on the greens, had a 73 and also finished second at 23-under
269.

''I don't see a problem with Ernie challenging Tiger for the
next however many years,'' Mediate said. ''I certainly think Tiger
would love for that to happen. He likes to be pushed.''

Woods, who won't return until at least the Buick Invitational at
Torrey Pines, already has some catching up to do.

Els won $1 million for his 11th career victory on the PGA Tour,
and sits atop the money list for the first time in his career. He
plans to play next week in the $5 million Sony Open.

He will be the big favorite until Woods returns.

Els now has won eight times worldwide over the last 13 months,
including a victory in the British Open for his third major.

The Big Easy had to work hard for this one.

Starting the final round with a two-stroke lead over Choi, Els
predicted a shootout. Not many doubted that when typically strong
winds stayed away from Kapalua for the fourth straight day, which
contributed to the record scores.

For the first time, everyone in the 36-man, winners-only field
finished under par.

Choi had a chance to apply pressure on the Big Easy, but instead
practically handed him the tournament with poor putting. The stocky
Korean missed from 6 feet for birdie on No. 4, from 8 feet for
eagle on No. 5 and from 3 feet for par on the next hole.

Els tried to give it back by failing to birdie the par 5s and
missing the green badly to the left on No. 7 for a bogey.

Els made the turn at 1 under, while Choi was even par, the worst
two front-nine scores on the final round. Despite the conservative
and sometimes sloppy play, Els had a three-stroke lead and remained
in control.

Choi cut the lead to one with birdies on the 10th and 11th, the
closest anyone got to Els.

Els finally responded. He nearly drove the green on 373-yard
12th hole and chipped close for birdie, then finally secured
victory on the next two holes.

''I was playing a little tentative,'' Els said. ''That tee shot
was the key to the round.''

Els hit into a bunker on No. 13 and then left himself a 100-foot
putt, which he got down in two. From the middle of the fairway,
Choi left himself 80 feet from the pin and three-putted for bogey.

Els widened his margin to five on No. 14 by playing safe off the
tee and pitching to 6 feet for birdie. Choi tried to drive the
green on the 305-yard hole, short-sided himself and wound up
three-putting for bogey.

From there, it was only a matter of how badly Els would break
the record.

It was his third time in contention at Kapalua in the last four
years. One of those was in 2000, when he lost in a sensational duel
with Woods that proved to be the launching pad to a record-setting
year by Woods.

A year later, Els squandered a four-stroke lead midway through
the third round.