ORLANDO, Fla. -- Tiger Woods split the middle of the fairway
with a 3-wood, then ducked outside the ropes and dropped to his
knees, his stomach heaving from a nasty bout of food poisoning. 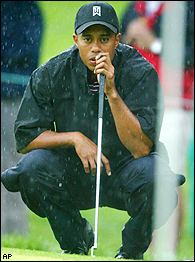 He never had it so difficult, nor has he ever made winning look
so easy.

Sickened by some bad pasta that caused him to vomit through the
night and a rainy Sunday, Woods still managed to win the Bay Hill
Invitational for the fourth straight year by going the final 44
holes without a bogey and winning by 11 strokes.

It will only look routine in the record books.

''If I wasn't in contention, I wouldn't have gone. There's no
way,'' Woods said. ''It was a joke. Every single tee shot hurt
because my abs were obviously sore from last night, and I continued
on while I was playing.

''The night was long, and the day was probably even longer,'' he
said. ''That being said, I'm very happy with the way I played.''

Woods closed with a 4-under 68 to become the first player in 73
years to win the same tournament four straight times.

It also was the fourth time in his career he has won by double
digits, another dominant performance despite the piteous scenes of
him running to the bushes and behind courtesy vans as he tried to
find a private place to be sick in front of 10,000 fans.

Woods came down with food poisoning Saturday night after a pasta
dinner prepared by his girlfriend, Elin Nordegren. Only a day
earlier, she collapsed outside the clubhouse from food poisoning
and dehydration.

Nordegren spent the night in the hospital. Woods didn't think he
had that option.

''The problem is, it's so easy to check into a hospital, but
getting out is the hard part,'' Woods said. ''I wanted to get my
fluid levels up in case today was hot and humid, but ... I didn't
know if they were going to let me go. So, I decided not to
do that.''

Woods was helped by a cool, steady rain that drenched Bay Hill,
not to mention a five-stroke lead going into the final round and a
game that looks better than ever.

Woods finished at 19-under 269 and became the first player since
Gene Sarazen in the Miami Open (1926-30) to win the same event four
straight times.

Faxon knew he didn't have a chance, not after Woods laced a
3-wood from 265 yards into 12 feet on No. 4 for an eagle to
increase his lead to eight strokes.

''When he's got a seven- or eight-shot lead, he's not going to
throw up all over himself,'' Faxon said, only seconds later
realizing his dubious choice of words.

''He was ready to play,'' Faxon said. ''As sick as he felt, I
don't think if he felt great he would have played much better than
that.''

Especially not on this course, where Woods first won in 1991 in
the U.S. Junior Amateur.

Arnold Palmer might own the Bay Hill Club & Lodge, but Woods
owns the tournament.

His 11-stroke victory was the largest margin in the 25-year
history of Bay Hill, breaking by two the previous mark, set by Fred
Couples in 1992.

It matched the third-largest margin in Woods' career, behind his
15-stroke victory in the 2000 U.S. Open and his 12-stroke win in
the 1997 Masters. Woods also won at Firestone by 11 shots in 2000,
when he could barely see the 18th green because of darkness.

Steady rain that fell throughout the day almost kept Woods from
finishing this one. Large pools of water covered the fairways, but
there was no point in stopping -- everyone knew how this was going
to turn out.

Woods improved to 28-2 when he has at least a share of the
54-hole lead, and he has won the last 16 times when leading through
36 holes.

''It was mind-boggling watching the way he played,'' Cink said.

It was clear something was wrong with Woods about 20 minutes
before his tee time when he sat on his bag after taking a few
practice putts. He also took a seat after his opening tee shot, a
weak fade that found the first cut of rough.

Woods usually walks quickly and with purpose down the fairways.
On Sunday, he was walking 40 yards behind his playing partners.

Woods had the advantage of a five-stroke lead, and the sloppy
conditions made it difficult for anyone to make a run at him. His
job was to make pars, and that's what he did.

''I saw that Fax wasn't swinging all that well,'' Woods said.
''I knew if I could keep making a lot of pars, put a whole bunch of
pressure on these guys, then they would have to play some kind of
special round to catch me.''

Woods won for the 37th time in his career, 11th most in history.
He earned $810,000 and again leads the PGA Tour money list with
over $2.8 million in just four tournaments, after missing the first
five weeks while recovering from knee surgery.

This is only the second time in his career that Woods has won
three times before the Masters, and he still has The Players
Championship next week.

The other time was 2000, when Woods turned in one of the
greatest seasons in golf with nine victories and three straight
majors. This is shaping up to be another bonanza.

He won by four at Torrey Pines in his first competition in two
months. He won by eleven at Bay Hill despite spending half of his
time on his knees or resting on his golf bag.

At times, it looks like he can't be stopped.

Notes
Ernie Els, playing in the same 72-hole tournament with
Woods for the first time this year, had a double bogey on the 18th
and shot 77. He finished at even-par 288, 19 strokes behind. ... Ty
Tryon closed with a 69 and tied for 10th, the best finish of his
career.