RANCHO MIRAGE, Calif. -- At the age of 13, Annika Sorenstam
was a 45-handicapper in Sweden. Patricia Meunier-Lebouc was just
being introduced to the strange game of golf in France. 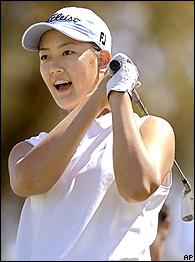 Neither could imagine spending their spring break the way
Michelle Wie is -- playing with them Sunday in the final round of
the Kraft Nabisco.

''I cannot relate at all,'' Sorenstam said. ''She's playing at a
totally different level than I did at that age.''

The long-hitting Wie gave fans a glimpse of the future of
women's golf Saturday, overpowering the Dinah Shore tournament
course to shoot a 6-under 66 and join Sorenstam and Meunier-Lebouc
in the final group of the first major championship of the year.

The eighth-grader wasn't all that happy with the result after
two short missed putts on the back nine.

Meunier-Lebouc shot a 2-under 70 to take a three-stroke lead
over Sorenstam and four over Wie.

But while a French player leading a major championship would be
big news any other time, it was overshadowed by the play of Wie,
who had the crowds gasping in disbelief at the length of her
drives.

A 13-year-old named Aree Song was in the final group here three
years ago and finished 10th, but she didn't hit the ball the
distances Wie does.

A day earlier, Wie became the youngest player to ever make a cut
in an LPGA major championship. She didn't take long to challenge
for the lead, making six birdies in the first 11 holes and pars the
rest of the way in.

Her gallery grew along the way, as word spread of the
13-year-old who hits the ball past everyone.

Sorenstam, meanwhile, had putting problems and finished with a
71 in her bid to win the Kraft Nabisco a third consecutive time.

Sorenstam is a master at playing her own game and keeping her
focus. She will need all of it to play with a 13-year-old who will
likely be hitting her drives 30 to 40 yards past her.

Meunier-Lebouc, who began the day with a two-shot lead, led by
as many as five shots on the back nine before bogeys on 16 and 17
brought her back closer to the field.

She missed an 8-footer for birdie on 18 to finish with a 2-under
70 that left her at 8-under on a course she hadn't seen before this
week.

Meunier-Lebouc, who has won five times on the European tour and
once last year on the LPGA Tour, has experience playing with
Sorenstam in the final group. She was with her last week in
Phoenix, where they tied for third.

She's seen Sorenstam up close enough while playing her last five
rounds with her to know what she's capable of. She also knows she
is playing the golf of her life.

''I think it's going to be the best experience of my life,''
Meunier-Lebouc said. ''It keeps getting better every day.''

Rookie Lorena Ochoa had threatened to make it in the final
group, getting to 7-under after a front-nine 32. But she had
problems on the back nine, hitting it behind a tree on 11, and into
the water on 14 for a back-nine 42 that left her seven shots back.

Wie's prodigious length and her calm demeanor not only won over
the galleries, but seemed intimidating to some of her fellow
players.

That showed on the 12th hole, a 385-yard par-4 where Wie hit a
3-wood long down the fairway. Leta Lindley, who was playing with
Wie, pulled out her driver, hit it short into the right rough and
ended up making a triple-bogey 7.

''It was very unnerving for the two girls playing with her after
a while,'' said Wie's swing coach, Gary Gilchrest.

The 6-foot-tall Wie stood waiting patiently all day Friday for
her playing partners to hit their shots from 50 to 100 yards behind
her. Almost every second shot on the par-4s was hit with a wedge,
and she had irons into many of the par-5s.

Wie's biggest problems came with her father, B.J. Wie, a
university professor who caddies for his daughter. On the 18th hole
she hit a long drive and had about 225 to a green surrounded by
water and he wondered if she was going to go for it.

''I told him, 'Don't even put that thought in your mind,'' Wie
said, laughing.

Wie said she also had to calm her father down throughout the
round.

Notes
Wie's 66 tied the low round by an amateur in an LPGA major
set by Carol Semple-Thompson in the 1994 U.S. Women's Open and
Caroline Keggi in the 1988 Nabisco Dinah Shore. ... Wie said she
will have to cut back her schedule next year because she will be in
high school taking honors courses in geometry, biology and Chinese.