LAS VEGAS -- Annika Sorenstam would have liked one more
round. The way she played on the back nine, a few more holes might
have been enough. 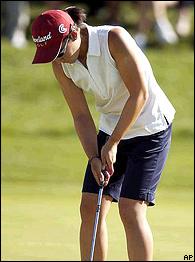 For Candie Kung, though, the Takefuji Classic ended at just the
right time.

Kung bogeyed the final hole Saturday, but still won her first
LPGA tournament by two shots over a charging Sorenstam and two
others with a closing round of 2-under 70.

Sorenstam shot her second straight 67, a score that left her
wishing the tournament was 72 holes instead of 54.

"I've always been in favor of four-day (tournaments),''
Sorenstam said. "But I knew it was 54 holes going into the
tournament.''

Kung had a three-shot lead going into the final hole, where in
the first two days of the tournament she had made double bogey and
bogey. This time, she three-putted but it didn't matter.

Kung, who finished at 12-under, thought she might have the lead
on the final hole but she wasn't sure. She avoided looking at
leaderboards until she was on the 18th green.

Still, she was nervous, drinking a bottle of water a hole on the
last few holes while trying to keep her mind off of what she was
doing. As she walked up the 18th hole, Kung and her caddie talked
about how many rooms the adjoining Las Vegas Hilton hotel might
have.

"I didn't know how many shots I was leading by,'' she said. "I
thought it might be one or two. I didn't look at the leaderboard at
all.''

Kung double bogeyed the hole in the first round and bogeyed her
final hole after shanking a shot in the second round. But Saturday,
the 4-footer she missed for par meant only that her winning margin
was smaller.

Sorenstam rallied on the back nine with three straight birdies
and closed with a birdie on the 18th hole. But, after being six
shots out in the opening round, she never threatened to take the
lead in the 54-hole event.

"I've been playing catch-up the last two rounds,'' Sorenstam
said. "I'm very pleased with the way I played the last two days. I
had a chance at the end.''

It wasn't much of a chance, though, because Kung made three
birdies in four holes beginning at the par-5 ninth to take a lead
she never relinquished.

Sorenstam shot 67 in both her final two rounds, but ran out of
holes to catch Kung. Christie Kerr and Soo-Yun Kang finished tied
with her for second at 10-under-par.

Eight of the 35 tournaments on the LPGA Tour this year are 54
holes instead of 72.

Kung, who took up golf when her family moved from Taiwan to the
United States in 1995, showed signs in the first two rounds that
she might have trouble holding the lead.

But she played the finishing 495-yard par-5 steady, laying up on
her second shot and then hitting her third over the water onto the
green.

Kung missed her par putt from about 4 feet, then tapped in for
the win.

"It was just Candie's day,'' Kerr said. "She's a solid young
player. She has a bright future.''

Kerr had a chance to tie for the lead on the 11th hole, but her
short birdie putt missed and she played 1-over the rest of the way
in for a closing 71.

Kerr said every time she thought she had an opportunity to get
close, she missed the putt.

"If one of those putts goes in, it kind of changes the momentum
of the entire tournament,'' she said.

Catriona Matthew, tied with Kung going into the final round,
missed a 2-footer for birdie on the 11th hole that would have tied
her for the lead, then missed a 3-foot par putt on the next hole to
fall out of contention.

Notes
Kim Saiki was 8-under and contending when she made a
double bogey on the 11th hole after having only a lob wedge to the
green. ... First prize was $165,000. ... The Takefuji Classic moved
to Las Vegas this year after being held in Hawaii. ... The
tournament was only 54 holes, so the final round could be televised
Sunday in Japan.