Sorenstam's hole-by-hole scores | Maisel: Too much to ask
FORT WORTH, Texas -- When her final putt fell for a par,
Annika Sorenstam walked off the 18th green at the Colonial to a
standing ovation unlike anything the winner will hear Sunday. 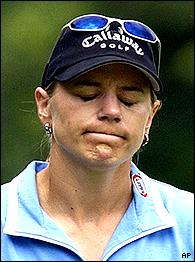 Never mind that she shot a 4-over 74 Friday and missed the cut
by four shots.

This was a chance to test herself at the highest level, on a
tough course, under the kind of pressure few others in the history
of golf have ever faced.

The first woman in 58 years to compete on the PGA Tour showed
she could hold her own against the men -- but only for two days.

''I don't regret anything about coming here,'' Sorenstam said.
''If a lady is good enough to get an invite or she qualifies, she
should have every right to come here.''

Though smiling to the end, Sorenstam wiped away tears as she
walked off the green to a deafening and well-deserved ovation. She
cried again when she signed for her 74, realizing that three months
of steeling herself for the occasion, and two days on a stage
she'll never visit again, were finally over.

Sorenstam wound up 13 strokes behind co-leaders Kenny Perry (64)
and Dan Forsman (66), who will take a one-stroke lead into the
weekend.

It probably won't be the same.

Sorenstam brought a buzz to Colonial not felt since Ben Hogan
was prowling a course that became known as ''Hogan's Alley.''

''It's been fantastic,'' Sorenstam said. ''They have cheered me
on from the first tee to the 18th hole. I didn't want to let them
down.''

Babe Zaharias was the last woman to compete on the tour, in
1945. She made the 36-hole cut in the Los Angeles Open, but failed
to qualify for the final round. She also played in Tucson and
Phoenix, making the cut both times.

Suzy Whaley will play in the Greater Hartford Open in late July,
having qualified through a tournament for club pros.

Sorenstam believes another woman will take on the PGA Tour -- but
it won't be her.

The competition was the best in the world. The course was longer
-- 7,080 yards -- and tougher than any she has played. The atmosphere
was something only Tiger Woods could appreciate.

Sorenstam handled it all better than most expected, and eight
shots better than the odds out of Las Vegas.

''Length wasn't a problem,'' she said. ''It was everything
around it. I'm emotionally drained, because I gave it all I had.''

Leading the cheers were some of the men.

''The way she handled herself with style and grace ... it's kind
of a sad ending, I suppose,'' Forsman said. ''I want to see the
rest of the story.''

For a fleeting moment, this looked as if it might have a
storybook ending.

An afternoon start brought slightly tougher conditions on the
course, and wild enthusiasm among the thousands outside the ropes.
Fans were stacked so deep behind the green that some cheered
without ever seeing the shot.

Support came from all quarters.

''I hope she makes the cut,'' President Bush said from his ranch
in Crawford, about two hours away.

She saved par from the bunker twice on the first three holes. In
between, she fired at the flag and holed an 8-foot birdie putt on
No. 2 to get to even par for the tournament, just inside the cut
line.

Still, there were signs she was not on top of her game, that
three months of buildup and three days under intense scrutiny were
starting to take their toll.

It began to unravel on No. 5, the last of a three-hole stretch
known as the ''Horrible Horseshoe,'' when her tee shot sailed to
the right and into the trees.

Sorenstam was lucky the branches knocked the ball into the rough
instead of sending it into the hazard. She punched out to the
fairway, missed the green to the left and had to make a 15-foot
putt for bogey.

Another chunked chip on No. 6 led to another bogey. She took
three putts from 70 feet on the eighth hole, her first effort
barely making it up the ridge.

Just like that, she was at 3 over for the tournament and in need
of at least two birdies on the back nine just to qualify for the
weekend.

Sorenstam said she wasn't trying to prove anything to anyone,
least of all that she could beat the boys.

Even those at the top of the leaderboard were impressed.

''I played with Tiger two times last year ... and the media
scrutiny was really intense out there,'' Perry said. ''I performed
very poorly. My hat's off to her. I think she did a great job.''

Jesper Parnevik, who had a 68 and was among those at 6-under
134, said after a practice round with Sorenstam on Tuesday that for
her to break 75 both days would be a realistic goal.

Sorenstam was better than that, and well under the 153 predicted
by Vegas bookmakers.

''She played amazing,'' Parnevik said. ''I guess we have the
Shark, the Tiger and now we have the Superwoman.''

Now she goes back to her day job.

After two rounds on the most demanding stage, before the kind of
crowds she has never seen before and might not again, Sorenstam has
a title to defend next week outside Chicago in the Kellogg-Keebler
Classic.