MEMPHIS, Tenn. -- David Toms is so confident right now that
nothing can shake him up. 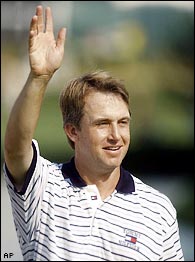 After hitting a tree with his first tee shot and bogeying the
first hole, Toms responded with birdies on the next four as he shot
a 7-under 64 Sunday to win the St. Jude Classic.

Toms finished three strokes ahead of Nick Price for his second
victory in eight weeks.

''I knew if I played my game, I was going to be there in the
end,'' Toms said. ''I felt good about my game even after I bogeyed
the first hole. That's what I'm doing a lot better now than I did
early in my career. I wouldn't say I'm the guy to beat, but I
definitely like my chances.''

Toms, who won the Wachovia Championship in May, picked up his
ninth PGA Tour victory in a town where his swing teacher lives and
he visits for duck hunting. The $810,000 winner's check moved him
to 10th on the all-time money list with more than $16 million in
his career.

''This place is pretty dear to me. It means a lot. It's more
than just a regular tournament. It really does mean a great deal,''
Toms said.

Toms couldn't have looked much more comfortable in a final round
that had five players tied atop the leaderboard early.

He started a stroke behind Sweden's Richard Johnson, a tour
rookie, but Johnson couldn't keep pace as everyone attacked the TPC
at Southwind course by going low in nearly perfect conditions.

Toms separated himself from the pack with an eagle, eight
birdies and three bogeys for a 264 total.

Price bogeyed No. 18 when he put his second shot into the water
short of the green shooting at the pin, hoping for birdie in case
of a playoff. But he was happy with his finish.

''I can't play much better than the way I played this weekend,''
Price said. ''If I don't shoot 73 on Thursday, I'd probably have a
realistic chance at winning.''

Toms stumbled with a bogey on the par-4 first when he hit a tree
with his tee shot and the ball bounced into the left rough. But he
had his putter going as he birdied his next four for a share of the
lead at 16 under.

He birdied the par-3 8th with a 15-footer to take the lead to
himself at 17 under. But Janzen and Price, a two-time winner here,
wouldn't go away.

Janzen birdied Nos. 10 and 11 to drop to 18 under along with
Toms atop the leaderboard, while Price, who teed off 80 minutes
earlier, birdied three of his final holes to go to 18 under. Toms
birdied No. 12, then bogeyed the par-4, 430-yard No. 13 when he
pushed a par putt just right after catching a glimpse at the
leaderboard.

The toughest hole on the course helped Toms take control.

Janzen, who has not won since the 1998 U.S. Open, three-putted
for bogey after putting his tee shot on the left edge of the wide
green and dropped to 17 under. Toms put his tee shot in almost the
same area and then rolled in a 50-footer across a ridge in the
green for birdie and a two-stroke lead at 19 under. It was only the
fifth birdie on that hole Sunday.

''It was one of those putts I'll remember for a long time
because obviously winning the golf tournament, that was a big part
of it. It's a putt I could've three-putted very easily. To make it,
that helped tremendously,'' Toms said.

Toms sealed the victory with his only eagle on the par-5,
528-yard 16th. He hit a 5-iron looking for the front of the green
but rolled it to 12 feet from the hole on his second shot. He made
the putt for eagle and a four-stroke cushion over Price, who then
left the course.