Michelle Wie always wanted to be like Tiger Woods. Now she's getting her wish in more ways than she ever imagined. 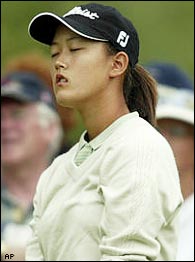 In a matter of days, the precocious teen has become one of the world's most famous golfers, just like Tiger did when he was a big-smiling teen with a vaporizing drive. But Wie is also getting a taste of the highs and lows of Tiger-esque fame -- feeling both the highest thrills of public adulation and, allegedly, the ugliest chills of private resentment.

Last week Michelle saw her 13-year-old smiling face in several national publications and on ESPN. This weekend at the U.S. Women's Open, according to father B.J., she saw the unsmiling face of an incensed father of one of her competitors, waiting for her outside the clubhouse at Pumpkin Ridge.

"I wasn't able to concentrate the whole day Saturday," Mr. Wie said Monday by phone. "I was so worried about my daughter. The old man saying those threatening words was beyond anything I could imagine. I was shaking."

Mr. Wie would not disclose exactly what was said, but he asked the USGA for extra security. USGA communications director Marty Parkes confirms that the number of security officials assigned to Michelle's group was raised from two -- the usual number assigned to "prominent" golfers -- to "three or four."

Reached by phone Monday, Mr. Ammaccapane was asked if he threatened Mr. Wie.

"I have nothing to say about Mr. Wie or his daughter," Mr. Ammaccapane said. "We've had a week from hell."

Michelle's week wasn't much better. The fact that she made history by becoming the youngest person ever to make the cut at the women's U.S. Open was all but obliterated by her run-in with Ms. Ammaccapane after Thursday's opening round.

Ammaccapane and Wie were grouped together because both were winners of the women's Publinx championship. (Wie won the event two weeks ago, becoming the youngest person ever to win an adult USGA event.)

Despite the common bond, friction between the 37-year-old and the teen surfaced early, according to Parkes. On the 14th green (the group started on the 10th tee), Ammaccapane accused Wie and her father (and caddie) of walking in her extended putting line. Then, later in the day, Wie hit an approach shot "basically at the same time" as Ammaccapane, whose shot landed in a greenside bunker. "I felt it was totally inadvertent," Parkes said by phone Monday. "But Danielle was not very pleased."

The two said little to each other as the round went on. "You could tell there was a tension there," Parkes said.

In the scoring tent after the round, Ammaccapane gave Wie a "talking to," according to USGA executive David Fay. "Danielle chastised Michelle about her etiquette," Parkes said, though she did not use profanity.

The Wies told the Associated Press that Ammaccapane, 37, said to the teenager: "You're the worst kid I've ever seen play golf. You'll never make it to the LPGA. I will make money. You will not.''

Danielle Ammaccapane has repeatedly declined to comment on the issue, but her father Ralph told the Arizona Republic that his daughter talked to Michelle in the locker room after the outburst in the scoring tent.

"Danielle thought she might have been a little too harsh, so she talked to her again in the locker room," he said. "She tried to soften what she had said earlier and explain to Michelle how things work on the LPGA Tour."

The next day, Mr. Wie accused Ammaccapane of bumping his daughter during the first round -- a charge he later retracted. Friday's second round, according to a walking rules official, was "frosty."

Danielle Ammaccapane's only comment to the Associated Press on Friday was that if B.J. Wie was
going to say bad things about her, "He's going to get an ear full from my father.''

Saturday morning, according to B.J., Mr. Ammaccapane was perched in front at the clubhouse as the Wie family arrived with hired pro Gary Gilchrist. "Michelle was scared," Mr. Wie said. "She was very worried and angry. She had never been harassed by anyone." Not surprising, considering Michelle has never even seen an R-rated movie.

Reached by phone Sunday night after her final-round 76, Wie said, "I've never been so humiliated in my whole life."

Wie has had a pristine reputation among competitors old and young up until this weekend. Amateurs, LPGA pros and even PGA Tour vets have consistently raved about her ability and her behavior. Only two weeks ago, mother Bo mentioned that she could not remember the last time she had to punish Michelle for anything.

Much as Tiger became subject to increased scrutiny as he continued to make headlines, Wie is now being exposed to the negative side of all the attention she's receiving.

Now, years later, one of Tiger's biggest fans is following right in his footsteps. Perhaps more than anyone since Tiger's ascent -- for better and for worse -- Michelle Wie is learning quickly what "I am Tiger Woods" really means.

Eric Adelson is a staff writer for ESPN Magazine. E-mail him at eric.adelson@espn3.com.