ST. ANDREWS, Scotland -- The road is appropriately and simply called The Links. It runs in front of the Old Tom Morris Golf Shop and along the 18th fairway of the Old Course, an ancient street that has felt the clatter of golf spikes back to the days of gutta percha balls.

A white fence separates grass from pavement, and hundreds if not thousands of fans were pressed up against it early Monday evening as the sun set on the old town and the Champion Golfer of the Year made his way toward them.

Zach Johnson, the 144th Open champion, Claret Jug in tow, was high-fiving spectators as they touched the oldest and most famous trophy in golf.

It was a nice scene at the end of a brutally difficult day and week that ended with Johnson holding the hardware, giving him two major victories in an underrated and underappreciated career.

Johnson could barely speak in the moments afterward with tears flowing and hugs for his wife, Kim, and longtime caddie Damon Green. His eyes were glossy and red, the enormity of the moment impossible to grasp.

"Dreams have been realized, goals accomplished," Johnson said at the awards ceremony after his playoff victory over Louis Oosthuizen and Marc Leishman. "I'm grateful and humbled. Honored. That jug means so much in sports."

And now, with a final-round 66 on the Old Course, followed by a 1-under-par effort in the aggregate playoff, Johnson's name is engraved alongside the likes of Jones, Snead, Hogan, Palmer, Nicklaus, Trevino, Watson, Woods, Mickelson and many, many more. 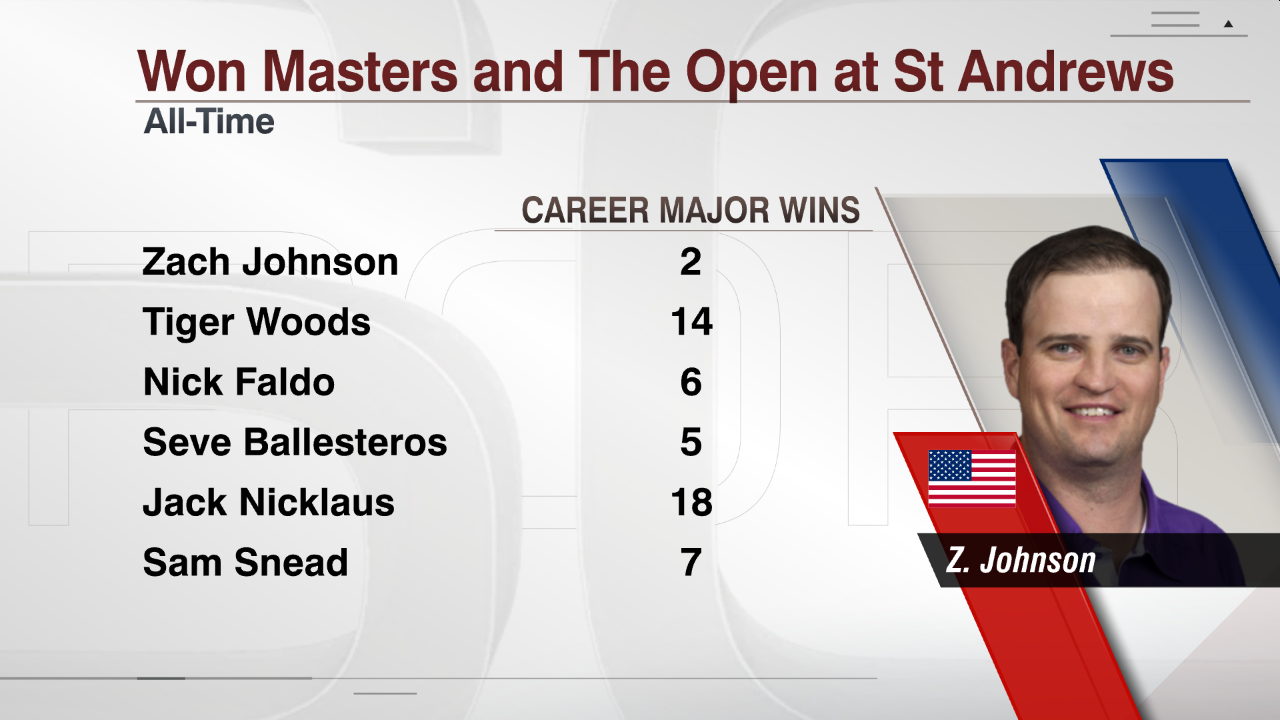 Jordan Spieth came up a shot short, his Grand Slam dream denied at the same place where Arnold Palmer came 55 years ago seeking the modern slam, a different version than the one achieved by Bobby Jones in 1930 -- the first leg of which was achieved at the Old Course.

Nobody asked Johnson why he played in the John Deere Classic a week ago -- finishing a shot behind Spieth. But there he was hanging around all week, falling off the pace Sunday on a rather easy day for scoring, then charging up the leaderboard Monday.

"I get choked up every time I talk about," Green said. "It's St. Andrews, the home of golf. It's huge to get your name on that trophy."

At that moment, Johnson came over behind the 18th green with the Claret Jug, and the two posed for photos. In some ways, it was just as emotional for Green, who has caddied for Johnson for the past decade, including his Masters victory in 2007.

That win put Johnson in some elite company: He's one of just six players to win at Augusta National and the Old Course.

"It was very eerie because today was very similar to the way he played the last round at Augusta," Green said. "He was eerie calm. Really calm. Usually if he gets nervous he'll ask me to feel his heart. Today he was cold-blooded."

And he had to be. Look at all the players in contention. Spieth and Jason Day and Sergio Garcia and Adam Scott all had their runs.

Leishman has just one PGA Tour victory, but the Aussie hardly seemed rattled by the pressure, matching Johnson's 66 and nearly winning the tournament when he narrowly missed a birdie at the 18th.

And how about Oosthuizen? The South African won the Open here five years ago. He lost in a playoff to Bubba Watson at the 2012 Masters. He was second to Spieth last month at the U.S. Open.

"Those names, they're well-accomplished," Johnson said. "They're champions. They're not going to back down. I clearly had to be somewhat aggressive early on in the day."

And he was. Johnson made birdies at the second, fourth, fifth, seventh and ninth holes to shoot 31 on the first nine. He added birdies at the 10th and 16th to take the outright lead, then faced the daunting six finishing holes into the wind.

Finding a pot bunker at the 13th led to a bogey. He failed to birdie the par-5 15th, then ran into trouble when he slipped on his second shot to the brutal par-4 17th Road Hole. That bogey dropped him behind, and then the birdie at 18 -- where Green gave him a read from putts he had seen there over the years -- put him in position to be in a playoff.

Spieth and Day failed to match him; Leishman and Oosthuizen did. Johnson birdied the first and second holes of the four-hole playoff, then hung on for the victory. 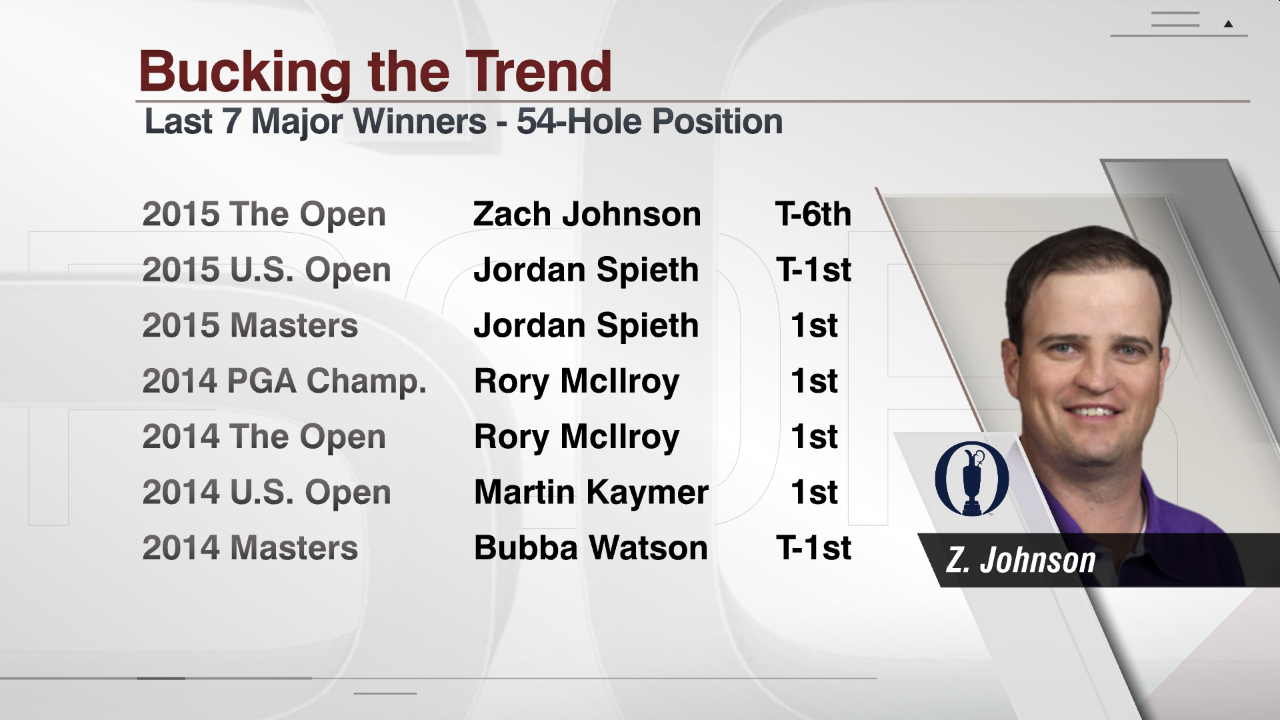 Johnson is an unlikely two-time major champion. He worked at an Olive Garden to make ends meet. He grew up in Iowa and played for Drake, hardly a golf power. When he turned pro, he needed financial backing to endure golf's minor leagues.

His victory at the 2007 Masters was the first time that Tiger Woods played in the final group of a major and did not win. Johnson, at the time, had just one PGA Tour victory, but shot 69 on a brutally cold April Sunday to secure the green jacket.

"These are things you dream about," Johnson said. "These are the things you've worked to get to. I'm humbled right now by what's in my lap and the names that are etched on this piece of metal. This is very special. It's the who's who in the game. It's the guys who paved the way. It's the individuals who are historic in sports."

Now he has 12 victories, including two majors, perhaps warranting consideration for the World Golf Hall of Fame.

Whether or not that happens, Johnson has memories of Monday to fall back on. He addressed the spectators who stayed in the grandstand to listen to his victory speech, a cool setting as he looked down the first fairway with all manner of people surrounding the iconic holes that are the beginning and end of the Old Course.

It was a picture worth framing, a scene to never be forgotten. They hailed him at the home of golf, a place where champions are respected and revered, and where he honored them with his own little victory parade along The Links.