For a few weeks in the summer of 1925, in several tournaments around his native Philadelphia, an old name resurfaced in the golf scores. He was only 33 years old, but more than a decade had passed since he had left the sport. Not many people remembered what he had achieved, and fewer still knew what had become of him. Yet from out of somewhere, pulling up the caboose end of fields that he once would have ruled -- the Philadelphia Open, Shawnee Open, Pennsylvania Open -- there he was. 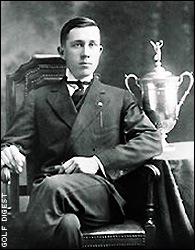 He had been the best golfer in the United States -- eager to practice hard, and even more keen to beat you -- who fought for the honor of American golf as if he were trying to conquer Bunker Hill instead of a few bunkers. He was a magician with the mashie. Jack Burke Sr. told columnist Red Smith a story about the man's legendary accuracy with his irons, how he could hit a few dozen balls and gather them simply by folding up the newspaper he had used as a target.

"Oh, any tabloid would do," Burke said.

Now his behavior, not his shotmaking, was out of the ordinary. He was sullen one minute, laughing oddly the next. He was yesterday's news, a listing in tiny type.

Until John J. McDermott, a tough and talented man from working-class Philly, came along, the U.S. Open was ruled by the British as though it was some distant colony. Immigrant or visiting golfers from Great Britain claimed the first 16 U.S. Opens, but McDermott changed America's luck. After losing a playoff in 1910 when he was only 18, McDermott, at 19 years and 10 months, won the 1911 U.S. Open at Chicago GC. He successfully defended his title in 1912 at the CC of Buffalo, becoming the first golfer to finish the championship under par.

Golf was just being unwrapped in America, and McDermott held the ribbon in his hands. He was winning $1,000 challenge matches when a house in his neighborhood rented for $20 a month. Companies paid him to endorse their products, a first for an American-born golfer. Resort guests ponied up $100 for the privilege of playing with him. At a time when most American clubs still preferred that Brits hold forth, McDermott had a coveted job at Atlantic City CC.

Then, a little more than two years after McDermott won his second consecutive U.S. Open, on Dec. 5, 1914, there was news from the Jersey shore. "McDermott Retires From Seashore Job. Noted Golfer Leaves Atlantic City Country Club -- Sticks Are Sent Home. Friends say McDermott will quit the game for a while."

McDermott was born Aug. 12, 1891, the son of a mailman who settled his young family in West Philadelphia, a streetcar suburb so packed with Irish immigrants -- the population more than doubled from 1900 to 1920 -- your neighbors could hear you dream. Amid the bustle, McDermott discovered golf at the old Aronimink GC, then located near his grandfather's farm not too far from where McDermott lived with his father, John Sr.; mother, Margaret; and sisters, Alice and Gertrude, at the orderly address of 1234 S. 50th Street. A caddie by age 9, McDermott was befriended by Aronimink pro Walter Reynolds, but McDermott loved the loneliness of golf.

"There was an apple orchard along the seventh fairway," remembered Morrie Talman, a fellow caddie and one of McDermott's few friends, "and Jack had laid out a practice area with three or four tin cans for cups. All our free time, we were there. But if any other caddie came in the orchard, Jack would just walk away."

McDermott dropped out of high school after his sophomore year to pursue golf against the wishes of his father, who wanted him to study a trade. With Reynolds' help he learned how to make clubs and give lessons, but he was drawn to playing the game and absorbed in its challenges. "Golf was McDermott's life," James Finegan writes in A Centennial Tribute to Golf in Philadelphia. "He rarely drank, and though an excellent 'buck and wing' dancer, he seldom dated. There is sketchy evidence that he was once engaged to a girl in Boston, but nothing came of it and he never married."

After a short stay at Merion, McDermott held jobs at Camden County CC and Merchantville CC in New Jersey. He later applied for the pro's position at Philadelphia Cricket Club, site of the 1910 U.S. Open, but the job went to Scot Willie Anderson, the four-time U.S. Open champion who wanted the position so he could learn the course (the tactic didn't work; Anderson finished 11th and several months later was dead, at 30, of hardening of the arteries). In 1909, when he was just 17, McDermott finished fourth in the Philadelphia Open and the next year beat Anderson by one stroke to win the title.

McDermott stood 5-foot-8 and weighed 130 pounds, but he had the hands -- broad, with long, strong fingers -- of a larger man. His clubs had oversized handles, and he utilized an unusual grip in which the pinkie and ring fingers of his right hand overlapped his left so that only eight fingers touched the club. He played the ball back of center, cocked his wrists early and used his big muscles more than the Brits. His face contorted at impact, his mouth agape, as if trying to marshal energy into the hit. "Every time he made a full swing at the ball, he would give a little 'Ah-eeh,' " says Jerry Pisano, a Pennsylvania pro who played regularly with McDermott many years later. "I never forgot that. Almost like one of those karate-chop things."

McDermott's right side chased down the line after impact in a move that was ahead of its time, a tendency that may have contributed to his pinpoint control. "I have never seen a man who, when called upon to hit a ball a given number of yards, could do so with such damned irritating consistency," said Ted Ray, the 1912 British Open champion who witnessed the full fury of McDermott's skill when he and fellow Englishman Harry Vardon were routed by the young American at the Shawnee Open in the summer of 1913. Still, like all golfers of the day, McDermott was a handsy player. "Like a man flicking a fly from a horse's back," A.W. Tillinghast wrote in 1911. "McDermott used his wrists. He is the best exponent of the value of the wrist in America today, and this, coupled with his supreme confidence, is the secret of his astonishing play."

Just how brash was McDermott? After losing the 1910 U.S. Open playoff by four strokes to Alex Smith, according to John Kiernan of The New York Times, McDermott wasn't in the mood to be consoled.

"I'll get you next year, you big tramp," McDermott responded.

McDermott kept his promise, although he put himself in a hole with a first-round 81 the following June. He rallied quickly with a 72 in the afternoon. The final 36 holes the next day were contested in a driving rain. At the end of 72 holes, McDermott was tied with George Simpson and another homebred hopeful, Mike Brady, at 307. McDermott's quest for a quick buck (a $300 bonus offered by the maker of the Colonel ball brand) nearly was disastrous. He switched from his usual Rawlings Black Circle model on the first hole of the playoff and immediately hit two shots out of bounds. But he recovered to shoot 80, beating Brady by two shots and Simpson by five.

In the Philadelphia Inquirer, McDermott's historic victory -- "This is the first time a native-born golfer has won the honor" -- shared space with longer stories about Connie Mack's baseball Athletics and Charles Durburrow's eight-mile swim "from Million Dollar Pier to Ocean City in Rough Sea." McDermott's age was incorrectly reported as 21.

The following year, still not yet 21, McDermott repeated his success by beating 128 golfers in Buffalo -- the first time the Open field topped 100 -- with a 294 total, two better than Tom McNamara. The key blow was a 5-iron on the 155-yard 16th hole to 10 feet, which allowed him to play the final two holes with a two-shot cushion.

McDermott's U.S. Open defense made up for a dreadful attempt in the 1912 British Open. Able to travel across the Atlantic thanks to donations from an admiring public, McDermott crowed that he was going to make history abroad as well. Exhibitions got McDermott acclimated to links golf, and he felt comfortable enough to play, as he did at home, without a jacket, but you couldn't have guessed it from his qualifying round at Muirfield. His reliable draw turned into an uncontrollable hook in the heavy wind. He didn't break 90 and failed to make the field.