Just below golf's big this or that is the best player who ever said, "I was never destined to be the star, I just wasn't."

Paddy Harrington of Dublin. For Sergio Garcia, Adam Scott or Darren Clarke, the next step will require a surge in ability. Only for Harrington, it is just a leap of faith. 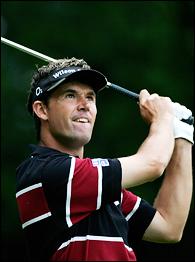 He is the son of a policeman who, with a gang of other cops, built a little course called Stackstown that served as a playground for his five sons: Tadhg, Columb, Fintan, Fergal and Padraig. Paddy received his first formal lessons at 15. His first informal ones, he took from the cop, who never spoke of swings or stances but showed him how to think his way around a golf course. "That's always been my main skill," Harrington says.

His father had been a Gaelic footballer, who twice made it to the title game, and twice was a runner-up. Yet the old man looked back with no regrets. "There are good seconds and there are awful seconds," says Padraig, who should know. To go with his 13 pro victories worldwide, he has come second 27 times, including back-to-back Players Championships in 2003 and '04 and seven European tour events in 2001 alone.

"I don't think just of the big tournaments," says Harrington, who has finished in the top five at The Masters, the U.S. Open and the British Open. "I think of all the things that have ever happened to me in golf. They're all still in the front of my mind. I don't push anything to the back. That's my makeup. That's me." His "most hurtful second" was in the Irish Youths at 18, just yesterday. "With four holes to go, I relaxed, had it won, but then I dropped three shots and lost. When I was under the pressure and intensity, I played well. But I let down my guard. And, you know kids, they don't hold back. I heard a lot of things from a lot of people. That's as bad as it ever got."

The next year, early in the year, he returned to the same course for a less important event. "I had done so much practicing in the winter, I had no stock shot, if you know what I mean. I was confused. 'Am I trying to draw it? Am I trying to fade it?' Coming to the 18th, I had the biggest choke of my life. I winged my drive left into the woods, had a go in there and hit a branch up in the air, one of those balls that comes down 30 seconds later. It landed a foot away from a fairway bunker 100 yards short of the green. I just swung. Somehow it came down right next to the pin. I tapped in to win, and all of those same kids patted me on the back and told me how much courage I had. I'd hemorrhaged my way the entire length of the hole. At the moment it ended, I couldn't have told you my name. That was an important lesson."

Now that he is 33, the lessons are coming faster and more furious. "At Doral, I shot six under. What won? [Twenty-four under.] Where did I finish? [Tied for 52nd.] If I was a rookie, I would have gone home, saying, 'You're not good enough.' The following week at Honda, I won. Obviously a few more putts went in, but honestly I played about the same. People said, 'Well, you broke through in America,' but Vijay [Singh] could have holed a 15-footer on the first playoff hole -- out of my control, nothing to do with me, nothing at all -- and the headline would have been a 28th second place."

On TV afterward, Harrington mentioned how Ernie Els' comeback in Qatar that morning had stirred him. "I normally keep those things private, you know? But it was funny. Ernie shot 73 in the first round. I shot 73. He shot 69 in the second and third. I did, too. He shot 65 in the last. I shot 63." Paddy was finally comparing himself to the first tier. "There's the Big Five," he says, "and a few of us behind. I just have to believe there's something great ahead for me. I'm ready to play now."

The spring has been bitter. The cop has cancer. Paddy wants to stay with his dad, and the old man wants to watch his boy on television. This gentle tug-o-war will go on for a while, but before long, Padraig Harrington will make some history. He does belong.

Tom Callahan is a contributing editor for Golf Digest magazine