Even with a half-inch of rain on the eve of the championship and
several hole locations that showed a compassionate side of the
USGA, Nick Dougherty and Angel Cabrera were the only players who
managed to break par Thursday in an opening round that left players
wondering if the worst was ahead of them.

Dougherty, a 25-year-old from England, played in the fourth
group of the still morning and quickly raised hopes of ending a
European drought in the majors that stretches back to 1999. He took
only 11 putts on the back nine in his round of 2-under 68, a score
not many thought possible earlier in the week.

"I think the course is -- I hate saying it -- easy," Dougherty
said, sounding like that might come back to haunt him. "Goodness,
I shouldn't have said that. No, absolutely not. The course is
barbaric."

Cabrera was one of only two players who reached 3 under, and
lost a share of the lead with a bogey on the 313-yard 17th.

Woods holed a 12-foot birdie putt on the sixth hole that put him
1 under, his first time in red numbers at this major since the
second round at Pinehurst No. 2 in 2005. He gave it back two holes
later and never caught up to par. 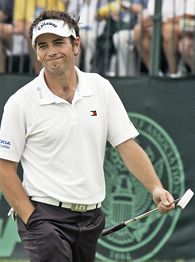 "It's as easy as it's going to play, and it's still pretty
hard," Woods said. "Imagine if it didn't rain last night."

With greens that Olazabal described as rock-hard only a day ago,
Oakmont was softened by the Wednesday night thunderstorms and cloud
cover through the better part of the morning. The greens were still
fast, but players had to guard against too much spin with a wedge
in their hands, and some longer irons didn't roll too far away.

Phil Mickelson didn't make a birdie in his round of 74. He
didn't break his wrist, either.

It was his highest opening round at the U.S. Open in 10 years,
and all things considered, it wasn't too bad. Mickelson, dealing
with inflammation in his left wrist that requires him to wear a
brace, played 18 holes for the first time since he won The Players
Championship. He didn't have many looks at birdie, but he played
the final eight holes without a bogey.

"We've got a long ways to go," he said. "I just need one good
round tomorrow to get me in it for the weekend. I fought the last
eight holes to keep me in it, and if I do well tomorrow, that's all
I care about."

There wasn't anything too crazy at Oakmont, other than Tom Byrum
hitting through the ninth green and into one of the holes on the
putting green. He got a free drop and escaped with par.

There weren't too many spectacular crashes, just high scores.
Seventeen players failed to break 80, while Sergio Garcia parred
his last three holes to shoot 79. Masters champion Zach Johnson
shot 76 and wasn't sure what to think about it.