OAKMONT, Pa. -- The only thing Angel Cabrera couldn't
conquer at this U.S. Open was Oakmont.

That was much tougher than Tiger Woods.

Cabrera hit all the right shots at the right time Sunday, none
bigger than a booming tee shot down the middle of the 18th fairway
that stopped a late slide, allowed him to post a 1-under 69 and
forced Woods and Jim Furyk to catch him.

For the second straight major, Woods couldn't buy a birdie.

Cabrera became the first Argentine in 40 years to win a major,
powering his way to a pair of birdies on the back nine that turned
into a one-shot victory over two of the best players in the world.

"It is very difficult to describe this moment," Cabrera said.
"Probably tomorrow, when I wake up with this trophy beside me, I
will realize I won the U.S. Open."

He is not the player anyone expected to take down Woods.

But neither was Zach Johnson at the Masters.

OK, so Cabrera is not a normal guy from Cedar Rapids, Iowa. He
is a former caddie at Cordoba Golf Club in Argentina, who dropped
out of elementary school to provide for his family and figured golf
was his only hope to make a decent living. He fits the image of
Pittsburgh tough, big and burly, walking down fairways while
puffing on a cigarette.

"There are some players that have psychologists," Cabrera
said. "I smoke." 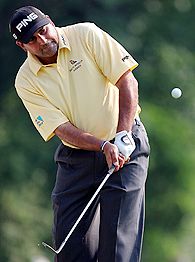 Cabrera wore a smile to hide his nerves as he sat in the
clubhouse and watched Furyk fall out of a share of the lead on the
17th hole by trying to drive the green 306 yards away. The shot
went into deep rough left of the green, his flop shot came up short
and his 8-foot par putt swirled around the lip.

That left only Woods, who needed a birdie over his final three
holes to force a playoff.

He did well to two-putt for par on the 244-yard 16th. His bunker
shot on the 17th went over the green and made him again grind out a
par, and a tee shot he thought was perfect on the 18th instead
straddled the first cut and thick rough right of the fairway. Woods
hit wedge that went 30 feet beyond the pin, and his birdie putt was
too strong.

Once again, just like at the Masters, Woods was the last player
to walk off the 18th green with the trophy belonging to someone
else.

"Finishing second is never fun," Woods said after closing with
a 72. "You play so hard, and it's just disappointing."

Furyk became the first player since Arnold Palmer in 1966-67 to
be a runner-up in the U.S. Open in consecutive years. A year ago at
Winged Foot, he failed to convert a 6-foot par on the final hole
that left him one shot behind Geoff Ogilvy.

Cabrera not only beat the No. 1 and No. 3 players in the world,
his birdie on the final hole Friday caused No. 2 Phil Mickelson to
miss the cut in a major for the first time in eight years.

The big-hitting Argentine earned this one.

"I beat everybody here, not only Tiger Woods," Cabrera said.
"But I wasn't able to beat the golf course. The golf course beat
me."

Oakmont turned into a survival test with its thick rough and
scary greens, although Cabrera handled it better than anyone. Of
the eight sub-par rounds all week, he had two of them, and finished
at 5-over 285.

And yes, he signed for the right score.

The only other Argentine to win a major was Robert de Vicenzo in
the 1967 British Open at Hoylake, where he held off Jack Nicklaus
with a daring 3-wood on the final hole. De Vicenzo is equally
famous for signing for the wrong score a year later at the Masters,
keeping him out of a playoff.

Woods, a runner-up to Johnson at this year's Masters, played the
final 32 holes at Oakmont with only one birdie.

"He put a lot of pressure on Jim and I, and we didn't get it
done," said Woods, who extended his dubious streak of never
winning a major when he wasn't leading going into the final round.

For Woods, this is becoming all too familiar for all the wrong
reasons. It was the second straight major he played in the final
group, only to see an unproven player take the lead, unable to do
anything about it.

He missed a 6-foot birdie putt on the 13th, and the only clutch
putts he made the rest of the way were for par.

Furyk, who grew up in western Pennsylvania, ran off three
straight birdies on the back nine and was tied for the lead when he
opted to hit driver on the 17th, where the tees were moved up. He
stood by his decision, shocked that the ball carried so far. The
rough was only part of the problem; Furyk had no angle to the pin,
and his delicate shot came a few yards short of the green.