UNIVERSITY PLACE, Wash. -- Three holes deep into the third round of the U.S. Open, Jason Day was ready to surrender to an opponent far more formidable than the Chambers Bay greens. He was tired, nauseous and groggy from the drugs pumped into his system to fight the vertigo that had dropped him to the canvas Friday and left him looking like he had just absorbed a Mike Tyson hook.

Day was not going to make it on his own. He needed a shepherd to guide him up and down the hills of a golf course treacherous enough to break the youngest and sturdiest of men, and he had the right one on his bag. Colin Swatton, his lifelong coach and caddie, stopped Day on the fourth hole to tell him this was no time to quit.

"You've got the heart of a lion," Swatton told his player. "You get to show the world today that you're going to be the greatest you can be. Look, let's do it."

So Day put his head down and took it one shot, one putt, one wobbly step at a time. The Mayo Clinic describes vertigo as "the sudden sensation that you're spinning or the inside of your head is spinning" and labels benign positional vertigo (Day's diagnosis) a condition "rarely serious, except when it increases the chances of falls."

Or when you're trying to beat the world's best golfers on a course that all but makes a player climb up and down Mount Rainier a half-dozen times.

No, Day wasn't going to get this one to the house without the right shoulder to lean on and the right voice in his ear. On Father's Day weekend, the man described as Day's father figure wouldn't let the 27-year-old Australian heed the inner voice assuring him it would be OK to give up. 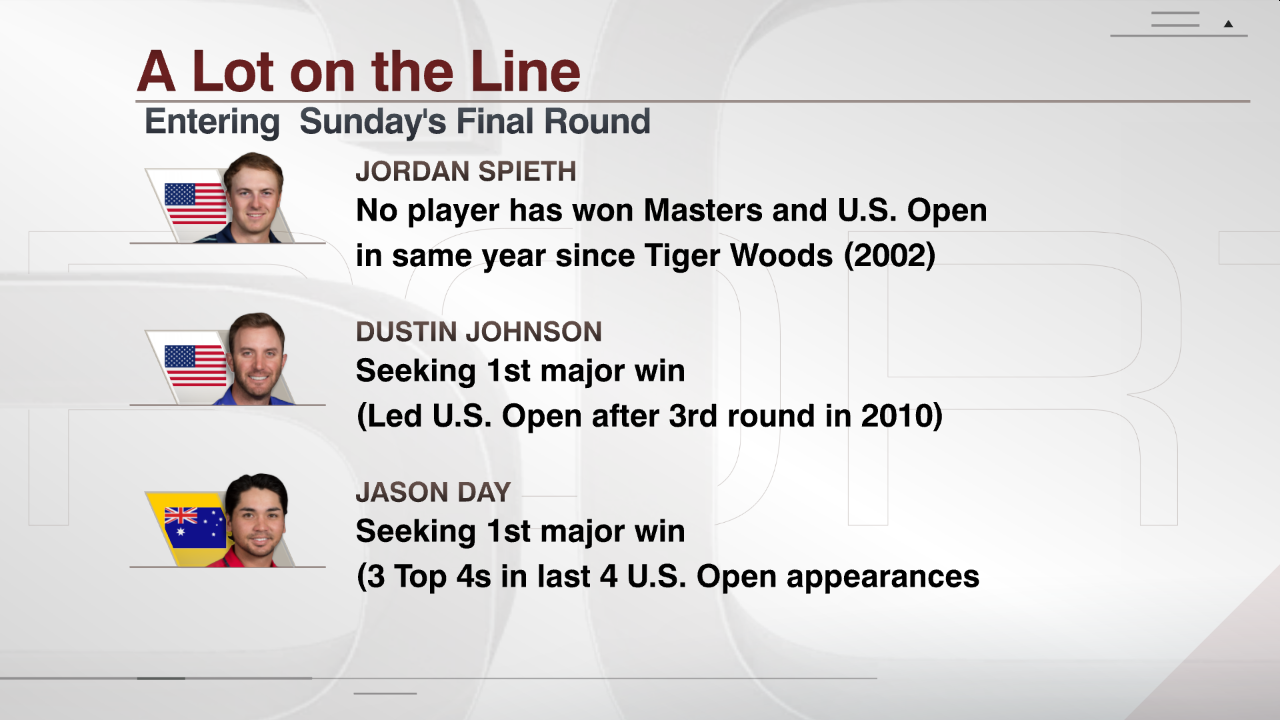 Day nearly called it a day at No. 4 and again at No. 7, yet he kept staggering and lurching forward in true zombie form. He kept backing away from his ball to realign his rapidly blinking eyes. He wouldn't move a muscle or turn his head without carefully considering the consequences. The simple act of bending over to retrieve his ball or tee drained his overheated battery, and sometimes Swatton's body weight was all that separated Day from another dramatic fall to the ground.

The vertigo blitzed Day on the 13th tee, and it left him shaking at No. 16. "I just wanted to get it in," the golfer would say of his round, and millions of transfixed viewers were willing him across the finish line. Somehow, some way, Day wasn't just surviving out there; he was thriving. Honest to God, he was tearing up the U.S. Open, sinking putts from all over and, ultimately, birdieing three of his final four holes to shoot 68 and share the lead at 4-under.

Day's 31 on the back nine Saturday was no less impressive than Jack Nicklaus' 30 on the inward nine at the 1986 Masters. The U.S. Open had not seen a contender in this kind of distress since an exhausted Ken Venturi won on a 36-hole day at Congressional in 1964, after a doctor told him he'd be risking his life if he played the final 18 in the oppressive heat.

Nobody told Day he was risking any such thing after Friday's frightening fall at No. 9, yet Swatton was never sure the player he has been teaching since age 12 could summon the will to stay in the tournament. The caddie kept feeding Day food, water and words of reassurance -- whatever he felt would keep the man upright.

"Just tried to get him through," Swatton said after it was done. "I said to him, 'They might make a movie about that round' ... It was up there with Tiger Woods playing with a broken leg at the [2008] U.S. Open."

It was up there with Curt Schilling pitching through the pain and blood in the 2004 postseason and Michael Jordan playing through the flu in Game 5 of the 1997 NBA Finals. Day made a long birdie putt at the 17th and recovered from a wayward drive at the 604-yard, par-5 18th to land his third shot close to the pin and draw thunderous applause from the grandstand.

He sank the putt, managed a weary wave of acknowledgement and wiped the eyes he'd been rubbing all day.

"That was the greatest round of golf I've ever watched," Swatton told him. "That was a superhuman effort."

Day said the same case of vertigo that knocked him out at Firestone last year wasn't as severe as the one that hit him over the past two days, and as the golfer sought treatment in a trailer between the players' locker room and practice range, Swatton stood inside a circle of reporters near the compound and confirmed he'd never seen Day in such a weakened state.

The 45-year-old caddie had spent the day managing his player's stress, and it took a heavy toll on him too. Day was sent to his golf academy 15 years ago, after the boy's father, Alvin, died of cancer the same year Swatton lost his own father, Alan, to the same disease. Day and Swatton have talked about their shared pain. No matter the outcome on Father's Day at Chambers Bay, they'll both be dealing with the worst kind of void.

"That's the biggest thing about losing your dad," Swatton said. "He can't be there for your special moments."

As a teenager, Day made himself a prospect by outworking more talented kids on Swatton's range. He read Tiger Woods' book, "How I Play Golf," and decided he wanted to someday win tournaments like the one and only.

Day hasn't won a big one yet. He has managed five top-five finishes in majors. But if he wins his first Sunday, chances are it will feel like he has won the career Grand Slam. 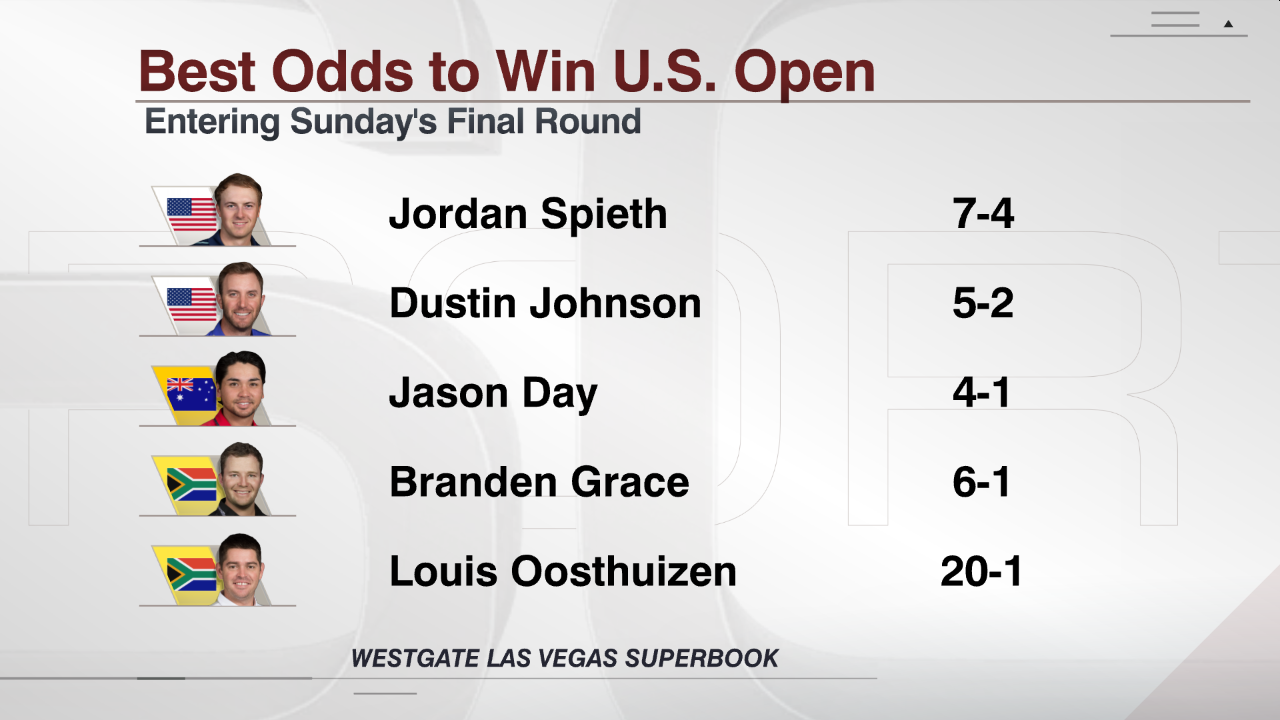 No, it won't be easy. Jordan Spieth is chasing the second leg of that Grand Slam, and Dustin Johnson is an ultra-athletic slugger who can win in a ballpark this big. But if Jason Day was strong enough Saturday to hit the ball better than he had the first two days and drop five birdie putts on the back nine -- with his head spinning, no less -- who could possibly bet against him Sunday?

Day wouldn't even accept the offer of his fellow competitor, Kevin Kisner, to pick his golf ball out of the cups.

"When you're making birdies," Kisner said, "I don't care how bad you feel. You want to pick it out of the hole."

Day has something else on his side too. His caddie is such a dead ringer for a younger Jack Nicklaus that the Golden Bear's wife, Barbara, approached him at a Palm Springs hotel 10 years ago thinking Swatton was her spouse.

"And when I turned around, she said, 'Oh, I'm sorry,'" Swatton recalled with a laugh. "Jack came down a few minutes later."

Nicklaus won the Masters at age 46, Woods beat Rocco Mediate in that Torrey Pines playoff on one leg, and Venturi conquered his survival test at Congressional, all among the game's greatest major championship feats.

Now Day has a chance to put his name right next to theirs.

"But whatever happens tomorrow," Swatton said as the sun started to fade on an indelible Saturday at the U.S. Open, "what just happened will always be remembered as an amazing round of golf."

This is true. Win, lose or withdraw on Father's Day, nobody can take this U.S. Open moment from Jason Day and the wise man who shepherded him home.