UNIVERSITY PLACE, Wash. -- The white folding chair was empty. It was reserved for U.S. Open co-runner-up Dustin Johnson, but by then he and his small, stunned entourage had already slipped into their courtesy car and made their way out of the graveled players' parking lot at Chambers Bay.

He could have stuck around and received his second-place medal. He could have watched Jordan Spieth kiss the U.S. Open trophy. Instead, he kissed his fiancé, Paulina Gretzky, and then held his young son, Tatum, on a Father's Day that he'll never forget -- no matter how hard he tries.

Johnson lost another major. He'll celebrate his 31st birthday on Monday knowing that it could have been ... perhaps should have been him -- and not Spieth -- hoisting that trophy Sunday night. By now he could have four major championships. Instead, he has zero.

"I tried my damnedest to get in the hole and I just couldn't do it," Johnson said.

He said this while standing just outside the players' locker room. A few minutes earlier he had made his way from a shuttle bus dropoff to the players' compound. His shirt was untucked as he walked slowly with Gretzky, his agent, and his brother and caddie, Austin. Three kids and an adult stood with pens and hats out as he entered the compound. Johnson signed every one.

Of course he is. Johnson had a 3-stroke lead entering the final round of the 2010 U.S. Open ... and shot an 82. He was in the lead entering the final hole of the 2010 PGA Championship, but was assessed a 2-stroke penalty for grounding his club in a bunker ... and missed the playoff. He trailed the leader by 2 strokes when he stepped to the 14th tee box in the final round of the 2011 Open Championship, but double-bogeyed the hole and finished tied for second.

You can call it a choke, I suppose. A collapse. Johnson did bogey three of his last nine holes. He had the Sunday lead and lost it. He had his chance on No. 18 and missed it. Twice. 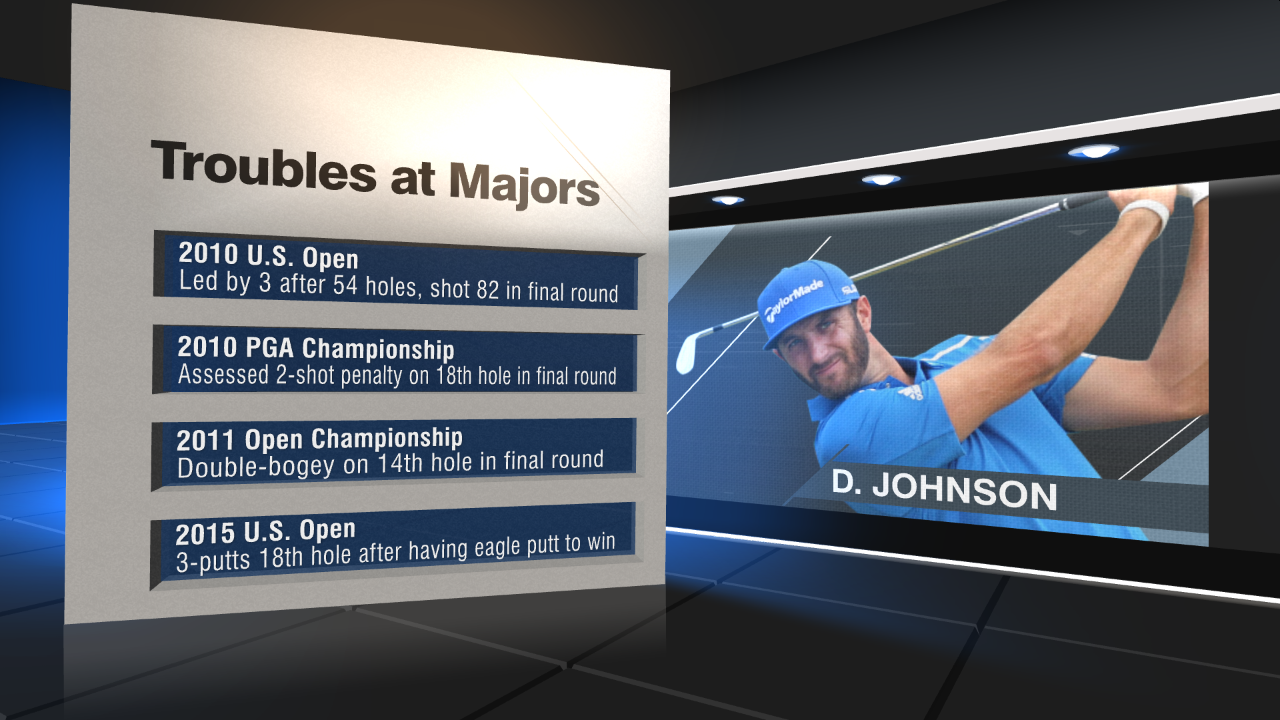 But it's hard to bash a guy for missing putts on those Chambers Bay greens. I'm sorry -- browns. If anyone deserves to get bashed -- and they did, repeatedly, by departing players -- it was the USGA and its decisions related to the greens.

Johnson didn't use the horrific condition of the greens as an excuse.

"If I rolled the putter halfway decent today ... just any putts go in the hole, I win this thing by a few shots -- it's not even close," he said.

Instead, Johnson finished with an even-par 70 for the day, 4-under for the tournament and 1 stroke behind Spieth, who is now halfway to the Grand Slam this year. Johnson is headed the other way: he needs a close Masters loss to complete the career Almost-Won Grand Slam.

Here's what the pressure of a major can do to you: Johnson hadn't 3-putted from 10-15 feet all year. But he did Sunday when it mattered most.

As he sized up that eagle putt to win it all, Johnson couldn't help himself. He told his brother on the 18th green: "This is exactly why I'm here. This is why I play the game of golf. I've got a chance to win the U.S. Open on the last hole."

Is there a crueler game than golf? The sport is the oldest living heart donor.

As Johnson finished up with the media, his brother sat at the edge of the gravel lot, head down, sunglasses on. Johnson's golf bag, the one that had Tatum Gretzky Johnson emblazoned on the side, was perched behind him.

Wynand Stander, the caddie for co-second-place finisher Louis Oosthuizen, walked over to console him.

Stander walked to Oosthuizen's courtesy car and glanced back at the caddie.

"That's from the heart," Stander said. "He should know that couldn't have happened to anyone. It could have been us."

But it wasn't. It happened to Johnson, who can't seem to get out of the way of heartbreaking finishes. It wasn't Jean van de Velde bad in the 1999 Open Championship. Or Greg Norman bad in the 1996 Masters. But it's going to leave a bruise mark for a very long time.

"I'm proud of the way I played," Johnson said. "I'm most proud of my family. So I get to hold up my trophy at the end of the day, which was my son."

That's sweet. But one of these majors, Johnson would like to hold up something else too.