OAKMONT, Pa. -- You wanted mental toughness, right? You wanted poise and heart and maturity and -- go ahead and say it -- you wanted to see a sign of intelligence too.

You already knew Dustin Johnson was a physical freak of golfing nature, a tee-to-green cross between Megatron and Gronk. But you doubted if he had the fortitude and the game day IQ to beat the real thinkers and grinders out there, the smaller, less explosive opponents who were sure to outsmart Johnson on America's most forbidding course.

You doubt no more. The haters doubt no more. Jack Nicklaus doubts no more. Johnson had just weathered a new USGA standard for absurdity and had birdied the 72nd hole of the U.S. Open to win his first major championship when Nicklaus approached him behind the final green at Oakmont, where the Golden Bear had taken down the King, Arnold Palmer, in their playoff in 1962.

"I thought what you did with all that crap they threw at you was pretty good," Nicklaus told the winner. 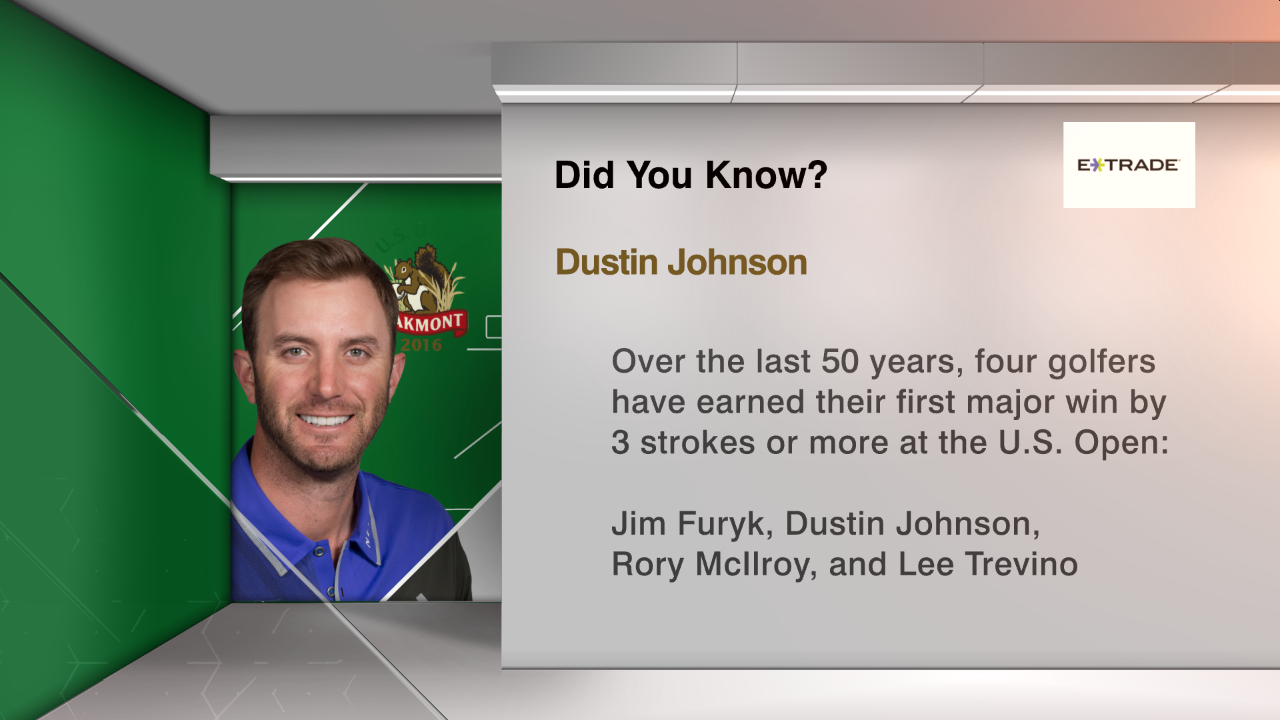 This wasn't a coach or a caddie or a commentator assuring Johnson that, at 31, he had finally come of age and shown the big-game resilience that was missing at Chambers Bay last year and at a whole bunch of majors before that. This was the greatest player of all time, a man who thought his way to 18 majors, telling Johnson he was proud of him.

This was the Golden Freakin' Bear welcoming DJ to the club.

What a remarkable initiation it was. You probably saw the video a half-dozen times. Johnson was on the fifth green, trying to track down third-round leader Shane Lowry, when he took a practice stroke, grounded his putter next to the ball and then positioned his blade behind the ball (without grounding it) before pulling it away as the ball moved slightly backward.

Golf isn't a game of inches; it's a silly game of millimeters. Johnson never made contact with the ball, and he told a rules official that he believed he'd done nothing to make the ball move. But on the 12th tee box, all that time later, an official approached Johnson -- who held a 2-shot lead -- to tell him he might be penalized a stroke. Might.

Johnson had blown a chance to win the 2010 PGA Championship by grounding his club in a Whistling Straits bunker that looked absolutely nothing like a bunker on any other corner of the earth, and it was one the PGA of America had allowed fans to trample through all week. This time, the USGA was placing a suspended boulder over Johnson's head for the final seven holes and threatening to flatten him with it, Wile E. Coyote-style.

Lee Westwood's caddie, Billy Foster, rubbed Johnson's shoulder in a show of encouragement. Johnson's own caddie and brother, Austin, said all the things a confidant is supposed to say in these situations: stay focused, don't worry about it, you can control only the next shot. But Austin admitted that he was thinking about Whistling Straits, and he believed his big brother was impacted by the possible sanction to come.

"It has to [affect him]," Austin said. "Now you've got seven holes to play in a major championship, and you're not sure if you're going to get a penalty at the end of the round or not. As good as he is at shaking stuff off, I don't know anybody who wouldn't be thinking about it. I told him not to, and it looked like he did a pretty good job of it, but I was thinking about it. I couldn't help it."

Two or three years ago, Johnson surely would've collapsed under the weight. This wasn't just about the Whistling Straits fiasco or the 82 he shot in the final U.S. Open round at Pebble Beach or other major opportunities gone with the wind. Golf.com reported that Johnson had been suspended by the PGA Tour after he tested positive for cocaine in 2014, and the player said he took a leave of absence "to seek professional help for personal challenges I have faced." He appeared to be a broken man, not just a broken golfer, and he returned from counseling promising to fix himself on both fronts.

His father-in-law-to-be, Wayne Gretzky, was at Oakmont earlier in the tournament telling people that he was proud of the man his daughter's fiancé had become. Gretzky wasn't there Sunday, Father's Day, and wasn't that a shame? He had lived through the Sunday collapses, and he felt the unbending heartbreak that was the 3-putt finish at Chambers Bay.

Gretzky would've been awfully proud of the way Johnson dug this one out of the corners. As leading tour players began annihilating the USGA on Twitter in a charge led by Rory McIlroy ("If it was me, I wouldn't hit another shot until this farce was rectified" was among his wicked line drives), Johnson kept his cool. He bogeyed only one hole down the stretch and put away Lowry and the rest of the field with the approach shot of his life on 18. The fans chanted, "Dee-jay, Dee-jay," and Johnson rewarded them by making the birdie putt. He hugged his 18-month-old son, Tatum, and his fiancée, Paulina.

Nicklaus told him what he told him and then called the USGA's decision to leave Johnson hanging at No. 12 "terrible" and "very unfair." Nicklaus wasn't finished teeing off on the U.S. Open's elders.

"In my opinion, golf is a game of honor," he said. "That's what the USGA believes in, and that's what most of the players all believe in. And when you have a situation where the official was there ... and said, 'Did you cause it to move?' and [Johnson] says, 'No,' then that should be the end of the story ... How's he supposed to know what caused it to move? You've got greens out there with spike marks and pitches. The ball can move at any time."

During the championship ceremony, Johnson was 4-under on the board but 5-under in the fans' hearts. They booed Mike Davis, USGA chief, and showered the winner with love. Nicklaus told Davis during the ceremony that the USGA had made a mistake, Johnson graciously accepted his Nicklaus medal as the champion, and under a fading western Pennsylvania sun, Paulina Gretzky beamed as her fiancé officially joined her family of champions.

"My dad loves what Dustin does because he admires it. He sees, and he loves going out there and playing golf," Paulina said. "And Dustin is, in a weird way, an idol to him. He just loves what Dustin can do. Dustin is a phenomenon, he really is. This is just the beginning."

Johnson spoke of knocking "a big monkey off my back" and of how he managed the controversy by constantly telling himself, "It's just you and the golf course." He admitted that he didn't understand a rule he's positive he did not break. "It didn't matter," he said, "at the end of the day."

All that mattered was Johnson's perseverance, his refusal to blink as he had in the past.

"He's really grown up over the last few years I've been on the bag," brother Austin said. "His golf course-management, his maturity. He used to just kind of run and gun it around the course, and now he manipulates his way around the course ... He just played brilliant golf. This course will eat you alive if you get out of position one second, and we didn't get out of position that often this week, and I know it made a huge difference for us."

On the 18th green at Oakmont, as the skies darkened, Austin Johnson pointed out that his older brother isn't any good at staying angry for long. "I've never seen him get pissed off," the caddie said.

Dustin Johnson didn't get mad at the USGA on Sunday. He got even. He won the U.S. Open and proved a lot of things to a lot of people by winning it with his brain instead of his brawn.