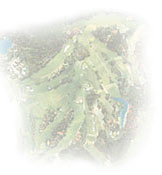 AUGUSTA, Ga. -- The journey reached its low point in the jungles of Borneo, a golfing hell where Vijay Singh could hardly envision reaching the pinnacle of his profession. Along the way, the native of Fiji honed his game in various obscure outposts, longing for the day he could pursue his dream without the burdens of his past. Little did he realize where the trip would take him: golf immortality. Playing in The Masters, let alone winning it, had to be the farthest thing from Singh's mind when he was giving lessons in the jungle, struggling on less than $200 a month, miles from civilization, let alone Amen Corner. And there was Singh on Sunday, shooting a 3-under 69 at Augusta National, holding off challenges from Ernie Els, David Duval and Tiger Woods, winning the coveted green jacket. "Walking up the 18th hole knowing that a two-putt is going to win is probably the greatest feeling I've had for a long, long time," said Singh, who finished three shots ahead of Els. "Wearing this green jacket tops it all. I can't describe the feeling. I'm sure it will sink in sooner or later." Singh, 37, has now won two of the last six major championships, nine PGA Tour events and 18 titles around the world on five different continents. Golfers in Fiji can barely get a glimpse of The Masters, let alone the chance to even play in the tournament. Singh never saw the tournament until he was a teenager, and then only on videotape because it was not shown live on television. Singh learned golf from his father in Fiji and won his first professional tournament at age 21, the 1984 Malaysian PGA Championship. But a year later, Singh's career hit bottom when he was accused of cheating after the second round of the 1985 Indonesian Open. The tournament director ruled that Singh improved his score by one shot before signing his card. Later he was indefinitely suspended from the Asian Tour. Singh has contended there was a "misunderstanding" and that he was unfairly punished. He denies altering his card. Regardless, the suspension meant he had to look for a way to survive. He took a series of club pro jobs in Borneo, where he spent the steamy afternoons when nobody wanted lessons working tirelessly on his own game. "I was out there in the jungle hitting balls and practicing in 100-degree heat and trying to think about what I'm going to do next," Singh said. "I had to earn some money so I could go out on the tour again. That was the lowest point. I don't even like to think about it. I never thought about coming to America, let alone winning a golf tournament here." One of the jobs was as a pro at the Keningau Club in Borneo, deep in the rain forest, where it was nearly a three-hour drive to the nearest town. During monsoon season, the town would be cut off for long periods. Singh earned the equivalent of $160 per month. The situation was bleak. Singh and his wife, Ardena, often went weeks without seeing people. They took water from a well. It was a long, long way from Magnolia Lane. "I cannot fathom how we managed to get from there to here," said Ardena Singh. Singh persevered. During the sweltering afternoons, when nobody considered taking a lesson from him, Singh hit balls. Thousands of balls. It is a habit that remains with him today. "I've never seen anyone work as hard as that man does," said Nick Price, a three-time major championship winner. "You talk to his caddies, anyone who lives in Jacksonville (near Singh's home in Ponte Vedra Beach, Fla.), the guy's torn up more practice tees. I wonder how much earth he's moved over the years. I don't know if Mr. (Ben) Hogan practiced as hard as Vijay did. Certainly no one in my era even comes close to him." Some journey.

Bob Harig, who covers golf for the St. Petersburg Times, writes a column every Tuesday for ESPN Golf Online.