DALLAS -- "Do something with it, Baby Bron!" a man yelled from the crowd.

"We need to see it!" a frustrated spectator shouted as the kid they all came to see missed his first two shots, an errant layup and a 3-pointer that crashed off the backboard. "You ain't got one all day!"

When he ran onto the court with his teammates before the game, the crowd collectively rose and turned into paparazzi, snapping pictures with their smartphones. 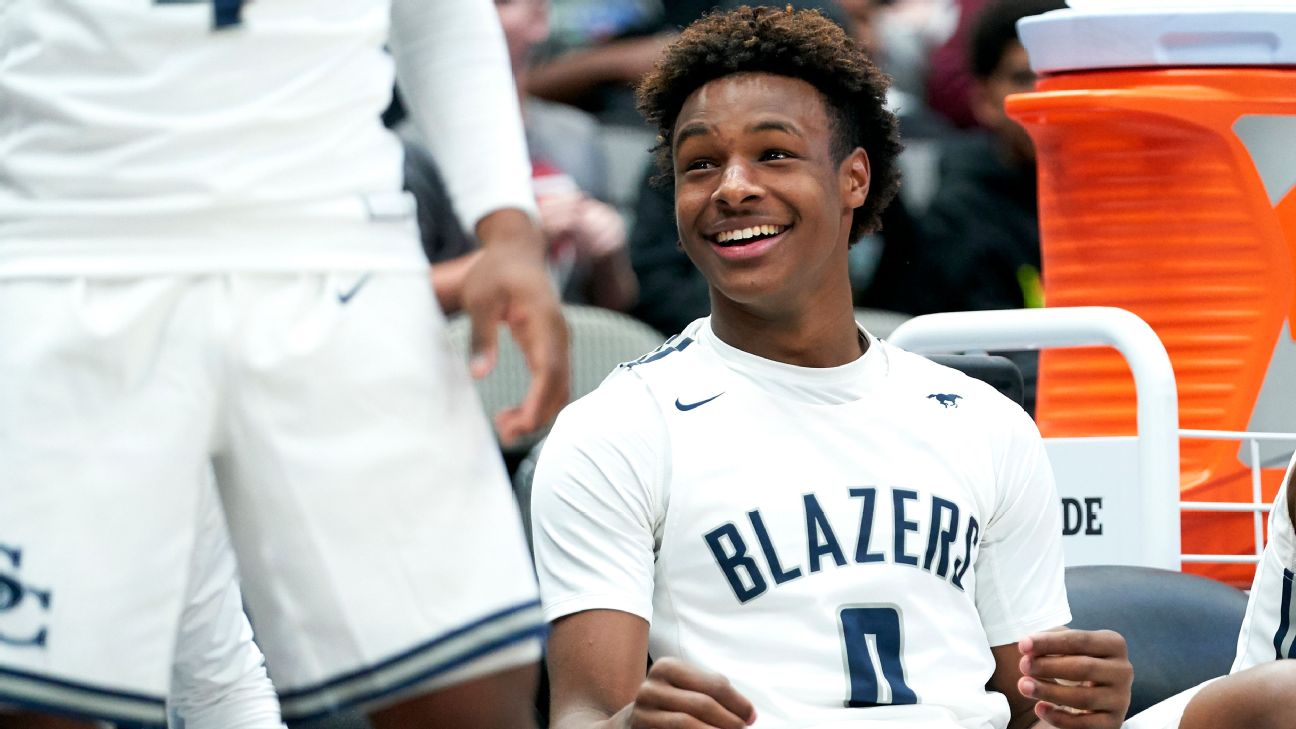 "It's him!" a young man sitting courtside said when he saw him. "It's LeBron James' son!"

The energized crowd of 12,000 filled an NBA venue on a holiday weekend to see a prince, seeking the signs of future excellence that are supposed to come with his lineage. A dunk. A crazy block. A no-look pass. Anything that proved his connection to perhaps the greatest player in the history of the sport, a four-time NBA MVP who still dominates the league at age 34.

Instead, the crowd witnessed an understandably shaky performance by 15-year-old Bronny James, a high school freshman playing in an NBA arena for the first time in his career as part of one of America's best varsity rosters.

With 6:08 to play in the first quarter Saturday, Bronny checked into Sierra Canyon (California) High School's 66-63 win against Duncanville (Texas) in the Thanksgiving Hoopfest at American Airlines Center.

Against Duncanville, the defending 6A state champion in Texas, Bronny showed an inexperience that comes with his age. He was beaten off the dribble by faster, older guards. He lacked the strength to tussle for loose balls against more physically mature college prospects. He committed back-to-back turnovers as the pressure picked up in the second half. He couldn't find a rhythm from the 3-point line. And when the game got tight, Bronny sat on the bench. He earnestly tried to impact the game but finished with two points.

But amid the literal and figurative noise, the more fascinating scene was watching the teenager ignore everything that surrounded him. Bronny never looked up at the crowd, one that included a who's who of interested bystanders: scouts and coaches, such as Texas Tech's Chris Beard; rapper Yella Beezy and his young son, wearing matching diamond necklaces in the front row; Dwyane Wade, whose son Zaire also plays for Sierra Canyon, shouting encouragement from his courtside seat as a DJ poked fun at middle-aged men who danced to tracks from DaBaby, Migos and City Girls. It felt like a Dallas nightclub came to life at a high school basketball game.

But James didn't seem affected by them or the thousands of other eyeballs locked onto his every move. He just played basketball. He clapped loudly after big plays. He encouraged his teammates to shoot when they had space on the perimeter. He held back Amari Bailey, Sierra Canyon's top-10 sophomore, when it appeared Bailey might start a fight.

James might be a regular teenager. The scrutiny that surrounds him, however, is without precedent. It's not an exaggeration to say we've never seen anything like the hype surrounding LeBron James' son at this stage of a player's high school career -- even his famous father's. As a sophomore at St. Vincent-St. Mary High School in Akron, Ohio, the older James was a USA Today first-team All-American. He earned all-state honors as a wide receiver that year too. There was attention, including a famous Sports Illustrated cover, but nothing like the scene that followed the younger James to Dallas.

Thanksgiving Hoopfest organizer Glenn Smith, a former U.S. Air Force captain and local attorney, said he moved the prep hoops extravaganza from a local high school to the home of the Dallas Mavericks two weeks ago, after tickets sold out in 48 minutes. He said officials from American Airlines Center asked him "what it would take to get this event," and the parties moved quickly to accommodate the demand. Some of the floor seats sold for more than $200.

Wherever James walked, a 6-foot-3, 300-pound rock of a human being wearing an earpiece followed. His name is Sosa. He's friendly with familiar faces but stoic when he encounters strangers or potential threats to the safety of the most recognizable non-NBA basketball player in the country.

"We needed someone who could move some weight around if we needed him to," a Sierra Canyon source said of Sosa's presence with the team, an unprecedented move for the school and likely for all of high school basketball.

"At first, I was like, 'Damn, we got security?'" said Frank, James' teammate and another top-100 player. "It's a lot of fun, really. All the attention, it's a good experience. Nobody else gets to experience this in the whole country."

The crowd cheered every time James touched the ball, a strange circumstance in and of itself given that he plays for Sierra Canyon, Marvel's Avengers of high school basketball. In addition to Bailey, Frank and Wade, there's B.J. Boston (No. 9 in the 2020 class, headed to Kentucky) and Ziaire Williams (No. 5 in the 2020 class), both regarded as elite talents. Right now, James comes off the bench in this lineup.

Duncanville's players relished the challenge of playing against the son of LeBron James. Guard Juan Reyna, a midlevel Division I prospect, demanded the ball before splashing back-to-back 3-pointers over Bronny.

While you can't make any grand assessments off one performance by a 15-year-old playing against young men headed to college campuses in a few months, one thing was clear on Saturday night: Bronny James is a freshman who should be allowed to grow at his own pace and not the one preferred by those who want him to live up to the impossible task of becoming his father's NBA heir.

"As an eighth-grader, [Bronny] was more influential versus his peers [than he is this season]," said Paul Biancardi, ESPN's national recruiting director who has watched James multiple times. "To be successful at the varsity level, it takes time and patience. It's a learning curve to adjust to the physicality of competing against older players, the pace and speed of the game. And Bronny has the pressure of being the son whose father is an iconic figure in the game. I like his approach -- he is not rushing the process."

Whether the process will lead to college basketball remains an open question. Likely, changes to the NBA's age-limit restrictions could position James to skip college and turn pro after his projected senior year of 2023 -- if he's a pro prospect by then. His father, a frequent and outspoken critic of the NCAA, has expressed a public desire to be playing in the NBA when his son gets there (if his son gets there).

The road from here to there will be long, and the spotlight figures to remain white-hot for a 15-year-old who has attracted 3.6 million Instagram followers ... yet has posted on the platform just 16 times.

Saturday's experience ultimately resulted in Bronny James dancing with his teammates following a win. He looked happy standing in a circle with them as they celebrated their victory, hopped around together, locked arm in arm, enjoying the moment. That's when the most obvious comparison to his father at this stage in their respective careers materialized: They both love the game, and it shows. Finding his place within the game, meanwhile, will be an ongoing and highly visible trial.

"I just tell him to keep his head, continue to work and to be himself," Boston said. "Don't try to live up to his dad and the expectations. Be yourself. And you'll be good."