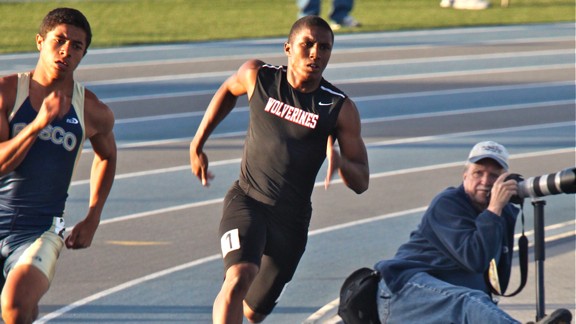 SOUZA, ROBINSON SHINE BRIGHTEST AMONG CLASS OF 2015
By Rich Gonzalez
Editor, ESPNHS/DyeStatCal
(JULY 6, 2012) -- With the official CIF season now complete and few select
Junior Olympics competitions being the only meets still on the calendar, it's time to
start taking a look back on the recently concluded 2012 outdoor track and field
season and to recognize the top performers across the state in each grade class.
First up: The ESPNHS/DyeStatCal Freshmen Boys All-State Team. 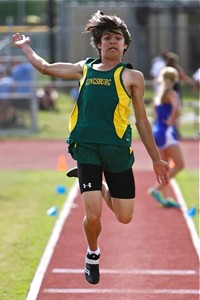 Kingsburg's Joey Souza (at left, photo by Johnie
Thomsen, Hartford Sentinel) arrived on the prep scene
with solid junior high school credentials, but quickly
made an impact at the next level in January of 2012
by winning the long jump competition at the California
State Indoor Championships with a fine leap of
22-04.75. His sprinting talentsbecame more
apparent outdoors, where he missed qualifying
for the state meet by just one place as he placed
fourth in the 100-meter dash at the Central Section
Championships (top three placers advance to state
from the Central Section) with a wind-legal time on
10.89, the year's fastest performance by a frosh.
While Souza closed his first high school season with
a flourish, he was consistent throughout, being one
of two ninth graders to dip under 11.30 in wind-legal
conditions on four separate occasions. Souza also
had outdoor bests of 22.50 for the 200 and 22-07.25
for the long jump, emerging as the only freshman to
make the All-State listing in three different events!
While it is rare when a freshman can make a clear
and immediate impact on the varsity level, it is rarer
yet when a ninth grader can prosper in one of the
toughest leagues in the nation. Harvard-Westlake's
Garrett Robinson (top of page, photo courtesy of Tim Sharpe) did just that, not
only holding his own against the Mission League's best, but actually winning the
400-meter dash title on the varsity level with a stellar 49.07 clocking at the
league finals meet. Two weeks later, Robinson threw down a lifetime-best
performance at the CIF-SS Division III Finals, placing fifth in 48.75. Robinson
also ranked second in the state for his class in the 200-meter dash, owning a
wind-legal best of 22.41. 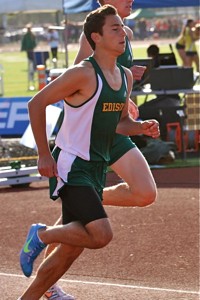 Unlike the entry limitations which freshmen
sprinters and field eventers might encounter at
invitationals (especially on the varsity level), more
liberal field sizes in the distance events often
allows for ample opportunity for the multi-lappers to
shine and develop in their first year of high school.
Huntington Beach Edison's Cooper Kossick (photo
at right, courtesy of Brian Brierly) took full
advantage of those opportunities to record the
fastest time in the state in the 1600-meter run,
4:26.86 at the Distance Meet of Champions. Two weeks
later, Kossick then posted the fastest mile in the
state by a frosh, purring to a 4:28.92 performance
in the Rising Stars Mile at the Arcadia Invitational.
On six occasions, Kossick bettered 4:30 for either
the mile or the 1600 and also had a best of 1:59.73
(#4 in the state) for the 800-meter run.
Saratoga's Steven Sum was riding a hot groove by
late season, dipping under 9:40 for 3200 meters on
four occasions, including a frosh state-leading
9:26.45 to place fifth at the Central Coast Section
Finals. At 800 meters, Vista Del Lago's Jeremiah Bias
clearly was the class of his class, recording the
three fastest times of the year in the two lapper.
His seasonal best of 1:56.38 came at the Inland
Empire Championships.
As is very often the case, few freshmen are able to make a real dent on the
ultra-deep annual state lists in the technique-oriented events, which are the
hurdles and the field events. It is usually later in their prep careers that
athletes effectively latch onto the broader learning curve that is vital in these
trickier events. Even so, some ninth graders were still able to shine.
The state's top weight man indeed was Mater Dei's Malik McMorris, whose heave
of 52-06.75 at the Southern Section Division III Finals led the state. His best
mark was nearly three feet further than any other frosh in the state. Two additional
stellar frosh field events marks statewide were posted by Summit's Khalifah Rosser
in the triple jump and Clovis West's Trevor Groom in the pole vault. Rosser bounded
more than a foot further than the rest of his peers this year when he stretched to
46-01.75 in the Southern Section Division 2 Finals and Groom was a full 15 inches higher
than any other frosh in the state when he cleared 14-00.00 at the early-season
Clovis East Invitational. Groom is the grandson of famed pole vault coaching
mentor Bob Fraley.