LOUISVILLE, Ky. -- In the barn of the favorite Classic Empire, trainer Mark Casse and his brother sat in the small office, hiding from the cold rain. They sipped coffee. The sun had finally started to rise, revealing gunmetal skies over Churchill Downs. All around the backside, security guards huddled beneath the eaves of the barns; the exercise riders and hot walkers hunched over in coats and ponchos; the dirt turning to mud; steam rising off the backs of the horses. Water dripped from the bills of baseball hats. The crews talked quietly, mostly in Spanish, and the only real noise came from the hooves on the nearby track and the rain hitting the barns. Vets and blacksmiths made their rounds. Turf writers drank free coffee and ate doughnuts, chasing away hangovers and roadside motel beds. 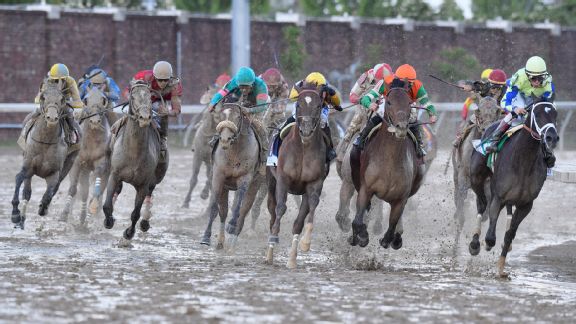 It was near the end of Friday morning's training session -- Oaks Day in Kentucky -- and the horses were being washed and wrapped and walked and fed, the same as yesterday, the same as tomorrow. Nothing ever changes in the barns. The hidden rhythms of the backside of a track are among the most seductive and idiosyncratic parts of the traveling circus of horse racing. The little cantina along the rail serves tacos and burritos, along with burgers and slick meat sandwiches. About 1,000 people work in the barns, maybe half of them living for free in a dormitory or sleeping in the barns with the horses. Around 80 percent are Hispanic, many from the same part of Guatemala, according to Sherry Stanley, who runs the Backside Learning Center.

"It's like a little Central American village when you come back here," she says.

The village is bordered to the east and south by Longfield Avenue and South Fourth Street, and to the north and west by the racetrack and its parking lots. The area is shaped like an upside-down triangle, and the green-roofed bars are lined up in neat rows, like containers on the deck of a big ship.

The streets surrounding the track are an easy place to score heroin, and the lonely lifestyle so far away from home leads to alcohol and drug problems. There have been shocking acts of violence; 10 years ago, a local man killed a 4-year-old boy from Guatemala and threw his body in a garbage truck across from the track. Five years ago, a groom was beaten to death and left in a barn the night of the Derby. His murder remains unsolved.

A collection of horse racing groups raise money to try to catch these problems before they escalate. The backside has its own counseling program that runs Alcoholics Anonymous and Narcotics Anonymous programs. A medical clinic offers free care. There's a backside chapel with a free dinner and service on Monday nights. The chaplains run a food pantry and a makeshift thrift store. A nearby church lets the Backside Learning Center use space for after-school programs -- kids aren't allowed on the backside, so families use this off-site facility -- and the people who work at the center like to organize field trips, taking kids to the zoo or a local maple syrup festival.

Most days during racing season, people hang outside Gate 5, hoping a trainer needs work. For those who have jobs, their whole world revolves around the backside. Families live in apartments nearby, the mothers dropping off sleeping kids at a baby sitter's house at 4 a.m. to make it to the track in time for the day to begin, hours before a hint of daylight. One woman named Maria works with the horses in the morning and then does a 2-10 p.m. shift at UPS. That's a common story.

The single workers on the backside rarely leave, sleeping and eating near the horses. There's a rec center with pool tables and betting windows, old-school company town stuff, where workers can get payday brave. Otherwise, folks walk to a diner between Gate 5 and the Louisville football stadium, and they shop at the nearby Kroger, and wire money back home. A lot of money flows south from that particular Kroger.

The people drawn to this world love the outdoors. Many come from farming or rural backgrounds, traveling north for the racing season, following trainers and the weather from track to track, carrying around pictures of their villages to remind them of home.

"For the most part, the vast majority are extremely hard working people who are busting their butts to support their family back home," Stanley says, sitting in the main room of the Learning Center. "They travel around with the horses. They send the money home and live off of nothing."

Stanley worked in Central America with the Peace Corps and then got a job helping refugees. A few years ago, she took over running the Backside Learning Center, which has many specific programs, from music lessons to English classes at night. All their outreach is connected by what she sees as their overarching mission: creating a community.

On the wall, there's a drawing one boy did for them of Leo Messi.

His name is Augustin.

He wants to be a jockey or a lawyer when he grows up.

This week, The Associated Press ran a smart story about the fear rising in the Churchill barns about being deported, or being denied the visas that have allowed them to come to Kentucky for years. Stanley said she's gotten calls from lots of reporters, too, and she doesn't want to say anything that might draw Immigration and Customs Enforcement's attention. The newly hired Spanish-speaking chaplain, Joseph del Rosario, said there are whispers floating around the backside: a vague sense that a cloud is rolling in.

Justin Casse stood against the wall of his brother's barn Friday morning, watching the horses being led around in a slow circle. He joked about how barn life can push out any other kind of life; people will ask if he read or saw something in the news, some terrorist attack or big political scandal, and he'll kind of laugh and explain that he had a horse in the second race and nothing else exists. The bubble is even more consuming and inescapable for the village that springs up when the racing starts here in the spring. All trainers can tell stories of incredible devotion shown to million-dollar horses by folks making $400 a week. Del Rosario, the chaplain, sees it every day, but he also sees lonely people, barely making it. That's what draws him to this ministry.

The other day, a guy came into the office at the chapel and asked if they'd been to visit a backside worker with stage 4 colon cancer. A pastor had tried to find him at a local hospital, but he wasn't there. The man wants them to keep looking, which they promise to do.

Del Rosario went outside and made his big lap through the barns. His father came here from Peru and so he understands what his immigrant parishioners are going through. Past the press center and the rec room, he stops to speak to people, in both English and Spanish.

Outside the cantina, he sees a worker on the steps.

"How are you?" del Rosario asks.

"Tired but I'm here," the man replied, ready to get past the mania of the Derby.

"Get some coffee?" del Rosario asks. The man smiles.