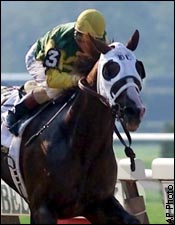 Commendable, Lukas' 18-1 longshot, won the Belmont Stakes by 1 1/2 lengths.
Commendable effort
Commendable won the 132nd Belmont Stakes in a time of 2:31, with Aptitude taking second and Unshaded finishing third. The chestnut colt fought with Hugh Hefner from the start and took command in the final half-mile. "We had a wonderful trip," said winning jockey Pat Day. Commendable, the 17th-place finisher at the Derby, had a shoe problem before the race. His victory gave D. Wayne Lukas his fourth Belmont win and the Lewis family their first. It was the first time in 30 years that the Belmont ran without the Derby and Preakness winners. 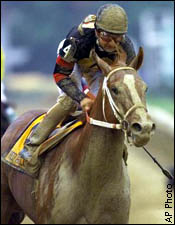 Jockey Jerry Bailey and Red Bullet win in an upset at the Preakness Stakes.
Red Bullet fires
Maybe Fusaichi Pegasus isn't the real deal after all. In a spectacular upset, Red Bullet pulled away from the Derby winner at the final turn to win the 125th Preakness Stakes by three lengths with a time of 1:56 on Saturday. "Turning for home, I saw my horse make the move I expected him to make," said winning trainer Joe Orseno. FuPeg trainer Neil Drysdale blamed the wet track for the favorite's runner-up finish. Todd Pletcher's Impeachment once again finished third. The horses now move on to the Belmont Stakes on June 10. 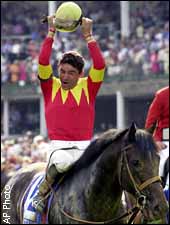 Kent Desormeaux celebrates his second Derby win, which came aboard Fusaichi Pegasus.
Favored Fusaichi wins
For the first time since Spectacular Bid in 1979, the favorite won the Kentucky Derby. But Fusaichi Pegasus not only beat Aptitude and the rest of the field, he made them look slow down the stretch. The Neil Drysdale-trained colt won with a time of 2:01.12 before a crowd of 153,204. The Derby winner now looks forward to a trip to the Preakness Stakes on May 20. Rookie trainer Todd Pletcher also had reason to celebrate, as two of his record four entries finished in the top 5. Impeachment was the show horse and More Than Ready finished in fourth.