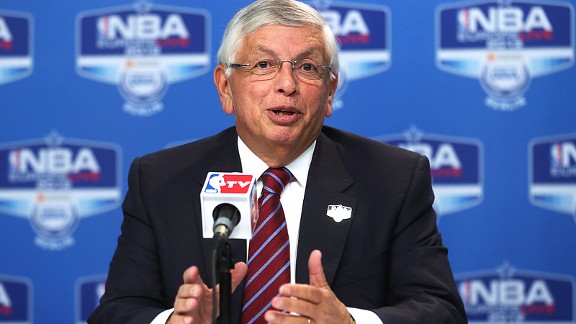 Joern Pollex/Getty ImagesIf gambling is so harmful, as David Stern claims, why has the NBA grown in the wake of Tim Donaghy?

There is something for everyone in U.S. District Judge Michael Shipp's 45-page ruling against New Jersey in its fight for legalized sports betting in the state, a decision delivered deep into the night of Feb. 28.

If you believe, like the citizens of New Jersey, that the 1993 Professional Amateur Sports Protection Act federal ban on sports betting is unconstitutional, you can take solace in this: "Judicial intervention is generally unwarranted no matter how unwise a court considers a policy decision of the legislative branch," Shipp wrote.

Aha, did you see that? Buried in the absolute rejection? The fine jurist hints -- in a very sly, judicial way -- that PASPA is "unwise." That is a small crumb that Garden State lawyers can bake into something larger as they plot their appeal, which is happening as I type this.

However, the four major sports leagues and the NCAA, which argued against overturning PASPA in a Feb. 14 hearing, are more likely to be cheering this conclusion (in addition to, you know, the actual ruling in their favor): "PASPA advances the legitimate purpose of stopping the spread of legalized sports gambling and of protecting the integrity of athletic competition."

And there it is: "integrity of competition."

Two issues are at the heart of this case: From the New Jersey side is the fact that four states -- Nevada, Montana, Oregon and Delaware -- are able to offer legalized sports betting because they did so before PASPA was enacted. And in the generation since PASPA was passed, betting of all kinds has become commonplace in virtually every state in the country. From Native American reservations to riverboats, from land-based casinos to racetracks loaded with slot machines, gambling is a depended-upon cure-all for pols looking to raise revenue. The result has been many-fold: Billions injected into local economies in the form of jobs, construction projects and taxes (and, many would argue, an increase in gambling addiction). It's also brought gambling to the front door of nearly everyone in the United States.

For people on the East Coast who are within driving distance of New Jersey, there is nothing special about a trip to Atlantic City anymore. In fact, according to UNLV's Center for Gaming Research, it was New Jersey's neighbor, Pennsylvania, that led the nation in gaming tax revenue last year, with $1.4 billion, nearly $300 million more than Nevada.

New Jersey governor Chris Christie, presiding over crumbling Atlantic City boardwalks, bankrupt resorts and witnessing gambling competition encroaching from states on all sides, sees expanded gaming as (one of) his saviors. This past week, he signed a bill legalizing Internet gambling, believing it will fill New Jersey's coffers with $250 million per year (although others in the state believe the number is closer to $40 million). He also desperately wants sports betting to be on the menu.

That is one form of wagering that has remained the third rail of gaming. It has blown up online, its profile rising along with the growth of the Internet the past 15 years. But as the black market numbers increased (and they are truly incalculable; the most recent government study of sports betting was conducted in the relatively pre-Internet days of 1999 and estimated the market could be as high as $380 billion), the opposition from the major sports leagues has become even stronger. In a deposition prior to the start of the recent federal case, NFL commissioner Roger Goodell said that he viewed sports betting as the single greatest threat to the integrity of the game. More than Bountygate. More than steroids.

Goodell's NBA counterpart, David Stern, has always been more progressive about gambling than Goodell. Before the news broke in the summer of 2007 that former NBA ref Tim Donaghy admitted working with gamblers, the NBA hosted its All-Star weekend in Las Vegas. And in recent years, Stern has intimated that he can foresee the day when sports betting becomes legal. But that doesn't mean he believes it's right. 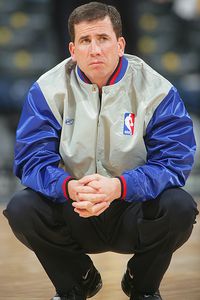 Rocky Widner/NBAE/Getty ImagesDespite Tim Donaghy's stain, the NBA has grown in the aftermath of its gambling scandal.

"The one thing I am certain of is that New Jersey has no idea what it's doing and doesn't care, because all it's interested in is making a buck or two," Stern said in his deposition back in December.

Since the Donaghy affair, the NBA has worked hard to make the point that its game would be irreparably harmed by legalized sports betting, which is the argument all the leagues make against it. In preliminary stages of this case, it cited a 2009 NBA Integrity study it conducted showing 33 percent of fans responded that game-fixing and gambling were a problem for the leagues. (The study showed the same to be true for 15 percent of NFL fans).

While Shipp made the potential for irreparable harm a centerpiece of his decision to rule in favor of the leagues, the legal logic isn't necessarily matched by numbers. In mid-February, Nick Burkhart and Dylan Welsh, two Saint Louis University law students, uploaded a paper called "The Legalization of Sports Gambling: An Irreparable Harm or the Beginning of Unprecedented Growth?" onto the website SSRN.com (SSRN stands for social science research network). The site serves as a collective for people to get critiques on papers in various stages of development.

Burkhart and Welsh, co-presidents of their school's sports and entertainment law association, have been following the case. When they reviewed the material submitted by the leagues following the deposition, including that NBA integrity study, they did their best Julia Roberts impersonation and began crafting their own Pelican Brief, only with a much less sexy title.

The point is, beginning with 2007, when the Donaghy scandal broke and the legitimacy of the league was most in question, the duo looked at several different financial factors to truly gauge the damage. One was average attendance, which was at a high of 17,757 in 2007, post-Donaghy scandal, and has dropped by about 600 fans per game in the years since. A drop-off, for sure, but not a death knell for the league. Another was franchise value, which Burkhart and Welsh used Forbes estimates to show had increased by 44 percent since 2007, including a 30 percent jump in the past year. Finally, to refute the league's claims of irreparable harm, they used TV ratings and the value of rights packages. Just as the Donaghy news was breaking, the NBA signed new TV deals with TNT as well as ESPN/ABC for a little more than $900M a year. Forbes estimates that, when those rights are up in a couple of years, the number will crack the $1B threshold. And that is largely because ratings for the NBA have exploded since 2007.

I'm being flip, and I mean to be. That's because the argument the leagues make about irreparable harm is, in its construction, a straw man. NFL revenues could be as high as $10 billion this year. In Nevada, sports betting revenues are as high as they have ever been, and it is football that accounts for more than 40 percent of the action (the state does not distinguish between NFL and college games). This past Super Bowl, the handle was the highest in history. And, as the Pelican Boys proved in their still-evolving paper, the NBA has grown exponentially in the years after a scandal Stern called "the worst thing that could happen to a professional sports league."

For now, the leagues can rest a little easier. But this case will move forward. On Friday morning Ray Lesniak, a New Jersey state senator who originally filed the lawsuit, sent an email blast that read, "We will appeal this patently misinterpretation of the U.S. Constitution by Judge Shipp, but that means we'll have to wait another year to get justice for the residents of New Jersey."

Legal or not, they still won't have a hard time getting down a bet.

Chad Millman, Editor in Chief of ESPN The Magazine, joined The Mag as an associate editor in 1998. A year later he left to write "The Odds" -- about a trio of Vegas bookmakers and wiseguys -- and to find riches working for an Internet company. He made tens of dollars on "The Odds," the web biz tanked and he returned to The Mag. He also worked at Sports Illustrated and wrote some other books, including "Iceman" with Chuck Liddell, "Invincible" with Vince Papale, "Pickup Artists" with Lars Anderson, and "The Detonators." His most recent books are the national bestseller "The Ones Who Hit the Hardest," about the blood feud between the 70s Steelers and Cowboys, written with Shawn Coyne, and the New York Times bestseller "They Call Me Baba Booey", with Gary Dell'Abate.

Millman's daily blog explores the culture of sports gambling; on Mondays and Fridays in the fall, he investigates trends in point spreads related to professional football.