The Class of 2013 is in the stretch run. With just 50 days until national signing day, there are plenty of developments and questions in the lead-up to Feb. 5. From top uncommitted players to class rankings predictions, this is everything you'll need to know.

50. Who is next at Texas, and when? The choice as new Longhorns coach will be key for future classes, but the timing of the hire is also important as there are quite a few commitments targeted by other teams that are now hanging by a thread with each passing day -- dead period or not.

49. Will Maryland close with a bang? This one is simple: keep No. 15 Jalen Tabor (Washington, D.C./Friendship Collegiate Academy) and No. 26 Damian Prince (Forestville, Md./Bishop McNamara) home and it's a big bang.

48. How will USC close? It's paramount that Steve Sarkisian closes strong from a perception standpoint. Five-star Adoree' Jackson (Gardena, Calif./Junipero Serra) is at the top of the list when it comes to perception. There are a number of prospects from Southern California who would be headline-makers for the Trojans down the stretch.

46. Ole Miss commit Markell Pack (Purvis, Miss./Purvis): The No. 92-ranked Pack flipped from Florida State to the Rebels and is a huge win for Hugh Freeze and staff. Pack is a big-time playmaker. Chalk up another wide receiver with size for the Rebels.

45. Boston College commit Jonathan Hilliman (Jersey City, N.J./Saint Peter's Prep): The No. 285-ranked Hilliman flipped from Rutgers to the Eagles and could be a near-perfect replacement for Heisman Trophy finalist Andre Williams.

44. Auburn commits Kalvaraz Bessent (Kingsland, Ga./Camden County) and Stephen Roberts (Auburn, Ala./Auburn): Auburn flipped No. 42-ranked Bessent and No. 69 overall Roberts from rival Alabama. In a defense and league that demand size and the ability to tackle at corner, these were two huge wins for the Tigers -- and they just happened to be against their rival.

Welcome to the recruiting party

43. Frank Iheanacho (Houston/Westside): The 6-foot-7, 220-pound wide receiver is back on the gridiron for the first time in two years and is now a national recruit with offers from Texas A&M, Arkansas, LSU, Oregon and Arkansas, among others.

42. Thomas Holley (Brooklyn, N.Y./Lincoln): Like Iheanacho, the No. 87-ranked Holley was focused on basketball at one time. He has made huge strides in the past couple of seasons to become a top national recruit. Penn State will get to develop the athletic defensive tackle prospect.

41. Mike Rogers (Smyrna, Ga./Campbell): The UCF commit burst onto the scene as a senior after moving to the Atlanta area last year and now has interest and offers from the likes of Ohio State, Vanderbilt, Arkansas, Georgia and a growing list of others.

40. NC State commit Kentavius Street (Greenville, N.C./J.H. Rose): The commitment of No. 32 Street to the Wolfpack is a huge in-state perception win for Dave Doeren and staff. Ole Miss, Florida State and Miami were the competition for the athletic defensive lineman.

39. Baylor commit Davion Hall (Texarkana, Texas/Liberty-Eylau): The No. 45-ranked Hall was a "soft" commitment to the Bears for quite a while as Texas A&M and Alabama made runs at the versatile prospect. Keeping Hall in the fold is another signal that the Bears are here to stay in the Texas recruiting landscape.

37. Missouri commit Andy Bauer (St. Louis/De Smet Jesuit): The No. 82-ranked Bauer was once a Missouri commit, flipped to Ole Miss and returned to the home-state school during the season. This was the best home win for Gary Pinkel and staff, especially considering Bauer was committed to an SEC West team riding a wave of recruiting momentum.

36. USC commit Viane Talamaivao (Corona, Calif./Centennial): No. 105-ranked Talamaivao flipped from Alabama to USC in what is considered a huge recruiting win for the area of Southern California and the Trojans.

35. Minnesota commit Jeff Jones (Minneapolis/Washburn): To say the Gophers keeping the No. 181-ranked Jones committed is huge would be an understatement. The Gophers are on the rise, and losing Jones to another Big Ten school would have been a blow for Minnesota.

34. UCLA commit Jaleel Wadood (Bellflower, Calif./Saint John Bosco): No. 297 overall Wadood flipped from California to UCLA on Dec. 10 and is another key win for the Bruins as they make a play to keep the best in Southern California home.

33. No. 1 Leonard Fournette (New Orleans/Saint Augustine): This one has been an LSU-Alabama showdown, and Fournette will announce his decision during the Under Armour All-America Game on Jan. 2 (ESPN, 4 p.m. ET). 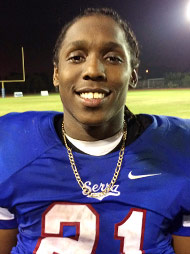 32. No. 7 Adoree' Jackson (Gardena, Calif./Junipero Serra): Jackson's recruitment could go in a number of directions with USC, Florida State, Oklahoma, LSU, Florida, Tennessee and UCLA fighting for the elite athlete.

31. No. 8 Speedy Noil (New Orleans/Edna Karr): LSU and Texas A&M are battling for the electric playmaker with a decision scheduled during the Under Armour All-America Game.

30. No. 9 Marlon Humphrey (Hoover, Ala./Hoover): Humphrey will choose between Alabama and Florida State, with the Crimson Tide being very difficult to pick against.

29. No. 11 Tony Brown (Beaumont, Texas/Ozen): The pound-for-pound best athlete in the class has LSU, Alabama, Texas and Texas A&M battling for his services. Many have had LSU in the lead since his sister inked a track scholarship with the Tigers last year. The Crimson Tide are in the spoiler position. Brown will also announce at the Under Armour All-America Game.

28. No. 13 Lorenzo Carter (Norcross, Ga./Norcross): Georgia, Florida and Alabama are battling for the uber-athletic end prospect. Carter visited Florida officially Sept. 21, and the Gators have been trending along with the Bulldogs.

27. Miami commit Darrion Owens (Orange Park, Fla./Oakleaf): The No. 287-ranked Owens continues to fill out physically and showed signs of being a pass-rushing outside linebacker this season. Being an impact freshman for the Hurricanes is not out of the question.

26. Louisville commit Poona Ford (Hilton Head, S.C./Hilton Head): No. 271 overall Ford is physically advanced and plays with naturally low pad level. That combination gives him the chance to be a surprise impact freshman next year.

25. Clemson commit Korie Rogers (Buford, Ga./Buford): While No. 192-ranked Rogers needs to develop physically, he is very well coached and has sideline-to-sideline and play-in-space ability. He is prepared with the athletic ability to transition quickly.

24. West Virginia commit Lamar Parker (Miami/Booker T. Washington): No. 229-ranked Parker plays with a Football Bowl Subdivision-level quarterback at the high school level and is gifted after the catch.

23. Virginia Tech commit Ricky Walker (Hampton, Va./Bethel): The No. 299-ranked Walker has the quickness and pad level to come in and hit the field running. He can cause disruption in a role from day one.

22. Rashaan Evans (Auburn, Ala./Auburn): The No. 84-ranked Evans is considered one the hometown Tigers have to win, and they will have to fight off Georgia and Alabama to get it done.

21. Derrell Scott (Havelock, N.C./Havelock): The onetime lock to head to South Carolina now has Tennessee very much in the picture in this SEC East showdown.

20. Wesley Green (Lithonia, Ga./Martin Luther King): The No. 120-ranked Green is a onetime South Carolina commit who is now the subject of a battle between Georgia and the Gamecocks. The Bulldogs have been trending with the cover corner, but the Gamecocks are not going lightly.

19. Brian Wallace (St. Louis/Christian Brothers College): The No. 145-ranked Wallace would be another big win for in-state Missouri, but Alabama poses a major threat. Iowa and Arkansas also received visits, but this one is looking like the Tigers and Crimson Tide in an SEC battle.

18. Bishard Baker (Bellevue, Wa./Bellevue): No. 147 Baker is considering UCLA, Oregon, USC and Washington. While all four schools are in the race, the Ducks and Bruins continue to trend.

17. Dontavius Russell (Carrollton, Ga./Carrollton): No. 201 Russell backed off his Georgia pledge recently and is now considered a good bet to end up at Auburn.

16. Matt Elam (Elizabethtown, Ky./John Hardin): The 6-6, 350-pound Elam is a battle between Alabama and in-state Kentucky with Notre Dame attempting to play spoiler. A huge perception recruit for the Wildcats.

14. Solomon Thomas (Coppell, Texas/Coppell): The No. 31-ranked prospect is tough to get a true feel for. Stanford is a decent bet, but Ohio State has made a move. The Texas coaching search could also have an impact.

12. WR Jamil Kamara (Virginia Beach, Va./Bishop Sullivan Catholic) -- @JKamara1
Kamara is not afraid to drop an opinion via social media on teams he is considering.

11. Ole Miss commit C.J. Hampton (Meridian, Miss./Meridian): It appears this isn't an if but a when with Friday looking like the day the No. 134-ranked Hampton will flip from Ole Miss to Alabama, Arkansas or Florida State with the Crimson Tide considered the favorite.

10. Florida commit Dalvin Cook(Miami/Central): The Gators commit and No. 20-ranked prospect has officially visited Texas on Sept. 14, Florida State on Oct. 25, Arkansas on Nov. 2 and Miami on Dec. 6. At this time, the Seminoles have the momentum over the Hurricanes and Gators.

9. Miami commit Chad Thomas (Miami/Booker T. Washington): The No. 70-ranked Thomas remains a commitment for the Hurricanes, but Al Golden and staff will have to fight off December and January runs by Florida State and Alabama to ink the talented end.

8. Florida State commit Dexter Wideman (Saluda, S.C./Saluda): No. 178-ranked Wideman remains committed to the Seminoles but will visit South Carolina on Jan. 17, and many considered the Gamecocks the prohibitive favorite.

7. Alabama commit Zach Whitley Jr. (Houston/North Shore): No. 189-ranked Whitley has been a Crimson Tide pledge since May but made an official visit to UCLA on Dec. 6. This remains one to keep an eye on.

6. Florida commit J.C. Jackson (Immokalee, Fla./Immokalee): The onetime Florida State commit and current Florida commit visited Miami last weekend. The versatile athlete could be the first in recent memory to commit to the big three in the same cycle.

4. Florida State: The Seminoles will close well, but will it be enough to finish top two?

3. Tennessee: The Vols have a huge class that includes 11 ESPN 300 members.

2. LSU: The Tigers will close well but will not make the clean sweep required to challenge for No. 1.

1. Alabama: Go ahead and pencil in the Crimson Tide for the best class in the country -- again. The Crimson Tide have 17 ESPN 300 commits, including two five-star prospects in No. 3-ranked Cameron Robinson (Monroe, La./West Monroe) and No. 6 Da'Shawn Hand (Woodbridge, Va./Woodbridge) with many more remaining in play.