The Great Depression was a severe worldwide economic depression in the decade preceding World War II. Starting in 1929 and lasting through the late 1930's and early 1940's, it had a devastating effect in the United States. Farming and rural areas suffered as crop prices fell by approximately 60 percent. 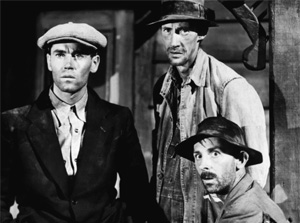 Henry Fonda (left) in The Grapes of Wrath

In 1940, one of the greatest films of all time, The Grapes of Wrath was released. Set during the Great Depression, it focused on a poor family of sharecroppers, the Joads, who were driven from their Oklahoma home by drought, economic hardship and changes in the agriculture industry. In a nearly hopeless situation, they set out for California along with thousands of other "Okies" in search of land, jobs and dignity. Directed by John Ford and starring Henry Fonda, the motion picture details the arduous journey across the U.S. as they travel to California in search of work and opportunities. In 1989 it was one of the first 25 films to be selected by the Library of Congress for preservation in the U.S. National Film Registry.

Some 70 years later, we now bear witness to another group of Oklahomans who embarked for California just over a week ago. Unlike the Joads, they did not set out via broken-down jalopy while living outdoors in makeshift campgrounds. Instead, they arrived by charter aircraft, residing in a five-star luxury hotel. They are the Oklahoma City Thunder, who began their NBA opening round playoff series against the Los Angeles Lakers, like the Joads, with a hunger and desire to succeed.

With the series tied at two games apiece, let's take a look at several revealing statistics:

With the series down to a best two out of three, it is now a question of hunger and desire. Which team wants it more -- the defending World Champions, who have yet to demonstrate the passion and hunger of last year's team, or the Oklahoma City Thunder, a team marked by youth, energy, ambition, and a burning desire to succeed despite the odds being stacked against them, much like the Joads some 70 years ago?