LOS ANGELES -- The illness has spread to the West Coast, and UCLA appears to have caught the Florida bug.

The Gators seem to have found a cure for their funk, blasting Kentucky after dropping recent road games at Vandy, LSU and Tennessee. They may just be recovered enough to cruise through the SEC tournament in Atlanta that, for them, kicks off with a Friday quarterfinal against Georgia.

The Bruins aren't feeling so well right now, and their 80-minute bug may have cost them a No. 1 seed when selections are announced Sunday.

Losing to seventh-place Washington on Saturday in Seattle, two days after winning the Pac-10 title outright in a gritty game at Washington State, was understandable. Losing to eighth-seed Cal in the quarterfinals of the Pac-10 tournament Thursday at the Staples Center, where the small pocket of Bears fans was greatly outnumbered, is cause for alarm.

The Bruins' coaching staff wasn't pleased with the 14 turnovers -- seven by point guard Darren Collison. They also lamented UCLA's inability to get critical stops in both regulation and overtime. More than anything, though, the staff is convinced that all the postseason praise heaped on Collison and Arron Afflalo (Pac-10 Player of the Year, first team All-American) went to their heads. Afflalo shot just 1-for-7 from the field, 0-for-5 on 3s. 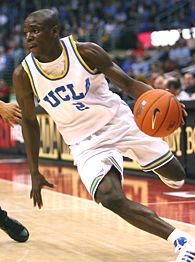 So, now that the Bruins have been "told how good they are," the staff is hoping reality will set in, since their next loss will be their last.

Howland was quick to point out that the Bruins haven't fallen too far, since they did win the league title just a week ago. Still, there needs to be a quick change of attitude, beginning in practice and with their preparation, according to the head coach.

"We are a team that has to play at its peak performance to have a chance to win against anybody, whether it's Sam Houston State or Kentucky," Howland said. "Anybody can beat us on a given day, and we can beat anybody. This just proves there is so much parity in college basketball."

But it also shows how much the mental side of it plays a role in these conference tournaments. UCLA knew it was in the field of 65, likely going to Sacramento next week for the first and second rounds as a No. 1 seed or, at the very worst, a No. 2 seed.

"I don't want to take anything away from Cal, but this was their last game and we played like we had another game, and that's the difference," Collison said.

That's exactly what happened to the Gators in the regular season.

Collison said he takes responsibility for the slow starts in the last two games and, of course, faults no one but himself for the turnovers (Collison also shot 2-of-15 against the Huskies). And he acknowledged that knowing the Bruins were safely atop the bracket does mess with the mind when you've got a desperate team on the other side.

"I don't know what their desire was, but we had an unbelievable desire to win the game," said Cal senior guard Ayinde Ubaka, who equaled a career high with 29 points and made both a floater to send the game into OT and a 3 late in the shot clock to ice the game in the extra session. "We have nothing to lose. They know they're going to be a 1- or a 2-seed. There's a different set of emotion. We lose and we go home.

"There was nothing we really exploited. We just played with them for 40 minutes. They're going to be a No. 1 or No. 2 seed for a reason."

The selection committee protects the Nos. 1-4 seeds (and sometimes the No. 5) in the first two rounds, keeping them as close to home as possible. In going through a mock selection process last month, though, it was made clear to those of us in attendance that the committee doesn't look to set up advantageous situations for possible Elite Eight matchups. They simply don't plan on games that may occur in the tourney's fourth round. That's why UCLA could drop to No. 2 in the West (San Jose), behind a No. 1 like Wisconsin or Kansas or whomever, and the committee wouldn't necessarily worry about the disadvantage to the top seed.

Now the Bruins must resort to scoreboard watching for the rest of the weekend. They are keenly aware that if Wisconsin and Ohio State meet in the final of the Big Ten tournament Sunday, both teams could get No. 1 seeds, as could Kansas (Big 12), Florida (SEC) or North Carolina (ACC).

A No. 1 or No. 2 seed won't matter if the Bruins don't stop feeling sorry for themselves; instead, they must play with passion, purpose and desire, like they did just one week ago in Pullman.

"We've got to regroup and get ready for the tournament," Shipp said. "We've had a lot of mental lapses in the last two games."

More than anything, we have learned, once again, that no team is infallible. Everyone in this year's field can be beaten, and projecting the early-round winners, let alone the Final Four, could be as hard as the seeding process will be for the committee in the next three days.