Subjective analysis can take you a pretty decent way in college basketball. The naked eye of any decent fan or observer of the game can parse through the more than 330 teams in Division I and pick out the upper crust.

That said, when you are talking about the very top of that upper crust -- the teams that could potentially win the national championship -- objective statistical analysis can provide you with some unassailable truths.

The last three national champions were extremely potent offensive teams. The 2004 UConn Huskies had Emeka Okafor and Ben Gordon as the anchors around which Rashad Anderson and Charlie Villanueva revolved. In 2005, North Carolina had four NBA first-round draft picks, including one who came off the bench. Last season's Florida team ultimately could have that many, too -- whenever those same Gators finish trying to defend their crown. All three champs were top-10 teams nationally in terms of adjusted offensive efficiency, with the last two arguably being the best offensive teams in the land in their respective championship seasons.

The slightly dirty secret about those teams, though, is that they also were elite defensive teams. All three also ranked in the nation's top 10 in adjusted defensive efficiency. Recall that North Carolina forced Illinois to shoot 12-for-40 from the arc in the 2005 title game while Florida rode an incredible wave of defensive performance to the title last season, holding its six opponents combined to under 40 percent from the field.

Basically, if you want to win the championship, you have to be great at both ends of the floor.

Now, look at what's unfolding this season. There currently are five teams ranked in the top 15 in both adjusted offensive and defensive efficiency (taking schedule strength and location of games into account), according to kenpom.com. Four of them you can probably guess, as North Carolina, Florida, UCLA and Wisconsin currently are the top four teams in both polls (a notable intersection of subjective and objective analysis). The fifth team, though, proves that sometimes numbers can -- or should? -- lead you to a conclusion different from what most perceive.

It also raises a legitimate question: Why aren't more people talking about Texas A&M as a national title threat?

In the case of the Aggies, a lot of it is reputation. As recently as three seasons ago, in the year before current head coach Billy Gillispie arrived, A&M went 0-16 in Big 12 play. In Gillispie's first two seasons, he was criticized for his team's cream-puff nonconference schedules as he attempted to fix the morale of the program, both for the players and the fans. Two 20-win seasons and an NCAA bid last year have helped fix that. 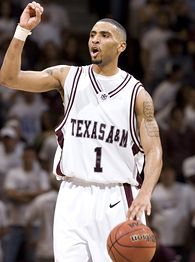 This season, A&M undertook the next stage for a building program, stepping up in nonconference class by venturing to LSU and (essentially) to UCLA. The problem? They lost both games, making it easy for the casual observer to believe the Aggies were no better than the past couple of seasons.

Believing that, though, would be a mistake.

It's worth noting that LSU was the same team that needed a last-second 3 to escape A&M in the second round of last season's NCAA Tournament, so the Tigers knew the Aggies better than almost any other nonconference opponent. Also, anyone who saw the UCLA game should know that A&M's effort would have beaten almost any team in the land. The Aggies shot 49 percent from the field against the staunch Bruins defense and outrebounded them badly, only to be undermined by a minus-8 turnover margin.

That performance, though, kick-started a stretch where A&M won at Auburn by 29 (by comparison, Pitt, the Big East favorite, won there by eight) and beat Winthrop by 20 (the same Eagles team that lost to North Carolina and Wisconsin by a combined 10 points).

Yet, since the Aggies walked off the court in Anaheim as three-point losers to the then-No. 1 Bruins, they've essentially fallen off the buzz map.

"The way college basketball is, with so many people making statements and assumptions about your team, [the reality] is that those games are in early December [when teams are still searching for their identities]," Gillispie said. "We went over there trying to win both of those games, but not a lot of teams have had a good time on those courts. People will say, "Well, you failed those two tests," but a lot of teams would have failed those tests. Let's make sure we give those teams due respect. Those are really good teams. They are fully capable of making the Final Four [this season], and they [both] did last year.

"We have had a lot of hard teams [on the nonconference schedule]. Because we have won games by larger margins, though, people [discount] what you have done."

Any way you cut it, the Aggies have the defensive side of things down. For the traditionalists in the audience, they are the only team in the nation not to have allowed more than 65 points in a game this season. They also rank first in the nation in both 2-point field goal defense and effective field goal percentage defense (which accounts for the impact of 3s). For the more discerning tempo-free crowd, they are allowing a stellar 0.81 points per possession (even adjusted for schedule strength) and they turn teams over a ton, forcing miscues on one out of every four opponent possessions.

The difference this season, though, has come on the offensive side of the ball. While the Aggies may look, according to their coach, "brutal" at times, they have gone from a slightly above-average offensive team last season to one that is -- statistically, anyway -- one of the best in the land this season. This is where the subjective needs to come back in, though, because it's obvious at times that A&M is a two-man show, and if you can contain senior Acie Law IV on the perimeter and/or junior Joseph Jones inside, there isn't enough consistent firepower elsewhere to turn to. This was exposed in the two road losses, but began to remedy itself afterward. 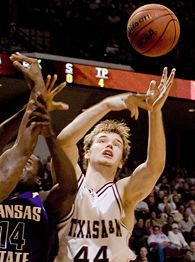 Sophomore Josh Carter ripped off six straight double-figure games after the loss to UCLA, knocking down 26 of 43 from the arc in the process. Meanwhile, senior forward Antanas Kavaliauskas, who actually had a team-high 18 points at LSU, had three games in that span with at least 15 points, including a team-high 20 against Winthrop. The challenge for Gillispie? Getting one or both of those players to give the Aggies that production consistently in league play and beyond. The pair combined for a total of 26 points in a total of 88 (foul-plagued) minutes in hard-fought wins over Kansas State and at Baylor to open Big 12 play.

"[Their offense] hasn't been consistent. ... Kavaliauskas is a really nice player, but he hasn't scored like he had early in the season," Gillispie said. "He and Josh have scored in double digits, but one night, it's five [points] and the next, it's 20. We need them to have 15 a night. They need to be more consistent [if we're going to take that next step].

"A lot [of Carter's inconsistency] has to do with the attention being paid to Josh. People [especially in league play] aren't going to let him get his shots easily, and we need to do a better job of getting him shots."

Getting all of his players more looks is one of Gillispie's chief concerns. Collectively, at times, they seem to suffer from Aggie-oraphobia -- a fear of open shots.

"I think we're an efficient offensive team, but we need to get more easy baskets," he said. "We need to get more opportunities in transition, more steals, than we're getting, and play with a freer mind on offense.

"I never tell guys not to shoot it. I think our guys are over-selective on shot selection because they want to win so badly. I think they have to understand that we need to have balance inside and out and we to have consistency from more than two players."

The Aggies do have other flaws -- they tend to foul a lot and aren't terribly deep, especially in the frontcourt. That means that if Jones struggles early or gets in foul trouble, there's not a lot of cover -- or room for error. Still, you keep going back to the raw numbers, knowing full well that the Aggies, statistically anyway, stack up favorably against the performance of the last three national champs. You also realize that, while there is significant room for improvement in certain areas, Gillispie is pleased with his team's level of effort.

"Our motto [adopted from Kansas' Bill Self, a friend of Gillispie's] is 'Play hard, play smart, play together,' he said. "We're not there yet. We're doing about one out of the three. I think, sometimes, we're a brutal team to watch, but we usually compete real hard, and that's what we hang our hat on every day."

If they can find a consistent third scorer, the Aggies may be hanging a different kind of hat come March -- one with "Regional Champs" stamped on it.

Nuggets (with a side of context)
• When Princeton beat Rice 51-28 on Saturday, the Tigers didn't quite hold the Owls to the lowest point total in Division I this season (that would be the 27 points scored by Southern against Florida and by Grambling against Texas A&M), but they might have done something vastly more impressive. Princeton managed to hold Rice to fewer total points than what the Owls' leading scorer, Morris Almond, (over 30 ppg entering the contest) was averaging. We weren't able to dig up conclusive evidence of the last time this happened, but you have to think there's a chance it involved leather balls and peach baskets.

• One of the nation's most underhyped good players is Wyoming sophomore guard Brandon Ewing. Not only is Ewing chipping in 21.5 points along with 3.5 rebounds and 3.3 assists per game, but inch-for-inch, the 6-foot-2 Ewing is one of the nation's most devastating free-throw shooters. Ewing, especially for a guard, gets to the line a ton -- 130 times so far in 16 games -- and makes them at the second-highest rate (83.1 percent) of anyone in the top 10 in attempts (behind the aforementioned Almond). Ewing had a 19-for-22 night at the line Wednesday night in the Cowboys' overtime upset of UNLV.

Andy Glockner is the men's college basketball editor at ESPN.com. E-mail him with comments. Some of the data used in this column is from midmajority.com and kenpom.com.