When it comes to college basketball, Kentucky is Isaac Newton State. In the commonwealth, every hoops action causes an equal and opposite reaction.

When Louisville fans were depressed over their first-round elimination against Xavier in the NCAA Tournament, Kentucky fans were celebrating the Cardinals' demise. When Big Blue Nation was devastated two days later by the Wildcats' stunning upset loss to UAB, Planet Red was positively giddy.

The unflattering but undeniable fact: One school's loss is the other school's malicious glee. This state isn't big enough to accommodate empathy between archrivals.

On May 4, Rick Pitino officially lost star recruit Sebastian Telfair to the NBA draft. Two days later, he unexpectedly lost his No. 2 recruit, athletic junior-college wingman Donta Smith, to the NBA draft. The next day, Pitino announced that his No. 3 recruit, thick post man Brian Johnson, would undergo knee surgery this week that could ultimately sideline him all next season. Not even the late signing of much-touted 6-8 forward Tello Palacios could significantly brighten the mood in the 'Ville. 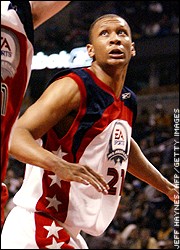 Just like that, a recruiting class ranked among the top three by many analysts had turned to dust -- perhaps taking 2005 Final Four aspirations with it.

"We're going to have a good team next year," Pitino said. "We'll be better than last year. Would we have been a great team with Sebastian and Donta? Probably, yes. We gambled and lost."

Meanwhile, Tubby Smith was putting the finishing touches on one of the greatest spring-signing hauls in recent memory. The day Donta declared, Smith got a commitment from Atlanta center Randolph Morris -- the third McDonald's All-American to sign with Kentucky this spring, joining guards Joe Crawford and Rajon Rondo.

Just like that, a program that appeared in danger of its first serious talent deficit in more than a decade is once again bursting with players. Unlike Pitino, Mike Krzyzewski, Mike Davis, Roy Williams and Stan Heath, Tubby will get all his star recruits for at least one season. He might have the No. 1 class in America because of it.

"This group is a good group," Smith said Tuesday. "Obviously, they've got a lot of work to do -- they've got to grow up. But the potential is great."

Smith didn't just sign a great class. He signed its marquee players from out of the backyards and back pockets of other programs.

Morris is from Atlanta, where he watched hometown team Georgia Tech make a run to the national title game. Not only that, his older brother was a manager for the Yellow Jackets. For months, the assumption was that the only decision Morris had was between Tech and the NBA.

Crawford is from Detroit and originally committed to Michigan. Tommy Amaker could offer him all the shots and minutes he desired in exchange for helping rejuvenate the Wolverines.

Rondo is from Louisville and grew up wanting to play for the Cardinals. Even after he transferred to Oak Hill Academy for his senior year, he kept the Cards at the top of his wish list.

Now all three have been redirected to Lexington. How did Smith do it?

He could offer Morris the one thing Tech could not: An immediate chance for maximum minutes. Hewitt welcomes back center Luke Schenscher, who blossomed in the NCAA Tournament, while Kentucky was scrambling for an alternative to unpolished sophomores Sheray Thomas or Lukasz Obrzut in the middle. If Morris doesn't start for the Cats next year, it will be a surprise.

(As an apparent signing bonus, Smith also offered Morris' brother a chance to transfer and become a manager at Kentucky -- thus making Jonathan Morris the most sought-after towel folder in college ball.)

He could offer Crawford a program that will compete for the national title right now, instead of a program merely aspiring to its first NCAA Tournament bid since 1998.

And he could offer Rondo the love and attention that Pitino was directing toward Telfair.

In a miscalculation that could haunt Louisville for years to come, the Cards thought they could keep Rondo on hold while waiting for Telfair to decide whether he was going pro or coming to school. Meanwhile, Rondo began putting up crazy numbers at Oak Hill -- 27 assists one game, 31 in another, 55 points in a third -- and wondering why he had to take a backseat to anyone.

Suddenly, there was Tubby-come-lately Kentucky waving a scholarship under the former Louisville Eastern High School guard's nose in late January. And there was Rondo accepting it, despite an apparent lead-guard logjam with fellow signee Ramel Bradley and Western Kentucky transfer Patrick Sparks.

Those three spring signing coups are enough to make Smith the Recruiter of the Year in college basketball. They're also enough to intensify the omnipresent pressure in the bluegrass.

When Smith was asked Tuesday about a greater urgency to "win big" after signing this class, his eyes flashed and voice hardened. "What you think we've been doing the last two years?" he fired back.

For the last two years Kentucky has been a fabulous 59-9 overall and a fat 35-3 against Southeastern Conference competition. Both seasons it has entered the NCAA Tournament as the overall top seed.

That's where the Cats crashed in a pair of shocking upsets to major underdogs from Conference USA. Consecutive sweet seasons wound up leaving a bitter aftertaste.

Smith is smart enough to know that his job description calls for more than dominating the SEC. He's smart enough to know that Kentucky's six-year streak without playing on the season's final weekend needs to end soon to maintain statewide serenity. That's why he followed his initial defensive reaction about "winning big" with a more candid answer.

"Yeah, we need to get to the Final Four," he said. "I'm pretty antsy about not getting there the past couple of years especially, because I thought we had teams capable of getting there."

Those Kentucky teams played with Final Four cohesion, intensity and savvy. They were the final validations of Smith's coaching ability. Yet they ultimately lacked the most important ingredient of all: Final Four talent.

It will be young talent, and Smith's younger Kentucky teams have not been his best, starting notoriously slowly. It will also be necessary for the above hamburger All-Americans to sublimate egos, defer to upperclassmen Chuck Hayes and Kelenna Azubuike, share the ball and embrace the coach's defense-equals-playing-time mentality.

Then there is the question of how long the window of opportunity stays open with this class. Morris gave serious consideration to going pro out of high school. Rondo has speculated about an early jump to the NBA. Surely Crawford, highest-rated of the three, doesn't see himself as a four-year collegian, either.

Of course, that hardly distinguishes them in a world where being called a college senior is a terrible insult.

"Every one of them thinks they're pros long before they're pros," Smith said of basketball players in general.

Donta Smith would fit that description. Smith's high school coach at Oldham County in suburban Louisville, Gary Forrest, was stunned by his former player's decision to turn pro. He said that Smith was telling friends what his dorm room number would be at Louisville earlier this month -- then suddenly he was declaring for the draft without notifying anyone.

"I just feel kind of sick," Forrest said. "I should have a happy feeling that we have a kid going to the professional ranks, but I don't. I hope I have to eat my words, but I don't think it's been thought out very well.

Plan B doesn't appear to be Louisville. Word is that Smith will sign with an obscure Chicago agent this week, ending any chance to return to school.

That's life in modern basketball, as Pitino is discovering.

"Of the top 20 to 25 kids we're recruiting who believe they want to go to college, right now there's a guy on every street corner in this country telling them, 'What do you think of going pro?' " Pitino said. "The agents have runners, the shoe compans have runners, the AAU teams have runners. Everybody's running. It's all part of this business, and it's all about M-O-N-E-Y.

It's hard to envision a worse week than the last week for Louisville. Or, equally and oppositely, a better week for rival Kentucky.

Pat Forde of the Louisville Courier-Journal is a regular contributor to ESPN.com