He's sitting in his office talking with a reporter when Boston College associate head coach Bill Coen pokes his head in and tells the boss that, basically, they're starting without him.

Skinner nods and keeps talking. About 15 minutes later, he unhurriedly hoists himself to his feet and heads to the court.

That's a false pronouncement, but not necessarily false modesty. Skinner's lack of pretense is legitimate, and it mirrors the collective ethos at the nation's capital of sporting overachievement and understatement.

Boston College is the school that hype forgot, and it really doesn't seem to mind the snub. If you're tired of hearing athletes and coaches cry about a lack of respect, drop by the stealth sports power in Chestnut Hill and enjoy the silence. America doesn't seem to need the Eagles, but they're making quite an appearance.

"I'm thrilled to death seeing the kind of success they've had this year," said ACC commissioner John Swofford, who took a beating when his league invited Boston College to become its 12th member, which it will be starting July 1. " ... For them to have the kind of year they're having affirms that they belong. That didn't need to be affirmed, but BC's been a little more under the radar than they deserve to be."

But as athletic director Gene DeFilippo said with a laugh: "It's not all bad to be underneath the radar."

Tucked away in the shadow of America's two most celebrated recent winners -- the Red Sox and Patriots -- the Eagles are piling up plenty of their own victories, should anyone bother to notice.

This school year, the football Eagles had 10 points in the preseason ESPN/USA Today coaches' poll -- good for a tie for 48th. They ended the year 9-3 and ranked 21st, their current five-year bowl winning streak is the longest in the land, and as an off-the-field bonus, the team won the 2004 CFA academic award for the nation's highest graduation rate (100 percent).

The disconnect between respect and reality is even greater in basketball. The Eagles lost just one starter from a 24-11 team that nearly beat eventual national runner-up Georgia Tech in the second round of the 2004 NCAA Tournament, yet it received zero votes in the preseason ESPN/USA Today poll. Forty-six teams made their way onto at least one ballot -- including Pepperdine, Purdue and Princeton -- but not BC.

Today, the same coaches who ignored the Eagles in November are acknowledging them in February, ranking them sixth. Even the legion of doubters who thought the 20-0 start was counterfeit and have been waiting for the collapse have to admit that Boston College is pretty legit. The Eagles' home game Saturday against Syracuse will go a long way toward determining the Big East regular-season champion.

But the success doesn't stop at football and men's basketball. The hockey team is No. 1 in the USA Today/American Hockey Magazine Top 15 and sells out every game in 8,000-seat Conte Forum. Women's basketball, a regular in the NCAA Tournament in recent years, is ranked No. 22 despite losing star Jessalyn Deveny for the season to a blown Achilles tendon.

That kind of broad-based performance makes BC the No. 1 Catholic-school power in the land, usurping a title that traditionally belongs to Notre Dame. (The Fighting Irish handed the Eagles their lone hoop loss thus far, but Boston College has now beaten Touchdown Jesus four straight years in football.)

In fact, BC is now encroaching on territory normally reserved for the superpower state universities -- the Ohio States, Texases and Floridas of college sports. And Boston College is getting it done on a tidy annual budget of about $40 million.

That's a bargain compared with the war chests in Columbus ($79 million), Austin ($75 million) or Gainesville ($60 million). Especially when you consider that BC expends $10 million of its budget on athletic scholarships, which are far more costly at the private school than at State U.

Right outside the window to DeFilippo's office, you see physical evidence of Boston College's relative fiscal sanity. An air-inflated bubble covers the artificial turf on Alumni Field, the football stadium. At a tidy $1.8 million it serves as the economical version of an indoor facility, providing a winter workplace for football, baseball, softball, field hockey, golf and other sports.

(Contrast that with the $12.4 million incoming Big East school Louisville will spend on an indoor facility. Louisville has artificial turf, as well, but it's not putting up any bubble. Will it really be getting six times the facility Boston College has?)

DeFilippo came to Boston College in 1997 after serving as the AD at Villanova for four years and as an assistant at Kentucky for six. After getting his master's degree at Tennessee in 1974 and getting into athletic administration, he set a goal of returning to Knoxville as the Big Orange athletic director.

The offer to go back to Tennessee came a few years ago. DeFilippo shocked everyone, including himself, by staying at Boston College.

"I have a terrific relationship with our president [Father William Leahy]," DeFilippo said. "He's a friend, confidant, advisor and co-worker. He's the real reason I've decided to stay here as long as he'll have me."

DeFilippo's affinity for BC trickles down to his coaches. Skinner and football coach Tom O'Brien are in their eighth years at the school. O'Brien, who regularly attends BC hockey and basketball games, has been wooed by other schools but remains. Skinner seems to have put down roots on Chestnut Hill.

If anyone has the personality to be comfortable at Under The Radar U., it's Skinner. His approach to coaching is laid-back to the point of something that looks like apathy, but clearly is not.

Skinner, a former ABA Rookie of the Year with the New Jersey Nets, played college ball at Massachusetts with another coach you might have heard of, Rick Pitino. They're polar opposites in style and demeanor, yet remain good friends.

Pitino calls Skinner by his old nickname, Bunny. He recalls the two driving home to Long Island from Amherst -- Skinner scaring Pitino to death by roaring along at 95 mph with the seat reclined way back, two fingers on the steering wheel, eyes half open, his left foot working the accelerator with his right leg stretched out sideways to relieve the ache of tendinitis. 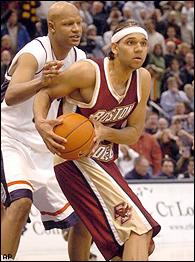 That was Al. Phlegmatic and unflappable, regardless of the setting.

"He was the last person any of us ever thought would be a coach," Pitino said. "But the very reason we thought that has turned out to be why he's a great coach."

In a manic profession, Skinner is the embodiment of utter calm. In a milieu dominated by obsessive workaholics, Skinner takes time to play pickup basketball at noon every day -- and will even allow himself to run a few minutes late for practice. In a land full of screamers and stompers, Skinner communicates with minimal volume or volatility.

"In four years, I heard him yell at practice once," said Dan McDermott, a former manager on the basketball team who now works in the school's sports information department.

When it's time to correct a player during practice, Skinner doesn't go off. He walks by the player, murmuring his point as he goes.

"I don't have to berate someone in front of everybody," he said. "This is information for that player to have, not everybody."

In the same vein, Skinner isn't going to deliver much fire and brimstone in the pregame locker room. By all reports, he is the anti-Rockne.

"Once a guy puts on a uniform, he gets himself ready to play," Skinner said. "We all need a kick in the butt once in a while, but if you're getting it on a constant basis, you may not be my guy. And that's fine. This is not Utopia."

In his first head-coaching job, at Rhode Island, Skinner's blasé sideline presence led then-AD McKinley Boston to have a talk with him.

"People wonder about you," Boston told Skinner. "Whether you're really coaching."

"Mac," Skinner replied, "people have been wondering about me my whole life because of what they see. If you take some time and look at the results, let's see if I deliver. But if you want the show, I may not deliver that. I may not be your guy."

After a slow start at Rhode Island, Skinner got the Rams to the postseason in four of his final six years. He went 40-24 in his final two seasons and left a loaded roster for Jim Harrick to take to the Elite Eight the year after he left for BC.

Once here, Skinner wobbled to a 32-56 record his first three years. Since then, BC has been a legit national presence every year, doing it with recruits of modest renown.

The Eagles didn't exactly beat out the best of the Big Ten for guards Troy Bell (from Minnesota) and Ryan Sidney (from Michigan), the catalysts on their 27-5 team of 2000-01. Nor did they have to outfox the Pacific-10 powers to get the stars of this team, Californian forwards Craig Smith and Jared Dudley.

The recruiting classes never generate much frothing, and even the current 21-1 record remains a subplot to Sox spring training and Tedy Bruschi's health -- which is fine with Skinner. He can go weeks at a time without seeing his name in headlines and not worry about it.

"I know what my goals are, I know what we're trying to accomplish. I don't need people to tell me about it. ... I recognize what the business is.

"We've had some bad years here. I didn't need a [newspaper columnist] crushing me because we weren't winning. My players didn't have to suffer publicly, and that's good. I appreciate that more than I feel like we need to be acknowledged for our success."

Al Skinner had better be careful. He might mess around and win so many games that the world has no choice but to acknowledge him -- and his under-the-radar Eagles.