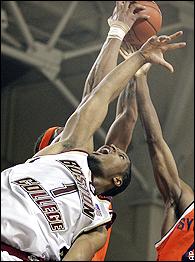 Forgive the exuberant kids at Boston College, who violated Rule No. 3 Saturday night in crazed Conte Forum. Their No. 6 Eagles beat No. 9 Syracuse 65-60 and controlled the game throughout, trailing for a grand total of 2 minutes and 35 seconds. Yet when it was over, the students surged onto the court as if this were Virginia Tech beating Duke.

Truth be told, the BC fans knew that their guys were viewed in some skeptical quarters as Team Helium -- artificially inflated in the polls. And they knew that the opponent was Syracuse, two years removed from a national title and still widely considered the best Big East prospect for a Final Four run.

"We definitely needed to win, respect-wise," said stellar sophomore forward Jared Dudley. "We needed to show we could beat an elite team."

So even at 21-1, with the only loss by three points on the road to a decent Notre Dame team, this was a prove-it game for BC. When the final horn sounded and the proof was on the scoreboard, the students made a collective decision: damn the rankings and storm the floor.

"It's about time," senior guard Jermaine Watson said with a laugh. "I've been ready for this since I came to college. I've been waiting for my opportunity to dance with the crowd."

BC danced, and a wider slice of America believed. Pending further developments, it's now time to slot Boston College as the fourth No. 1 seed for the NCAA Tournament.

"Now they know who we beat. It's not a question anymore. We've beaten Connecticut, we've beaten Syracuse and we're on top of the Big East."

"Everyone keep sleeping on us, and we'll keep winning. Put whatever number next to our name you want to."

Asked if this win will change the nation's perception, powerhouse forward Craig Smith said, "Nope. They're probably going to have us lose at Villanova (Wednesday on ESPN2). Pittsburgh is probably going to be favored to beat us (Feb. 28 on ESPN). We're always going to be under the radar."

There is no hiding the talents of Smith and Dudley, the best forward tandem in America.

Dudley has the numbers to be Big East Player of the Year. In conference play he ranks among the league's leaders in scoring (18.9 points per game), rebounding (8.4), assists (3.2), steals (1.7), field-goal percentage (48.4), free-throw percentage (75.6) and assist-to-turnover ratio (1.8 to 1). The barely 6-foot-7 Dudley was at his best in the second half against Syracuse, scoring 16 of his 21 points in a variety of ways -- none bigger than a how'd-he-do-that tip-in of his own miss, while sandwiched between 6-11 Darryl Watkins and 6-8 Hakim Warrick.

But ask BC coach Al Skinner who would get his Player of the Year vote and he'll give it to Smith. After the 16 points and 15 rebounds he put up Saturday night, muscling right through Syracuse shrinking violet Hakim Warrick, you can understand why.

Said Watson of Smith: "He's our workhorse. He's the strongest kid in the Big East, and he goes at people. He opens it up for a lot of people."

Nice as the two forwards are, it's time to appreciate the supporting cast. They help make Boston College physical enough to hammer Syracuse on the glass 45-31, tough enough defensively to make Orange bomber Gerry McNamara go 5-for-17, and unselfish enough to shred Syracuse's renowned zone for 19 assists on 22 baskets.

The best way to beat a zone is with passing, and BC proved it last night. They got the ball into the paint regularly, found holes in Jim Boeheim's 2-3 on the baseline and whipped it crisply around the perimeter.

"I clearly think that's one of the strengths of this team," Skinner said. "When your five man [Nate Doornekamp] is getting six assists in a night, that says something about the quality of our ball movement."

The same cannot be said of the Orange, who now have lost three of their last four in close fashion against rugged competition. Syracuse somehow allowed Warrick to go long stretches without touching the ball, as he took just three shots and scored two points while playing the entire second half.

Asked how they kept the ball away from Warrick, Skinner said it was nothing special.

"You've got to ask Syracuse that question," he said. "I don't know why he didn't get more shots. We didn't do anything different in the second half."

Warrick certainly did not play with All-American assertiveness in the second half. BC believes taking the fight to the lanky senior took the fight out of him.

"Play physical with him," Smith said. "He doesn't like the physical stuff. He likes to get in space, and we didn't give him no space.

"We just like throwing bodies around. Once we do that, we're having fun."

Once the game was won, the entire school had plenty of fun. Protocol was out the window, the students were on the floor and Boston College had proved itself to a skeptical nation.