WHOSE MICROCHIP DO YOU TRUST?
For the next three weeks, every hoops-related conversation will contain three letters that are conveyed with stone-tablet importance: RPI. But the Ratings Percentage Index will not be the only set of power ratings available to the NCAA Tournament selection committee when it convenes in Indianapolis next month. There will be plenty of computer rankings at the members' disposal as they go through the arduous process of finalizing the field of 65.

Here's the thing: If you look at some of the other ratings available -- most notably, those produced by stat monsters Ken Pomeroy and Jeff Sagarin -- you get a dramatically different picture than what you see from the RPI. Perhaps this year more than ever, their computers simply don't agree on some of the teams that will figure prominently in the committee's discussions.

Most striking is the difference in ranking the best mid-major programs: RPI, which was changed this year to add greater reward for road wins and greater penalty for home losses, looks much more kindly on the mid-majors than do Pomeroy and Sagarin. If the committee sticks to its RPI guns, we could see more of the little guys with higher seeds than ever before.

Here are 10 schools hoping that the committee thinks RPI first, last and only (rankings as of Feb. 20):

And five more who hope the committee wads up the RPI and looks at the other rankings:

REVERSALS OF FORTUNE
We've seen several rematch games turn out drastically different than the first meeting of the season. (What a difference home court makes.) The Minutes' top five turnarounds this year:

FORDE MINUTEMEN
This is The Minutes' inaugural team of guys who are simply a pleasure to watch play basketball. The only requirement for making the Minutemen squad is that the players not lead their teams in scoring:

Dee Brown, Illinois (21) -- Luther Head scores more and Deron Williams is the straw boss of the Illini, but nobody plays with a more apparent joy than Brown, and nobody has a greater knack for rising to the occasion when his team needs it. His brassy 3-pointer put away Iowa on Saturday, and his three successive steals bailed Illinois out of a second-half hole at Michigan.

Josh Pace, Syracuse (22) -- Pace has an amazing knack for getting into the paint and getting onto the offensive glass. While everyone fixates on Hakim Warrick and Gerry McNamara, Pace pops up routinely to make big plays.

Chuck Hayes, Kentucky (23) -- Tubby Smith has coached plenty of great players, but none he's enjoyed more than the hard-working Hayes. All he's done for four years is everything: He has more than 1,000 career points, 500 rebounds, 250 assists, 140 steals and 100 blocks.

Ellis Myles, Louisville (24) -- The walking definition of a college success story. When Myles arrived from Compton, Calif., he was a portly punk with bad work habits and a bad attitude. Rick Pitino transformed his body and Myles adjusted his outlook to become the Cardinals' hard-edged team leader.

Eddie Basden, Charlotte (25) -- Can literally do anything on the court, from scoring (15.6 points per game) to rebounding (8.5) to assists (3.7) to steals (3.3). Will probably be the Defensive Player of the Year in Conference USA. 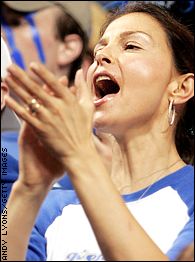 Sixth (wo)man: Ashley Judd (26). What, you were expecting someone else?

COACH WHO EARNED HIS COURTESY CAR THIS WEEK:
Karl Hobbs (27) has George Washington back on track after a midseason bobble. The Colonials have won five straight by an average margin of 15 points to reassert themselves as the best team in the Atlantic 10.

COACH WHO SHOULD TAKE THE BUS TO WORK THIS WEEK:

The entire Division I triumvirate in Kansas (28). Bill Self's Kansas team has lost two straight overtime games. Jim Wooldridge's Kansas State team has dropped six straight, losing on a prayer of a shot by Oklahoma's Drew Lavender on Saturday. Wichita State has gone from one of the hottest mid-majors in the land to a team shaken by its own three-game losing streak. For the love of Toto, somebody win a game in that state, will ya?

THE OTHER UNBEATEN
And you thought Illinois had the only perfect record in the land. Don't forget about mighty St. John Fisher (32), a Division III outfit that finished its regular season 25-0 Saturday. The Cardinals had to sweat it out, nipping Utica 60-59. Jeff Sidney made the winning shot with 1:27 left. Congrats to the Cardinals.

FANTASY 3-POINT SHOOTOUT, WEEK THREE
This week The Minutes has matched Pat Carroll (33) of St. Joseph's, who is making 3.7 3-pointers per game, against Will Whittington (34) of Marist, who nails 3.6 per game. Let the sharpest shooter win.

To recap: Week One winner was Charlotte's Brendan Plavich. Week Two winner was Duke's J.J. Redick, who defeated Louisville's Taquan Dean in a shootout that went into Sunday night to decide. Redick's six 3s against Wake Forest gave him nine for the week, trumping Dean's six for the Cardinals.

... Former St. John's forward Walter Berry (35). If anyone has updated information on the Johnnies' tough lefty from the mid-80s, please advise The Minutes.

This seemed like an apt week to find a player from the Big East heyday. St. John's (36) beat Georgetown (37) Sunday in New York, 20 years after that was the best rivalry in the nation. Patrick Ewing, Chris Mullin, John Thompson and Loooie Carnesecca had nothing to do with this one, however. How far has the rivalry slipped? The Hoyas haven't won an NCAA Tournament game since 2001, and the Red Storm hasn't won one since 2000. All you need to know about the present state of the rivalry: The game Sunday wasn't televised.

Last week's subject, erstwhile Baby Jordan high flier Harold Miner (38), is maintaining a fairly low profile these days. However, Miner is believed to own a fat chunk of land with a nice house on it in Las Vegas, apparently having put the money Nike threw at him when he came out of USC to good use.

LAST-SECOND SHOT
When hungry in Boston, The Minutes highly recommends the best pizza on earth, which can be found at Pizzeria Regina (39) in The Hub's Italian-intensive North End. Visitors with a sense of adventure should ask for waitress Lynne Power, a saucy 18-year veteran of the joint who brings the 'tude wicked-hahd.

After pizza, The Minutes recommends a beverage at the Littlest Bar in Boston (40), a cool downstairs spot that lives down to its itty-bitty name. Capacity is alleged to be 37, but 20 was plenty during our visit. Tour guides Pistol Pete and McKenna swear that the place actually had a three-piece band play in it once, but The Minutes didn't see room for more than a man with a harmonica.