Top-ranked Illinois lost its unbeaten regular season at the wire, stunned at Ohio State. Third-ranked Kentucky blew a late lead and lost to its personal whipping boy, Florida, for the first time since 2001. In position to win the Big 12 outright, No. 7 Kansas capitulated against the biggest disappointment in the league, archrival Missouri.

And in a disturbed Dean Dome, No. 2 North Carolina looked like it was next.

In a season where the talent-laden Tar Heels were supposed to step on the neck of depleted uber-rival Duke, they instead found themselves on the verge of being swept in the annual two-game series. The largest crowd in the history of the Dean E. Smith Center (22,125) agonized as Carolina stumbled from seven points up to nine down in 13½ nightmarish second-half minutes.

The Blue Devils led 73-64 with less than three minutes left. Mike Krzyzewski was poised to go 4-0 against Roy Williams since Ol' Roy relocated to Tobacco Road. Desperation was in the air -- but determination was in the Carolina huddle.

"If you keep fighting," Williams told his team, "we'll be there at the end."

"I think everyone thought it was over, but we knew it wasn't," said indomitable North Carolina center Sean May, whose 26-point, 24-rebound performance was one of the great individual efforts in the history of this gilded rivalry. "We don't quit. We're not the type of team that quits. Last year we probably would have given in with four minutes to go."

This year, a grittier team capped a day of building drama with one more twist: a near-miracle Carolina comeback. Just when you think this rivalry cannot get any better, along comes a game like this.

The Heels scored the final 11 points, triggering a seismic celebratory eruption. As the bleachers shook and then spilled students onto the floor, one thing was evident: It's a wine-and-cheese crowd no longer in powder blue -- at least on the days when Duke comes to town.

When this 75-73 triumph was in the books, Williams got on the courtside microphone and shooed everyone off the floor. Then he had his players cut down the nets to celebrate their Atlantic Coast Conference championship.

"I'm big on letting kids celebrate," Williams said. "We will be criticized for it like everything you do in coaching. ... If some people don't like it, OK.

"The other part of it is, those three seniors that were 8-20. I think they deserved to have some fun."

"It was so embarrassing," Scott said of his freshman season. "But we hung in there, and now it's a brighter day. It's been a long time coming. I'm going to cherish this."

They could cherish completing this comeback, after executing hideously in a similar last-minute rally in Durham a month ago. Sunday, Carolina won by scoring the final four points in a 2.4-second span, between 19.4 and 17 seconds remaining. Then it withstood two good looks at the basket from Duke's two best shooters, J.J. Redick and Daniel Ewing, to win the game and the ACC title outright.

"I thought we were going to win in Durham, and we botched it up about as bad as you can," Williams said. "Today we made some plays. I think there was some determination the guys had to go get the basketball."

The determined Heels got the basketball when they needed it two different ways: off the glass and via turnovers. 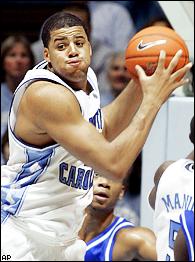 They destroyed smallish Duke 48-30 in the rebounding department, behind the Chamberlainesque effort of May. Carolina got four offensive rebounds during the final rally, the last one the biggest. Freshman Marvin Williams snatched a missed Raymond Felton free throw that had been kept alive by Felton himself, scored and was fouled with 17 ticks left. Williams made the free throw for the final margin.

Before that, Carolina gouged two turnovers out of Ewing, who was pressed into more ball-handling duties than desirable by the recent knee injury to guard Sean Dockery. Ewing's final turnover came with Duke clinging to a two-point lead and less than 30 seconds left, as Tar Heel David Noel poked the ball loose and then won a feverish scrum at midcourt, calling timeout before he could be tied up.

"They made some big plays down the stretch," Krzyzewski said, "and we didn't."

Duke backpedaled in a fashion similar to its Final Four loss to Connecticut last year. The Huskies scored 12 straight points late in that game on their way to the national title. This time the Blue Devils aided and abetted Carolina's rally by missing their final five free throws, and a fatigued Redick (39 minutes, zero points in the second half) missed two open 3-pointers -- one that could have been the game-winner.

And May was superhuman. In a throwback center matchup, the junior with Jerry Rice's hands and a tight end's size won a ferocious battle with Duke's Shelden Williams.

Williams made 10-of-13 shots, scored 22 points, grabbed four rebounds, blocked six shots and made four steals. On a normal day, that would be headline material. But on a day when May seemed to devour nearly everything that came off the rim, Williams was the second-best center on the floor.

"This is one of the remarkable performances by a kid," Krzyzewski said. "Twenty-six and 24 in the Duke-Carolina game? That was fantastic."

Roy Williams gave May a rebounding pep talk Saturday in practice. The junior already had seven straight double-doubles coming into this game -- a streak that started with 23 points and 18 rebounds at Duke -- and the coach wanted to see him do even more.

Did he ever. The 24 boards -- a dozen offensive, a dozen defensive -- was the most by a Carolina player since Rusty Clark set the school record with 30 in 1968.

"He always tells me, 'You're almost at Nick Collison's level,' " May said, referring to Williams' star rebounder at Kansas. "Today he told me that was a Nick Collison performance."

Given the opponent and the stakes, it was a performance that they'll talk about in Chapel Hill for years to come.

They move on to the ACC tournament now, Duke and Carolina, and beyond that, the NCAAs. That's the big prize, of course, and the Tar Heels could easily enter as the team to beat. (That's the one issue that might have been cleared up on Sunday, bluebloody Sunday.)

The season's climax awaits. But even a national title celebration might find a rival in the eruption of joy that ripped through the Dean Dome on Sunday. This was more than just prelude. This was an unforgettable March moment in its own right.