CHICAGO -- Jack Ingram was a Bill Self kid. Played for Self at Tulsa and then followed him to Illinois, only to wind up with Bruce Weber as his coach his final two years.

In testament to how much this Illini team has coalesced around The Replacement Coach, it was Ingram who spoke on behalf of the team to Weber on Saturday morning at the team's shootaround. It was Ingram's words that brought the tears to Weber's eyes. 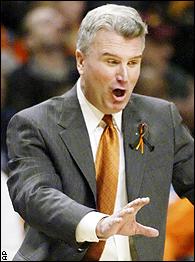 "I just wanted to thank him for coming here today and being able to coach us and lead us," Ingram said.

"I'm going to coach hard, you're going to play hard," Weber told his players. "That's how she would've wanted it."

"She" was the coach's mother, Dawn Weber. She died Friday night at a nearby hospital after suffering a ruptured aorta before entering the United Center to watch her son coach in the Big Ten tournament quarterfinals. She was 81.

Less than 24 hours later, Bruce Weber was bowing his head and blinking back tears on the sideline, as the United Center went still in a moment of silence for his mom. The coach didn't emerge from the Illinois locker room until 1:15 was left on the pregame clock, and was greeted with a standing ovation and a sympathetic "Bruuuuuce" from the majority-orange crowd. In the stands, a fan held a sign that read "Saddened by your loss, inspired by your courage."

Weber got a hug and some kind words from Minnesota coach Dan Monson, then finally settled in to watch his Illini win ugly, 64-56. But even this over-earnest muddle of a game must have come as a relief.

"There's been a lot of tears since 6 o'clock (Friday)," Weber said. "Tears of good, though, because of all the times we've had together. She was a great mom. But it is emotional. It does put a little knot in your stomach."

And a lump in your throat. Bruce Weber swallowed hard and coached through it for the players who rallied around him -- players who referred to him as the "father figure" in their basketball clan. From total strangers two years ago to this moment, players and coach have come a long way together.

Bruce Weber's real family wanted to see him work Saturday. Dawn Weber would have wanted it that way, everyone agreed. She had a satellite dish and watched as many Illinois games as possible. The last time she talked to Bruce, on Tuesday, she told him how amazing it had been to watch him coach the No. 1 team in America.

"She said it was a fairy tale," Weber recalled.

Fairy tales don't have these kinds of sad endings. This was real life, and real tragedy. But in order to complete a fairy-tale season, Bruce Weber needs to be coaching basketball.

"Basketball became a major part of our life," Weber said. "She loved it, my dad [also deceased] loved it, and we felt it would be the best thing to do."

Bruce's brother, David, a high-school coach in suburban Chicago, coached his team Friday night as well. It's the family business and the family passion, so Weber was there for his players Saturday afternoon, submerging his fresh grief for a while.

Sometimes the routine of life is the best balm for the pain of death.

" If we could've given him a two-hour break, if he could get lost for a while from the pain, maybe that would be a good incentive for us," Ingram said.

In fact, the incentive might have been too powerful. Illinois played as if it were trying to lighten the mood on every play, to get everyone cheering instead of brooding, to overwhelm sadness with the spectacular.

Instead, we saw that the road to ugly basketball was paved with good intentions. The Illini threw the ball all over the United Center, turning it over a season-high 23 times.

"Maybe we came out a little too juiced up," Ingram said, and his coach agreed.

"I thought early in the game the kids had too much emotion," Weber said. "They were going too fast."

Illinois put away the Gophers more with resoluteness than the beautiful basketball that has made it so popular nationally. The Illini crushed Minnesota on the glass, 45-33, made just enough shots and forced 20 turnovers of their own.

That was good enough to survive and advance to the tournament final Sunday against Wisconsin, which held off Iowa in the other semifinal. Weber will coach that game, too, then watch the NCAA Tournament selection show to see the setting for the season's final chapter.

Meantime, he and his family will try to plan a funeral in Milwaukee around his and David Weber's basketball schedules. This should be the highlight time of a 26-year coaching career, a thrill that may never come around again -- and now it occurs under the pall of his mother's death.

Weber can ride the excitement and adrenaline of March Madness for the coming weeks, and that might be a good thing. When it all slows down -- that's when Weber will probably need some time and space for an emotional crash.

Until then, another element is added to an already compelling Illinois story. Not necessarily a happy or welcome element, either.

Saturday, the story was Weber and the kids, and how they supported him in his time of need. He's not a Replacement Coach anymore. He's the head of the Illinois basketball family.