When John Swofford and the ACC presidents who supported him raided the Big East, the backlash was swift and severe. And not just from Big East commissioner Mike Tranghese.

Discontent rippled down the seaboard. Fans, media members and even some prominent Tobacco Roadies (raise your hand, Coach K) decried the power grab as an assault on tradition. And they prophesized that this football-first decision would inflict immediate damage upon the league's signature sport, basketball.

Then their basketball teams, widely picked to finish 10th (Hokies) and 11th (Hurricanes) in the 11-team league, wound up tied for fourth and sixth. That was a shock.

And that might simply have been a warm-up act. Don't look now, but 2005-06 could see Virginia Tech, Miami, and new member Boston College all in the top half of the 12-team ACC  if not the prime teams chasing Duke for the league title. 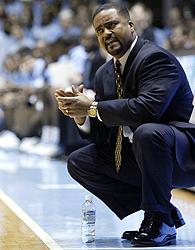 That scenario would vindicate Swofford and the schools he recruited. Some maudlin old-schoolers will never forgive them for dismantling the ACC's round-robin basketball schedule and forcing a makeover of the league tournament, but the bloody battle to expand is a single season away from being pronounced a success in the one area it was most criticized.

"The first thing people say when they recruit against Virginia Tech or Miami, they say they're football schools," Hokies coach Seth Greenberg said. "What [the success] does for both our programs, it validates our vision a little bit."

And Boston College's, too. It would be a jarring sight see most of the league's old guard chasing the Big East carpetbaggers on the hardwood  and it could happen.

Besides the Blue Devils, everyone but the Big East newcomers has significant issues.

North Carolina's junior class is down a Rashad, should soon be down a Raymond and could lose a Sean shortly thereafter (although Scott May said Tuesday that a stray Internet report that son Sean had decided to turn pro was news to him). As the talent leaks out of Chapel Hill, you wouldn't blame Roy Williams for locking sublime freshman Marvin Williams in his dorm room from now until the May 14 early-entry deadline passes.

Beyond the national champs? It's not pretty there either.

Wake Forest has lost star point guard Chris Paul, as well as three key seniors and maybe inside force Eric Williams, who declared for the draft.

Maryland looks certain to lose point guard John Gilchrist. Although Greenberg said that development "might be addition by subtraction," the junior still led the Terps in minutes played and assists, and was third in scoring and fourth in rebounding. Gary Williams also has to reshape his staff after losing two assistants to head coaching jobs.

It just gets worse elsewhere ...

Georgia Tech's out four integral seniors and may lose point guard Jarrett Jack. Leonard Hamilton's rebuilding job at Florida State, already set back by a bad 2004-05, might get harder if sophomore swingman Von (What Am I Thinking?) Wafer keeps his name in the draft. North Carolina State (Julius Hodge) and Clemson (Sherrell Ford) lose their do-everything stars. New coach Dave Leitao steps into a straight uphill climb at Virginia.

Meanwhile, it's all sunshine for the newbies.

BC returns almost every formidable weapon from a team that began the year 20-0. Forwards Craig Smith and Jared Dudley will be immediate all-conference candidates, and shot-blocking freshman center Sean Williams could be a blossoming monster.

Virginia Tech loses only its No. 2 scorer, Carlos Dixon, and gets back 2003-04 starting guard Markus Sailes, who sat out all last year. The Hokies have also signed a couple of 6-9 recruits and are high on 6-11 Dutch center Robert Krabbendam, who showed glimmers of potential late last season.

The talent definitely is there. The one thing these teams won't have on their side next season? Stealth.

Everyone in the ACC now knows how hard it is to win in Blacksburg, and what kind of athleticism lies in wait in Coral Gables. BC? The Eagles were as high as No. 3 in the nation at one point this past season.

The element of surprise will be gone, and the coaches are acutely aware of that.

"Oh, man, pick us last again," Haith said with a laugh. "We're not going to surprise anybody. Our deal changes a little bit."

Said Greenberg: "I don't think people knew about us. They will now. Some people will probably put a little heat on us (with higher preseason rankings and expectations), but that's all right."

In fact, both coaches were horrified at the very premise of an ACC talent drain, and how it might improve their teams' chances in '05-06.

"I don't know that we can, as a program, worry about looking at other teams and their personnel," Haith said. "We need to worry about our own personnel, building our program and getting better. The worst thing we can do is think we should be ahead of some of those teams now because they've lost some guys. It would be a mistake thinking the league is going to be down."

Said Greenberg: "For us to get caught up in where people are picking us now is crazy. There's such a slim margin for error in this league. Other teams lose guys, but they're going to get guys.

"Now, am I excited about the players next year for us? Yeah. I'm very excited. I think they're winning players with a toughness to them, and they got a taste. I like our team. We've got three guys who have basically started 60 games in two years. We're not anywhere near where we want to be, but we got a start."