Raymond Felton is the latest in a talented pool of players who grew up in South Carolina. From Ray Allen to Kevin Garnett to Jermaine O'Neal, South Carolina has generated an incredible amount of basketball talent.

While Felton is not by any means in the category of the other three SC boys, he may well be just as important to his college team as they are to their NBA teams.

Remember, in North Carolina's only loss of the season, the Heels were without Felton. With him, they have seemed close to invincible.

What he does well
While the words "true point guard" are used often in college hoops, Felton is the truest of them all. He understands time, score, and momentum -- abilities made even more important given Roy Williams traditionally allows his point guards to call both offenses and defenses.

Great fast-breaking teams have a mindset that programs them to "think break," and Felton does just that. When he catches the ball, be it off of an inbounds pass or a rebounded outlet pass, he is always headed down court with big, ground covering dribbles. One reason his teammates run the floor so hard is that Felton will get them the ball up the court when they come open. Sean May will sprint down and post up and Felton will constantly look for a low bounce pass in to the big fella.

Felton controls the game with a deceptive quickness, lulling defense to sleep with a high dribble and a crossover that borders on a "carry." He very rarely seems rushed and almost never takes a bad shot. This season, he's shooting over 50 percent from 3-point range, yet he turns down most 3s unless he is in perfect rhythm and range.

While from afar, one would look at his shooting numbers and think he is a "sniper," his shooting is probably the weakest part of his game. Felton hides it well, though, by playing to his strengths. 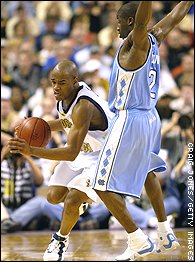 While he is not a top-three scorer for the Heels, he will take over games and take and make the big shots, drives, steals and assists. Never underestimate his ability to finish with a dunk or the use of the backboard. He drives with purpose.

Listed at 6'1", 198 pounds, he is every bit the football body he was in high school. In fact, his defensive back mentality is a big part of what triggers the defensive pressure that Carolina loves to play. Solid, strong and with slight of hand, Felton is a good defender who will excel at the NBA level because his strength keeps bigger guards from posting him up.

What he needs to improve upon
Felton is an improving shooter, but he is still a work in progress as a shooter/scorer. There are times when you almost want him to shoot more, but he has completely bought into the Roy Williams system and therefore he quells his own offensive desires.

For now he only shoots open 3-point shots, but he needs a fast break pull-up 3, the shake-in-place "stare down" 3 and the deep pull-up behind the screen-roll to become a complete 3-point threat. Also, he is a solid mid-range pull-up shooter, especially going right, but a step-back going left and a little more "game" off the dribble would complete the skill set.

All in all, despite the incredible numbers to this point, he can tend to look tentative shooting and that should end with the confidence he continues to build in himself and from the coaching staff.

Lastly, Felton may want to stay in school one more year just to be the "man" more offensively. He will be a first-round pick whenever he comes out, but another year to score more and round out his game may make him more valuable later in his career.

Jarrett Jack is big, strong, physical and tough. He's one of those big guards who actually knows how to use his size to his advantage.

His broad shoulders have learned how to to carry his team from what was a difficult first year into what, statistically, is an outstanding junior year thus far.

When Jack walks onto a college court all eyes tend to stare at his physique and as the game begins that body tend to intimidate smaller guards.

What he does well

Jack is becoming a solid shooter, but his strength is in his pull-up jump shot and his ability to drive, create contact and score.

As a very potent free throw shooter, he loves contact; in fact, he uses that contact to bump off opponents and help him balance on his pull-up jumper. He can go left to drive and sometimes shoot, especially behind a pick and roll, but his right hand is his strong hand and he can elevate in the lane off that dribble as well as any guard in college basketball. He is always at the free throw line because of his physicality.

When he is intense at the defensive end, he can be very physical with smaller guards, but he has transitioned somewhat this year to covering opposing 2-guards with the continued emergence of Will Bynum. He is effective in a full-court press, especially because it speeds the tempo, where he seems more comfortable.

As a passer he is solid, but not spectacular in the halfcourt. In transition, however, he is a whole different animal. He has great end-to-end speed and because he can pull up on the break, the back end of defenses open themselves up to alley-oops and solid looks to his teammates.

He is best in the big games (like his 10-for-12, 26-point performance at Kansas, or his leading the team in scoring in the NCAA tourney last year) and he is usually option No. 1 coming down the stretch for the Jackets.

What he need to improve upon
Jack will have some high turnover games when he tries to be too creative with his passing. It is important that he knows how much better his team is when he cuts down his turnovers. In fact, during his freshman year the Jackets made a run with Chris Bosh in the NIT, and a main reason was that Jack reduced his miscues.

He also is an improving 3-point shooter who must not rely on deep jumpers. His game is well-rounded, but better inside the line. His handle sometimes seems a little questionable. Whereas most point guards handle the ball as if it is an extension of their fingers, Jack sometimes pats the ball awkwardly, especially with the left hand.

Lastly, he must take the same attitude toward the weaker teams in the ACC as he does toward Maryland, UNC, Duke and Wake. He sometimes coasts in games where he does not feel a personal challenge. Case in point, Gonzaga was able to do anything they wanted with the Jackets and Jack and it seemed like they did not respect the Zags.

Bottom line, both of these guys love the big game and though one is more of a scorer than the other, their level of importance is equal to their teams. Their size and strength may make them stick out in the airport, but their competitiveness sets them apart in the ACC and beyond.

Doug Gottlieb, a college basketball analyst for ESPN and the co-host of GameNight for ESPN Radio, played point guard at Notre Dame (1995-96) and Oklahoma State (1997-2000). He will provide player breakdowns for ESPN.com throughout the season.