I am the ESPN era.

I'm 30 years old, and my earliest memories of college hoops in January are of racing home in California to watch three straight big-time games on Big Monday. The Big East was first, with Georgetown and John Thompson usually playing Syracuse at the Dome and Derrick Coleman catching alley-oops from Sherman Douglas. Next up was the Big Eight and Kansas taking on Oklahoma, with names like Mookie Blaylock and Mark Randall. Finally came the Big West -- or the PCAA as it was previously known -- which had the great UNLV team of Gerald Paddio and Mark Wade.

"Send it in, Jerome!"; Kenny Anderson spinning Bobby Hurley around like a top; and players such as Jim Jackson, B.J. Armstrong, Scott Skiles, Loy Vaught, Glen Rice and Doug Smith are popping into my head. Before the student sections all had names, before the arenas looked straight out of the NBA and before the era of one-and-done players, college basketball had a wealth of talent to whet my young appetite.

So which players would be on the Mount Rushmore of this, the ESPN era?

I chose to punish those who left after only two years of college hoops. To be on the Mount Rushmore of college basketball, you must leave a lasting legacy, and two years does not do that. Everything else is subjective: score points, gain rebounds, dish assists, win games and set records and I will have remembered you.

There are some big names I had to leave off, though, because of the two-year rule.

Anderson was the truth at Georgia Tech. He led the Yellow Jackets to a Final Four, averaged more than 20 points a game in both of his seasons in Atlanta and actually had more assists in his freshman year than Hurley had in any season during his record-shattering career, but there was no legacy because of the lack of tenure.

Glenn Robinson also was a two-year wonder at Purdue, where he led the Boilermakers to the Elite Eight and led the nation in scoring at 30 a game. With academics keeping him out one year and the NBA taking away another, "Big Dog" simply did not last long enough in West Lafayette to make my list.

The same goes for Chris Webber, Carmelo Anthony, Allen Iverson, Shaq and Chris Jackson. Even Michael Jordan, even though he played three seasons, had only one "great" year in Chapel Hill before heading off to the NBA.

So who is left in the ESPN era to fill a Rushmore list of four?

Let us actually begin with a two-year wonder -- of sorts: Larry Johnson of UNLV. Although Johnson played only two seasons with the Runnin' Rebels, he also played two at Odessa (Texas) Junior College, and many have called him the greatest junior college player ever. At Odessa, he was a two-time junior college player of the year and averaged more than 26 points and 11 rebounds per game before transferring to UNLV.

In Las Vegas, he was the most feared and dominant player in college basketball player for two seasons. He made opponents quiver the way Mike Tyson mentally shook heavyweights at the time. In one UNLV matchup against then No. 2 Arkansas, Todd Day decided to throw a punch at Johnson -- but only by taking several steps backward both before and after the punch was thrown.

Johnson's strength, explosiveness, speed and understanding of the game were unlike those of any other power forward who has played college ball since. He was a two-time consensus first-team All-American, averaging 21.6 ppg and 11.2 rpg over those two years, and won the Wooden and Naismith awards.

Johnson also helped lead the Rebels to the most dominating national championship win of the modern era when UNLV beat Duke 103-73 in 1990. In LJ's senior season, the Rebels were 34-0 before losing to Duke in the national semifinals. His teams finished 69-6; he won POY awards at the juco and D-I levels and won a national championship; and he scored, rebounded and was a star on UNLV teams that were known as much for defense as offense.

Forget what you saw of "Grandmama" after the back surgery. Larry Johnson the Runnin' Rebel should be in every Rushmore conversation. 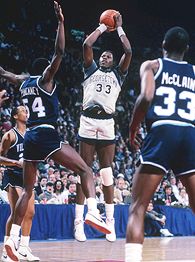 Next up is Patrick Ewing, the Hoya Destroya who led Georgetown to the national title game in three of his four years in college. In 1982, he and Michael Jordan were freshmen and Jordan hit the eventual winner (thanks, Fred Brown), but it was Ewing "making his presence known" by blocking shot after shot and even being called for five goaltending violations in the game. In fact, Ewing had, overall, a better college career than Jordan. He, too, won a title -- in 1984 -- and in 1985, it took arguably the greatest finals upset ever, by Villanova (in which the Wildcats missed only one shot in the second half), to beat his Hoyas.

Ewing so dominated college basketball that there continues to be a conspiracy theory in which David Stern and the NBA somehow rigged the first draft lottery so the New York Knicks could acquire Ewing. He scored more than 2,000 points, collected more than 1,300 rebounds and blocked 493 shots in four years of dominance. Although his teams fell just short in the pro ranks, they did not in college. Ewing -- the player, the image, the force -- belongs on Rushmore.

My final two Rushmore icons are maybe the most underrated players of their respective generations.

Ralph Sampson was the three-time college basketball player of the year, and he did it in the ACC, widely regarded in college basketball circles as the crown jewel of leagues, when the league (and college hoops) was full of stars. Bill Walton is the only other player who won the Naismith Award three times.

Sampson was quick and agile at a time when seven-footers were supposed to be plodders. Fans and scouts marveled at how a 7-foot-4 player could have such dexterity and ballhandling that had the grace of a wing player's.

Although Sampson never won a national title, it should be noted that the tournament was condensed at the time; he never was in a field of 64. Sampson had an injury-riddled NBA career, and he was labeled "soft" by some in the league, but in college, he simply was too big, too skilled and too athletic for the competition. 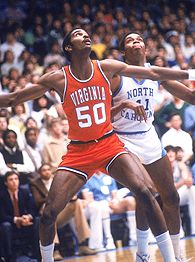 Simply put, he was a bad boy. He ran the floor and finished with ease; he had a soft, quick hook shot; and he had a faceup game in the midrange that was almost unguardable because of his ability to blow by you off the dribble.

Tisdale was far more dominant in his career in the Big Eight than Danny Manning, and even though he never won a title, or even got to a Final Four, Tisdale long has been recognized as the best ESPN-era player from the Big Eight/Big 12. With the caliber of schools involved in that designation, combined with his overall dominance over three consistent years, chisel Tisdale in on the mountain.

Yes, Christian Laettner was considered, as were Hurley, Grant Hill and Johnny Dawkins, but unlike those Dukies, these four men literally were feared by opponents.

The most difficult omission was Steve Alford, who, it should be said, is the best shooter of my generation. Although fundamentals are said to have disappeared from the game, the No. 1 fundamental always has been putting the ball in the basket, and Alford did that like no other. My list, however, is based upon dominance, and Alford was not the dominant force Sampson, Tisdale, Ewing and Johnson were. Although that might not be fair, that's the way I chose to focus my arguments.

Although there is no doubt college hoops' overall talent level has decreased as time has moved on, there have still been plenty of gems to watch these last 25-plus years. Consider all the great Tar Heels, UConn Huskies and Kentucky Wildcats who did not make the cut.

Those who have made it are engraved because of time served, memories left and awards plundered. Because of the lasting legacies they left.