Predicting what's going to happen with expansion in college sports over the next two months seems easy enough. 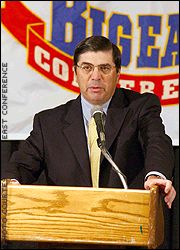 Louisville, Marquette, DePaul and Cincinnati are going to leave Conference USA for the Big East in 2005.

But that's about as close to a certainty as we have at this point. Miami and Virginia Tech will leave the Big East for the ACC next season. That much is for certain. Everything else that is going on with expansion -- and this could affect the Big East, Conference USA, the ACC, the Mountain West, the WAC, the MAC and the Atlantic 10 -- is speculative.

The conference commissioners met last week in Chicago and there certainly was plenty of above-board discussions. But there are also plenty of backroom talks with a few teams -- namely TCU, SMU, Tulsa, Rice, Houston and Tulane -- being fought over by Conference USA and the WAC.

But until the Big East makes a move, nothing will happen.

"We don't know how this will play out until the Big East makes its determination,'' MAC commissioner Rick Chryst said. "Until then, we're all guessing at some level. The commissioners are trying to talk through this but at some point it becomes a presidents deal.''

There are still plenty of ifs and lots of final decisions to be made at the presidential level.

The first steps should be made by Nov. 4, but it could come in late October or shortly after Election Day.

Among the potential scenarios: