Mike Montgomery is a man of integrity. His coaching ethics have never been called into question. His Stanford program is about as squeaky clean as any in the NCAA, if not the cleanest among high-profile conferences.

Billy Donovan hasn't been on the bench as long as Montgomery, but has earned just as much credibility. He works as hard as any coach in the country. It could be argued that Donovan is one of the hardest workers in the business, particularly when it comes to recruiting. And his Florida program has never received NCAA sanctions.

So, why is Donovan's reputation being questioned -- publicly no less? 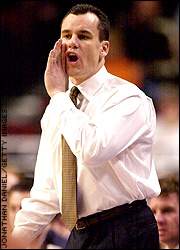 Well, the Gators' success since Donovan's arrival, his $1.7 million contract, his youthful exuberance and the fact that he's one of the most successful coaches ever under the age of 40, points to petty jealousy.

Who knows? But the bottom line is that the recent questioning of Donovan's integrity has to stop unless someone comes forth with, get this, some facts.

Nolan Richardson, Roy Williams, Eddie Fogler and now Montgomery have referenced Donovan and/or Florida, and unethical practices or downright cheating, in the same sentence since Donovan arrived seven years ago after a two-year stint at Marshall.

The most recent example of singling out Donovan came in a Washington Post story that quoted Montgomery as saying, "There's one coach we all know who cheats; everyone knows it. A few years ago, he made the Final Four. His president heard all the accusations, knew his graduation rate was awful and what did he do? He gave him a $1.7 million contract. What kind of message is that?"

Put Donovan's salary and Florida's 2000 appearance in the Final Four together and it was clear who Montgomery was alluding to in the story. And, it has to stop. Plenty of coaches love to say -- off the record -- that a coach cheats or is unethical. But rarely do they call out a coach in public. And the singling out of Donovan was simply wrong.

Montgomery is apologetic and realizes he never should have even mentioned or referenced the state of Florida in a conversation with John Feinstein, who wrote the story for the Post in advance of the National Association of Basketball Coaches' ethics and morals mandatory summit last week in Chicago.

Florida athletic director Jeremy Foley, perhaps today's best athletic director from a coach's perspective (he re-negotiates Donovan's deal nearly every year regardless of the finish), was right to challenge Montgomery. Foley called Montgomery asking for specifics. He wanted to know if there were issues with Donovan, and if so, he would follow through. But Montgomery had none.

"It never should have happened," Montgomery said. "The less said about it the better. It was unintended and not directed at anybody.

"I apologized to Billy. I told him that he shouldn't have to deal with this. I have no reason to believe there is anything wrong with his program."

Donovan arrived at the NABC meeting looking for his own explainations. Donovan was understandably upset, but a phone call from Foley calmed him down. Still, Donovan immediately told Montgomery that the two needed to talk after the meeting. During the conversation, Montgomery was stunned about the comments attributed to him and was taken aback by being confronted on the subject. But once he returned to California, Montgomery realized a formal apology was in order and did so with a letter to Donovan.

"I don't recall what was said, but I trust John (Feinstein)," Montgomery said. "I was dumbfounded when Billy came up to me."

Both coaches made it back to their respective campuses late Wednesday night after the summit. By Thursday afternoon, Donovan had received the fax from Montgomery. The two universities' athletic directors and presidents discussed the comments.

Now a week later, Donovan says he doesn't want to get into a public spat. He's put this latest attack behind him. But he is still frustrated at having to defend himself from ... exactly what? Even he doesn't know.

Coaches are making comments, but aren't following through with allegations. The only coach who took it a step further was Williams, who protested Florida's signing of Mike Miller, who was being sought after by Kansas as well. Williams' claims prompted a 10-month NCAA investigation into Donovan's recruiting tactics, which amounted to no violations.

"I think the only thing that came out of that was that John Pelphrey (a former assistant) was once at the wrong place at the wrong time, something minor like that," Donovan said. "All I know is that I bust my tail and work hard every day. I've got nothing to hide."

Since Montgomery's comments, Donovan has heard from his former college coach Rick Pitino of Louisville. Friends all over the country have called, as well, offering their support.

Donovan has had his share of big-time recruits leave this program. James White left prior to last season and will play for Cincinnati this season, while Mario Boggan departed the program last month for a destination to be determined. Neither squawked about any wrongdoing by Donovan.

Donovan simply coaches hard, demands excellence and has elevated Florida into an annual competitor with Kentucky for the top spot in the SEC. A year doesn't go by when the Gators aren't mentioned as a potential Final Four team.

At the same time, Montgomery and any sort of controversy comes as a shock. After all, it was Montgomery who was named the head of the NABC's ethics committee, in large part, because of what he stands for at Stanford.

"I don't have much choice where I'm at," Montgomery said. "I'm not put in many ethical dilemmas. I've always tried to do the right thing."

But, it's not as if Montgomery is comfortable sitting in judgment of coaches. He reiterated that the NCAA, not the NABC, will remain the jury of the coaching profession.

Does this mean the NABC's ethics committee still lacks teeth? Ultimately, the NABC can make recommendations about possible sanctions, such as not coaching USA Basketball or losing a coach of the year award. But it won't be able to actually deliver the penalty.

As for the Montgomery-Donovan soap opera, it's over. Montgomery learned a lesson other coaches should follow when it comes to alluding to another coach's wrongdoings. Unfortunately for Donovan, his colleagues in the business can't stop talking about him -- even though they haven't once produced proof of wrongdoing.

Maybe this mess will make Donovan's peers -- whether they like him or not -- think twice about what they say about him.

What else we're hearing
At the NCAA management council meeting ... Duke's trip to London during the 2002 Midnight Madness weekend prompted other schools to look at in-season foreign tours so they too could get 10 extra days of practice and take their newcomers with them abroad. Oklahoma, Arkansas, Marquette, Memphis, Tennessee, Notre Dame, Michigan, Portland, SMU, New Mexico and Old Dominion all took trips the past six weeks during a holiday weekend or a fall break. Well, these may be the last tours if legislation passes in January. The NCAA management council voted to add an amendment to the foreign tour legislation stating that schools cannot take a trip within 30 days of the start of fall practice. If this is passed in January, it could take effect for the 2004-05 season. But the good news for foreign trips is that this may be as far as the legislation goes. The original proposal called for the ending of all foreign trips in all sports. But there was too much support for non-revenue teams like Notre Dame softball or Holy Cross crew taking trips. So, the consensus was that men's basketball shouldn't ruin it for every other athlete. That's when this amendment was raised. All this means schools could still take trips during the summer and late spring. The rules of no missed class time stands. But trips like Oklahoma's and Arkansas' over Labor Day weekend would have been allowed under this rule since it was more than 30 days out from the start of practice Oct. 17. The management council didn't take any legislation action at the October meeting. They did discuss a number of proposals, like just having a 30-game season, regardless of exempted events, and doing away with all exhibition games that aren't against collegiate teams. But those will be voted on in January.

At Florida ... Who is the biggest surprise of the preseason? Chris Richard. That's right, one of the Gators' least-heralded recruits is ending up being a "can't miss guy." Donovan said the 6-8 freshman chases down every rebound and has the size and strength to make a difference. The frontcourt, which was considered soft a year ago, is turning out to be much more physical. Junior David Lee is bulked up, Christian Drejer is stronger in his second year, Richard and role players Adrian Moss and Bonell Colas give the Gators the deepest frontcourt in the SEC. Freshman Mohamed Abukar makes six legit frontcourt players, but Abukar has been slowed by a hip flexor injury.

At New Mexico State ... Aggies' assistant coach Tony Stubblefied reports that coach Lou Henson hasn't missed a step in practice. Henson, who is undergoing cancer treatments, scheduled the procedures before practice. His only absence was for Sun Belt media day. "He gets tired the day or two after the treatments, but he's still there," Stubblefield said. "We've never discussed it with the players because he hasn't really missed anything."

At Memphis ... Memphis athletic director R.C. Johnson said the school will pursue a home-and-home series with Cincinnati and Louisville in anticipation that both schools will leave for the Big East in 2005. "Our fans don't care if those games are conference or non-conference as long as we keep those rivalries," Johnson said. Johnson said Cincinnati athletic director Bob Goin has been receptive. He hasn't talked to Louisville yet, but doesn't anticipate a problem.

At Texas A&M ... Melvin Watkins is playing Antoine Wright at the point a fair amount, but he's convinced that JC transfer Bobby Leach and freshman Acie Law will be "big-time players." Watkins encourages Wright to bring the ball up off a rebound, or on the break, so he feels comfortable just going with the flow of the game. But the Aggies must have Leach or Law make an impact if they're going to make a run at a top-six finish in the Big 12 and NCAA bid.

At Oklahoma ... Coach Kelvin Sampson said all five of his newcomers will play, possibly significant minutes, meaning the learning curve is a bit slower in practice. Point guard Andrew Lavender (who will likely start), guards Jimmy Tobias, Lawrence McKenzie, Jaison Williams, and forward Brandon Foust are behind the "only five that understand what is going on." Add Larry Turner in the first group since Turner played sparingly a year ago. But Sampson is patient so far in the preseason, especially with Lavender, whose leadership draws Sampson's praise.

At Nebraska ... The Huskers are finally healthy. Jake Muhleisen, who broke his hip in January, isn't having issues in practice. And coach Barry Collier said senior center Andrew Drevo dropped 25 pounds to be more productive. Nebraska needs Muhleisen and Drevo to be an inside-out combination (as well as guard Nate Johnson) if the Huskers have a shot to move out of the bottom three in the Big 12.

Andy Katz is a senior writer at ESPN.com. His Weekly Word on college basketball is updated Fridays throughout the year.