Jason Conley isn't a typical mid-season transfer. Not because he led the country in scoring as a freshman two seasons ago, but rather because he's actually ready to accept a supporting role with his new team.

As the country catches up with what Conley has been doing in Columbia, Mo., we come to find out he didn't leave VMI midway through last season because he wanted more attention. And as he prepares to debut for Missouri this week, he certainly doesn't want to be a distraction. He simply wants to blend in. Something he certainly didn't do while averaging 29.3 points a game in 2001-02.

"This is new for me. To play with a whole bunch of talent," said Conley, who made a name for himself as a Keydet before deciding to leave VMI last December. "I've accepted my role. It's not scoring. I'll be the guy who comes in and shuts down the opposing star. That's my main focus. Everybody sees me as a scorer but I'm going to come out and shut people down.

Wait a minute. Defense? We are talking about the Jason Conley who seemingly outgrew the Southern Conference in less than two seasons, right? The same big-time scorer who tallied 30 or more points in 12 games as a freshman and torched Villanova for 38 points and combined for 49 more in games against Virginia and Kentucky? 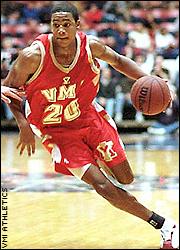 Yep, it sure sounds like the 6-foot-5, 210-pound junior would rather be a top defender. And it certainly seems as though Conley has bought into what Quin Snyder and the staff have been selling him while he redshirted the past two semesters. But, it remains to be seen if Conley's words are backed up by selfless actions.

At least Conley has the right attitude when it comes to a player joining a top-25 team midstream.

"If I play defense well, the offense will come," Conley said. "I'm real excited. Real pumped up to get out there and I don't think I'll freeze up because we've already got two All-Americans."

Yes, that might be the key to Conley's role. Missouri has the luxury of not needing Conley to come and dominate the offensive categories with the likes of Rickey Paulding, Arthur Johnson, Linas Kleiza and Jimmy McKinney running up the most numbers. Instead, Conley can come in and help lock up one of the top opposing perimeter scorers.

But, there is no doubt Conley can and will score plenty of points -- whether it was in the SoCon the past two seasons, or the next two seasons in the Big 12.

Snyder has been impressed in the way Conley doesn't hunt for his shot but still scores in the flow of the offense. And despite his gaudy numbers at VMI, Conley is grounded about what he can do for the Tigers.

Conley has been practicing every day as he prepares for Sunday's game against UNC Greensboro. He's sharpened his defense by matching up with Paulding. And along with JC transfer Randy Pulley, the pair will make the Tigers' deep bench that much longer.

Pulley could have played against Indiana and Gonzaga last week, once his eligibility issues were cleared up by the school and the NCAA. But Snyder chose to have Pulley and Conley join the action together, so the team wouldn't have to deal with more than one transition. Snyder also wasn't about to make the same mistake he admittedly made with Travon Bryant in 1997, when Bryant became eligible in time for the Illinois game and Snyder threw him out on the court where he struggled.

Pulley and Conley will have the Greensboro game under their belts before playing the Illini three nights later. Another difference between this year's midseason additions and Bryant's situation is that Pulley and Conley have been able to practice with the Tigers.

Snyder reiterated that Conley has been a part of the team the past 12 months. He also has Division I experience -- albeit at a low-major level. Synder isn't worried about the chemistry of this squad by adding two players who will command major minutes. The Tigers knew coming in that Conley would be one of the top perimeter players off the bench, while Pulley will likely be the top backup at the point to McKinney.

Like Missouri, Georgia Tech is already a team playing well and doesn't necessarily need to tinker with what's working so well. But the Yellow Jackets added former Arizona guard Will Bynum (six points, three assists in 18 minutes in Saturday's win over Saint Louis).

Yes, the Yellow Jackets were already loaded on the perimeter with B.J. Elder, Isma'il Muhammed and Jarrett Jack. But Bynum, a scoring guard, will certainly give the Yellow Jackets even more depth. He just has to accept his role and not come in and try to be a star.

The pressure is off him, just like it is for Conley and Pulley.

"Will has been great," Georgia Tech coach Paul Hewitt said. "He has watched us be successful and isn't doing anything dramatic. He just wants to fit in, and it has been great for Jarrett Jack for practice. He adds more ballhandling, better pressure on the ball, and he will free up B.J. Elder to be a big-time scorer.

"There is going to be a certain amount of rust. Will's handle wasn't as tight. It's a matter of getting back in game shape. He got winded at the end Saturday. Not sure if that's nerves."