Bob Knight and his Texas Tech staff began using their one call a week maximum to recruits on Thursday to let them know the Hall of Fame coach is home now. 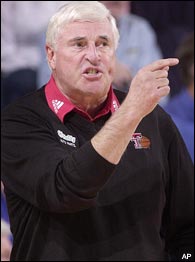 It's official: The flirtation with returning to his alma mater at Ohio State is over and Knight will finish his career in Lubbock, where he likely will become the all-time winningest coach in college basketball.

The finality came Thursday when Ohio State athletic director Andy Geiger spoke with Knight and told him the Buckeyes would be going in a different direction. Influential people in the basketball community, including Hall of Famers, had called on Knight's behalf and powerful Ohio State alumni wanted him to replace the fired Jim O'Brien. But Geiger wanted to go another way. And that was fine with Knight.

When O'Brien was fired on June 8, members of the Texas Tech staff began to wonder if they would be in Columbus before the start of the July 8 recruiting period. The Knights, Bob and assistant Pat, were on a fishing trip when O'Brien was fired. When they returned, they fielded numerous calls on the subject, including some from coaches looking for jobs at Ohio State, according to Pat Knight.

Members of the staff looked at a few tapes on Ohio State to see the Buckeyes' current players. After all, being prepared is part of coaching in Division I, and looking at the players at a school where there is a job opening is no different than studying a future opponent.

But as the days dragged on and the calls didn't come from Ohio State officials, the Knights knew that this process had to come to a head sooner than later. When the matter was finally resolved on Thursday, there was almost a sense of a relief in the basketball office.

"The more he thought about it, it was becoming less of an easy decision," Pat Knight said Friday morning on his way to a basketball camp in Lubbock. "Yes, Ohio State is his alma mater, but it would have been a hard decision. In Columbus, he would have been back in the media spotlight. Breaking the record will mean more to him here than it would at Ohio State because these people gave him a shot when he was down and out. They offered him a job when he was out for a year."

Texas Tech hired Knight three years ago after he was fired at Indiana. His teams have won 68 games in his three seasons in Lubbock, raising his career record to 832-322 in 38 seasons. Sometime in the next two-plus seasons, Knight should pass Dean Smith's record of 879 wins. And while breaking the record in West Texas sounded odd three seasons ago, it seems right now.

"We're glad this is over," said Pat Knight, who said the staff fielded nervous calls from present players and the families of incoming players about the situation. "The reason we didn't call our recruits until Thursday was we knew what the first question would be and we didn't have an answer. Now that it is, we haven't missed a beat and we'll be right back at it."

This weekend, the Raiders are expecting an unofficial visit from a prospect and they're hoping to start securing more commitments for this recruiting class and beyond.

Texas Tech, which lost to Saint Joseph's by five in the second round of the NCAA Tournament, has four commitments in the class of 2005, all from high school -- not junior college -- players, according to Insiders.com. The same site says that the class of 2004 includes three high school signees.

The Red Raiders had to lean on JC players early under Knight, but now can go to the high school ranks, a sign that the program has roots.

"We had to patch things up right away and the JCs have been great for us," said Pat Knight. "Getting the high school players is great for us for them to learn our motion system. Our best teams here will be the next two three years because our kids have been around now."

Knight has done a tremendous job of making the Red Raiders relevant again, and not just because of his presence on the bench.

Texas Tech went to the NCAAs in two of the last three seasons under Knight, whose presence has changed the Big 12. The Red Raiders have had tremendous games with Oklahoma, Oklahoma State and Texas, with Knight making those into some of the best rivalry games in the conference. The league's depth has improved and there is more interest and television exposure in the Big 12 because of Knight.

The Red Raiders will lose one of the best scorers in the Big 12 in Andre Emmett. The scoring guard, who averaged 20.6 points as a senior, was drafted No. 35 by Seattle and subsequently traded to Memphis late Thursday night.

"We could have five guys average in double figures next season," Pat Knight said. "We'll have more of a balanced offense. We'll be quick defensively, too."

Once again, the schedule will be favorable, with plenty of home games and the only high-profile non-conference games coming against Ohio State in Dallas and Iowa in Chicago.

If Ohio State had approached him with a can't-refuse offer and Knight had gone to the Buckeyes, it would have been a storyline for college hoops all next season -- Knight back in the Big Ten ... Knight returns to Indiana ...

Instead, he will remain a story, at Texas Tech, where he has settled in for the final years of his career. But he's not going out quietly. He's finishing his career with the same passion for the profession that he had nearly four decades earlier.

Texas Tech was the winner Thursday when Geiger called. Ultimately, this could be a win-win for both parties if the Buckeyes make the right hire in the coming weeks.

Andy Katz is a senior writer at ESPN.com. His Weekly Word on college basketball is updated Fridays throughout the year. The Weekly Word will return on Friday, July 9.