Rick Majerus is nomadic again, but this time only for a few months.

"I finally won't have to answer, 'how long are you going to stay there?' because this is it," Majerus told ESPN.com Wednesday morning prior to being introduced as the next coach at USC. "It's not like I'm going to try and do a good job here to get the Syracuse job." 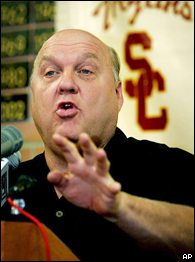 Majerus is hanging around at a hotel in Los Angeles for a few days, getting in his daily swim at Loyola Marymount before heading over to USC to meet the media. Two nights earlier, he was in Philadelphia working what ended up being his final game as an ESPN analyst during the Wake Forest-Temple broadcast.

Majerus won't take over USC until April 1. Majerus also intends to find a home, actually buy a place in the L.A. area. He made a purchase in Milwaukee to be near his mother, but it wasn't ready yet so he still has never lived in the house, choosing to live in a downtown Milwaukee hotel while working the past month for ESPN.

Why is his lodging news? Because Majerus never put down roots at Utah, choosing to stay in a hotel for 15 years. He wants to make USC, and ultimately the L.A. area, his home for the immediate future. At 56, that's saying something for Majerus.

"If it all possible, by April 1, I want to have a home here so I can have the kids [the players] over to the house," Majerus said. "This is the only job I would leave ESPN for. I wouldn't have left if it were for another job. I thought I might want to go back in a couple of years but then this opened."

USC fired Henry Bibby last week four games into the season. Saia will remain head coach for the rest of the season, essentially getting a chance to audition to other athletic directors.

Athletic director Mike Garrett said: "This is an amazing day
for the USC men's basketball program. Rick Majerus is one of
America's great coaches and he is one of the sport's true
personalities."

Majerus will meet with the coaches and players, especially the four non-seniors on the roster, then he intends to hit the road.

"I'm going to hang out with NBA guys, watch some practices, and then go watch some college guys that I respect work," Majerus said. "I'll get into top shape and buy that house. I know I'm going to get frustrated and have to be patient. The next 100 days are critical but it is what it is and they [USC] wanted to do it this way."

Majerus would have rather stayed at ESPN for the rest of this season, but the network saw that as a conflict of interest and the two parties agreed on a negotiated settlement. The NCAA wouldn't have looked too kindly on Majerus being on-air while the pending coach at USC, either.

According to the NCAA, Majerus couldn't be on the air recruiting prospective student athletes and would be subject to the publicity rule where he would have to itemize outside athletically related income.

Majerus likely wouldn't have recruited on air, but it would have forced the NCAA to monitor the situation. Majerus won't take over as head coach until April 1. But USC athletic director Mike Garrett announced at Wednesday's news conference that Majerus would be classified as the third assistant (taking Saia's place) so he could recruit. Garrett said this was cleared with the USC compliance office. Majerus would fall under the same recruiting rules as any other coach in the country. Presently, coaches can go out for 40 days from Nov. 18 to mid-March. Majerus won't assist the team in practice or games.

"I'll do everything that I can do and won't do anything I can't do,'' Majerus said.

He said he hasn't talked to any coaches about being assistants but expects to field calls on the subject in the coming months.

Majerus said he doesn't want to look over Saia's shoulder during the season. He said he wants the six seniors on the team to enjoy their final year and have a good experience. He said he would tell them that, "I'm not your coach."

"I realize there will be a great deal of frustration and I'll have to learn to deal with it," Majerus said of a roster that might have only four returning players next year. "I want to keep every guy on the roster. I hope they stay. But we might have to play with walk-ons next year. I told him [AD Mike Garrett] that you're in for a rough go. We'll take our lumps."

Majerus said USC asked for and went over his medical records after his well-documented health concerns over his heart. He had a few heart procedures during his tenure at Utah and left the Utes last January because of chest pains.

"My health is good," Majerus said. "They checked everything out. If in two years I can't coach because of my health, then that would be that. But I don't anticipate that. It'll be at least four years to get it really going."

The expectation is that he will turn USC into a national player sooner than later. USC has been billed as a sleeping giant, even though it made the Elite Eight in 2001. But this is the perfect time to enter the Pac-10.

The league is down. Arizona coach Lute Olson is 70. While he's still on top of his game and has oodles of talent, he's closer to retiring than starting up. Mike Montgomery has left Stanford for the NBA and left a rebuilding project in his wake. UCLA is in the middle of rebuilding under Ben Howland, who at one point was Majerus' good friend. The two aren't enemies, they simply don't talk anymore for reasons no one can explain. That's sure to fuel the rivalry.

"There will be a lot recruiting battling going on down there," Oregon's Ernie Kent said. "There might be some mudslinging going on when they go head-to-head. Having Rick at USC will be good for the conference because he does a heck of a tremendous job."

Majerus has a great shot to battle UCLA for L.A. supremacy. With a new on-campus arena coming in 2006-07, he'll have a real homecourt instead of the outdated L.A. Sports Arena.

"I respect Ben as a very good coach," Majerus said. "I hope it becomes a rivalry, but right now they hold the upper hand. Even if we were the best of friends, there would be a different relationship now. It's two games on the schedule, just like BYU was for Utah. I never got caught up in that stuff."

Arizona State coach Rob Evans said Majerus adds even more credibility to the cradle of Pac-10 coaches. Majerus has been to the NCAA title game in 1998 with Utah, which is more than anyone but Olson in the league can say at this juncture.

"The arena really will help them recruit," Evans said. "Rick is a high-profile name and that will help. But it's L.A. and like here in Phoenix, you've got to get them in the arena. Rick's got the possibility of doing that. It is a sleeping giant [job]."

Majerus said he doesn't see why USC can't be a national power when he looks at other football-dominated schools like Michigan, Texas and Florida. He said he loves the academic reputation of the school, especially since he has had a number of academic All-Americans.

And for the first time in a place that he actually plans on calling home.

The Associated Press contributed to this report
Andy Katz is a senior writer at ESPN.com.