WINSTON-SALEM, N.C. -- Justin Gray woke up around midnight Friday night after a three-hour nap and found his roommate Chris Paul up, unable to sleep.

Paul had just gotten up himself after the two went to bed early following practice and a stop to hand out pizzas to the students camping outside the Lawrence Joel Coliseum. 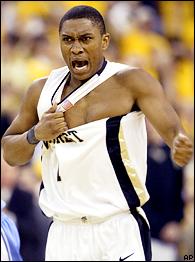 Neither Gray nor Paul could relax and doze off easily. They watched anything that was on television, something to get their minds off Saturday's showdown with North Carolina.

But they couldn't. The game was too consuming.

''We just kept talking about how much we would dream to watch a game like this,'' Gray said of the 210th meeting between the two schools, the first in which both teams were ranked in the top five (No. 3 for Wake and No. 4 for UNC). ''This is one of those games where you wouldn't want to do anything but order pizza and watch the game.

''We were blessed to play in it so we were like if you cannot get up for this game then you shouldn't even come into the locker room,'' Gray said.

Wake Forest coach Skip Prosser would like you to believe that the players didn't treat this matchup any differently, even though it was the only scheduled regular-season meeting.

That's the safe thing to say. The reality is that these are college kids in an information age who watch television, read the newspapers and, of course, the Web about college basketball.

Paul, Gray and everyone else associated with the Demon Deacons understood how important this game was to them and to the Wake Forest community at large.

''We kept talking about how much this win was going to mean to us,'' said Paul of their late-night conversation Friday night/early Saturday morning.

''I felt like a lot of people were doubting us coming into the game,'' said Paul, who put himself atop the leaderboard for player of the year with a 26-point, eight-assist, five-steal, one-turnover, six-rebound (9 of 9 from the line) performance in 34 minutes. Paul's mark at the line contributed to a Wake Forest and ACC record 32 of 32 at the free-throw line, two short of tying the NCAA record in a game. Not bad for a team that was shooting 65 percent at the free-throw line in the previous three ACC games (UNC wasn't bad either with a 21 of 26 performance).

We're not sure who had doubts about Wake Forest.

Yes, this is the same Wake Forest team that got waxed at Illinois. But it's also the Wake Forest that beat George Washington, Providence and Arizona in New York, Temple and New Mexico on the road, Texas at home, and a blistering start to the ACC with wins over Clemson and Virginia on the road and against Maryland.

Wake Forest's 95-82 win Saturday afternoon in front of a crazed Joel Coliseum crowd that rivaled any of its ACC brethren (which says something for how far the Deacs have come) quickly extinguished any Tar Heel thoughts of a runaway in the ACC.

That idea wasn't farfetched after the Tar Heels made Maryland and Georgia Tech look second tier in two home wins in the past week.

''It's Carolina and whether you play them two times, three times or one time, it's still Carolina,'' Prosser said.

And for Wake, which has an ingrained inferiority complex with North Carolina and Duke, this win signifies that the Demon Deacons are just as serious a threat to win the ACC and the national title.

Remember, the Deacs were the preseason choice to win the title among a number of national outlets, including ESPN.com. North Carolina was the choice of nearly just as many.

The game didn't indicate that there is much difference between the two schools.

''We match up very well with our big three [Sean May, Rashad McCants and Raymond Felton] and their big three [Paul, Gray and Eric Williams]'' May said.

''We faced a team that is very similar to us,'' said the Tar Heels' Melvin Scott.

Paul outplayed Felton (1-for-7 on 3s), but May was quick to defend his point guard by saying the big men didn't do enough to help him defensively. McCants was in foul trouble throughout the game, picking up three first-half fouls for just two points (on free throws). McCants picked up a fourth foul in the second half, a minute into the second half. He found a way to maximize his minutes, still finishing with a team-high 19 points, on 8 of 12 shooting, in just 20 minutes of play.

''We need to muster up scoring without Rashad,'' Scott said.

''We missed his presence,'' May said.

Senior Jawad Williams had a quiet 12 points while freshman Marvin Williams popped in 15 off the bench.

''We're similar in about every position,'' Paul said.

But they won't play again the rest of the regular season. That's why this was such a dream matchup for Wake. Both teams talked after the game about how much they'd love to get another shot at each other.

Even though the Demon Deacons would own a tiebreaker with Carolina if Wake were to lose another game, Paul and Co. still want another shot.

''I would love to play them at Carolina,'' Paul said. A year ago, the two teams played a triple-overtime game at the Smith Center. ''I know they feel the same way. It's not right to beat them once and not get a rematch.''

Remember, this is from the winner.

''We wish we had another shot but that's not the way the schedule is set up,'' May said. ''We don't like it. We took one on the chin but we've got a lot of games left.''

Undefeated Duke could be the spoiler for both, since they still get North Carolina and Wake Forest in home-and-home.

But the Demon Deacons have a more challenging schedule forthcoming with three straight road games, at Florida State, at Cincinnati in a nonconference game and at Georgia Tech, which could have its top scoring wing in B.J. Elder back for that game on Jan. 27. Elder injured his hamstring against Kansas on New Year's Day and hasn't played in an ACC game yet this season. North Carolina plays at Clemson, hosts Miami and is at Virginia over the next three.

''I'm really concerned about the Florida State trip,'' Wake Forest associate head coach Dino Gaudio said. ''A year ago we beat North Carolina and everyone was telling us how good we were and we didn't get better for a couple of weeks. Florida State beat us down there last year.''

But this Wake Forest team is a lot more mature than a year ago, just like North Carolina.

So, if North Carolina and Wake Forest are so evenly matched, then who should be No. 1? Illinois or Kansas, or should it be one of these two teams?

''Illinois,'' said Paul of the Illini team that handed Wake Forest its only loss of the season on Dec. 1 in a 91-73 game that wasn't even that close. ''They're undefeated so they can stay right where they are.''

All these two teams care about is winning the ACC and a No. 1 seed in the NCAA Tournament. They'll gladly let the Illini, and/or Kansas, take the heat of being a top team in the polls.