MADISON, Wis. -- Bruce Weber almost bit on the schedule and opened up to his players about what he was really thinking. Three straight Big Ten Tuesdays on the road was going to be a bear.

But Weber checked himself. The Illinois coach didn't want his players overcome by the sheer difficulty of playing at Wisconsin on Tuesday, playing at Michigan State next Tuesday, and then visiting Michigan on Feb. 8.

"I thought maybe I should bring it up," Weber said, "but I didn't. I knew they were focused on what we had to do. Last week, I cut the media out because [the attention] had become so overwhelming. It was starting to wear us down mentally. I cut practice down so we could be fresh."

Weber didn't have to overemphasize this three-game stretch. The players know what they're up against if they're going to remain No. 1, challenge for an undefeated regular season just like Saint Joseph's did a year ago, and win the Big Ten.

Weber's silence on the subject didn't matter to the Illini.

"We circled this game early in the season," Illinois junior guard Deron Williams said. "We circled the Michigan State game, too." 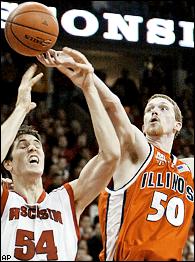 The Illini know that the Badgers and Spartans wanted to be the first team to knock them off. But Illinois equally coveted the opportunity to stick it to both teams itching to take back the headlines.

First one down is Wisconsin. The 20-0 Illini snapped the Badgers' 38-game home-court winning streak with a 75-65 victory at the Kohl Center.

Before the Illini head for East Lansing, Mich., Minnesota likely will be Gopher meat when the Illini celebrate 100 years of basketball Saturday. Alumni from the great Illinois teams are coming to Champaign and Lou Henson, the former Illini coach and recently retired New Mexico State coach, is expected to attend, too.

"We've got a big week coming up with the 100th anniversary and then getting on a plane to go to Michigan State," Weber said. "But our guys are having fun and I'm enjoying it, too."

The Illini appeared vulnerable last week in their overtime victory over Iowa at home. Forget about Illinois being better off losing once, or more, before the NCAA Tournament. Weber had his talking points about preparation with the OT win.

"It was great to learn a lesson without failure," Weber said.

The Illini didn't talk about it outright, but they knew they needed another player other than a guard named Dee Brown, Deron Williams or Luther Head to emerge at Wisconsin. Depth has been an ongoing source of conversation because there was little chance guards Brown, Williams and Head would be able to carry the Illini every time out. Frontcourt starters Roger Powell and James Augustine have performed admirably, but the knock has always been that there is a void on Illinois' bench.

That might not be an issue anymore. Welcome Jack Ingram to the national stage. No Illinois player needed a breakout game more than Ingram, who's been burned badly by coaching changes.

Ingram transferred to Illinois to play for Self and at least got a chance to practice for him during his red-shirt year. But then Self left the Illini to replace Roy Williams at Kansas, saddling Ingram with another coach, this time Weber.

"When I got the job his mom called me and said, 'Please stay for two years, my son has never had a coach for two years,' " Weber said. "It's been hard for him. He thought it would come real fast. He struggled."

Weber had to sit Ingram down last season in order to reach him. Ingram didn't pout. He stayed with the program, hoping and believing that his day on the court would come. Tuesday was that day.

Ingram stuck two 3-pointers to push Illinois from down three to ahead three (61-58) on consecutive possessions with 7:41 remaining in the second half. He then converted two key free throws to give Illinois a 65-64 lead with 3:39 left.

Ingram made only two 3-pointers this season prior to Tuesday's game. One came last week against Iowa. He had only attempted a total of seven in 19 games.

"My role isn't to be a 3-point shooter," Ingram said. "When I hit that shot against Iowa, it got me thinking. The first time I hit the 3-pointer [against Wisconsin] I got the ball nice and clean. The second time I knew it was going in, too."

Ingram also tied up the Badgers' Mike Wilkinson, frustrating him down the stretch.

"I've been feeling more and more confident since about the fourth or fifth game this season," said Ingram, who averages just 4.4 points a game but scored eight off the bench Tuesday.

"I knew if I got the opportunity I would step up," Ingram said.

You could tell Ingram was overwhelmed with joy that he was one of the featured Illini to stand in front of the media after Tuesday's win. He waited five years for such a moment and when he had the opening, he didn't miss his chance.

"Jack makes us that much more dangerous," Williams said.

"We've got Augustine who can run, Powell who can be explosive, and Jack and Nick give us different looks because they can shoot the ball," Weber said. "It makes us very difficult to guard. Tonight he got his chance to shine. Everyone loves to talk about Dee, Deron and Luther knocking down 3s, but Jack had a night that no doubt will be in his memory bank."

Without Ingram, the Illini might not have snapped the Badgers' home streak. Without Ingram, going undefeated might not be possible. This team is evolving at this stage, finding out it has hidden talent deep on its bench -- from a fifth-year senior no less.

"We knew if we could get a win here, we would have a leg up for the Big Ten championship," Ingram said.

The next test is Michigan State. Michigan on the road the following Tuesday shouldn't be a problem. Beating Iowa in Iowa City on Feb. 19 could be the last hurdle to a perfect regular season.

And then, who knows?

"We're not changing our routine," Weber said. "We're having fun with this."