LEXINGTON, Ky. — South Carolina exposed Kentucky a bit, forcing the Wildcats to shoot 26 percent on 3-pointers in a 12-point loss in Columbia on Tuesday night — the Wildcats' first conference loss of the season.

Oh boy. Probably didn't want to get Kentucky mad in the SEC.

It doesn't happen too often.

Kentucky's dominance in the SEC has been absolutely remarkable in the past five seasons. The Wildcats have gone 61-14 in league play since 2000-01 — 71-15 if you include SEC tournament games. That's a 10-game difference in the regular-season win column versus second-place Florida (16 counting tourney games). The past three seasons are even more impressive; UK is 45-4.

The only other conference where a team has enjoyed comparable dominance is the Big 12, where Kansas has won 64 games to Oklahoma State's 53 in the same nearly five-year period.

"They are the kingpin," Alabama coach Mark Gottfried said. "If you want to win the league, you've got to win it going through Lexington. Kentucky has set the standard."

Why is Kentucky so dominant in the SEC?

We didn't need to ask Kentucky because we know the 'Cats won't talk about themselves. So we asked their competitors, who revere this program almost as much as Big Blue Nation.

Sure, they love to hate Kentucky, but they respect the Wildcats more than any other program in the country. Without Kentucky, the SEC simply wouldn't be the SEC. There would be no marquee program, no fat television contract, no national respect year in and year out.

But how do the Wildcats do it every year?

"I can't explain it," Stallings said. "They cause everyone in the league to be blue. I think they look at the rest of us like we're just fodder. It's a pretty damn good league every year, and every year we all say Kentucky can't be as good as last year. And they are."

Stallings said beating the 'Cats isn't about matching up with their players. Rather, he said, it becomes a mental showdown.

"That mentality kicks in when they need it," Stallings said. "I don't think you can quantify it. It's something that exists and they believe that they're supposed to win, conditioned to win — and when they don't, everyone is surprised. We beat them last year in Nashville, the last time they lost [in the league] before Tuesday night, and after we beat them, everybody walked out of the building saying, 'Damn, Kentucky just got beat.'"

Tubby Smith
Smith won a national title in 1998, his first season in Lexington. For whatever reason, he doesn't always get mentioned as one of the greatest coaches in the country.

Apparently, his SEC colleagues think he should be at the top of the list.

"His teams play hard all of the time," LSU coach John Brady said. "He's not real flashy or tricky at either end of the court. They play hard and he holds them accountable for that."

Smith has always been unafraid to take a stance, play a game of chicken and see if the player will balk.

Freshman Joe Crawford wanted to transfer, left school for a few days and was heading back to his native Michigan. But Smith wouldn't buckle on the national letter-of-intent rule that binds a freshman to a school for a year. If the player breaks the contract, he is subject to losing a year of eligibility. Smith didn't back down. Crawford did and returned to Kentucky.

"They do it his way or they're sitting their tail at the end of the bench," Stallings said. "That's what I love about him. He doesn't take any crap. He's good, but X-and-O-wise it's not anything special. It's not about X's and O's, it's about toughness and competitiveness, and they always have a championship mentality."

Smith has done a great job of asserting control over his team by removing the Big Man on Campus mentality of today's young players.

"He has taken away the egos and made guys prove themselves," Florida coach Billy Donovan said.

Gottfried went a step further and said Smith is the "most underappreciated coach in America."

Recruiting
Kentucky fans are among the most passionate in the country. Recruiting is the lifeblood of every program, and Kentucky fans love to know who the Wildcats are recruiting and what honors are attached to the names. 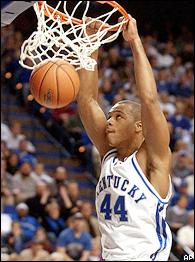 Smith doesn't care. He has never been about landing a laundry list of McDonald's All-Americans. Sure, he does get his share and scored big-time last year with a freshmen class of Rajon Rondo (who could be the national freshman of the year), Randolph Morris, Ramel Bradley and Crawford.

But Smith is more apt to go after a player like senior Chuck Hayes, who wasn't much of a headline guy yet is currently the active leader among players nationwide in total wins, with a scalding 84-15 record (.848) in his three-plus seasons.

"Tubby was ahead of his time and was actually recruiting better than everybody," Donovan said. "The perception was that Kentucky didn't have very good players, but Kentucky always has the right mix of young kids and kids he can rely on."

Donovan cited his own star players who didn't last.

"Our highest-profile players were Mike Miller, Donnell Harvey, James White and Kwame Brown. And out of those four guys, we've had a total of four years from them. White transferred [to Cincinnati] after one year, Harvey went to the NBA after one, Miller played two before the NBA and Brown never showed up."

While schools like Florida, Michigan State and Arizona were losing early-entry players to the NBA, Donovan said Kentucky had a core group of players who were moving along: Tayshaun Prince, Keith Bogans, Erik Daniels, Gerald Fitch, Cliff Hawkins and now Kelenna Azubuike and Hayes.

"He manages to get guys to stay four years, and they're usually tough, passionate," Donovan said. "Look at the home-court advantage he has at Rupp [Arena] to go with his system. That's how he maintains a high level."

Kentucky has led the nation in home attendance the past nine seasons.

Mississippi State has nipped on Kentucky's heels in the SEC, winning the conference tournament during this five-year run and winning the SEC West title the past two seasons. Yet coach Rick Stansbury is 1-6 against the Wildcats, who will host Stansbury and his Bulldogs on Saturday night (ESPN, 9 p.m. ET).

"Kentucky is always the school to measure up against in this league," Stansbury said. "I think we've become their rival in the SEC since we won the tournament and they beat us in the finals once. But I'm not sure if that's good or bad."

It's hard for anyone to be Kentucky's rival in the SEC. The reality is, much like Duke and North Carolina in the ACC, every SEC team would love to be considered Kentucky's rival because that might mean they're good enough to beat them.

That hasn't happened too often in the SEC.