This isn't the way he thought he would be leaving Purdue after 25 seasons. The Boilermakers are 7-17 overall, 3-10 in the Big Ten, and fresh off a season sweep by in-state rival Indiana Tuesday night.

Purdue's home schedule ends Saturday against Minnesota and then the Boilermakers finish at undefeated and top-ranked Illinois and Wisconsin.

Not even two Tylenol could alleviate that headache.

"This hasn't been fun," Keady said. "I've been appreciative of all the gifts, but this is ridiculous."

Keady's biggest complaint deals with his team's effort and, at times, the players' lack of development over the course of this season and the past two.

He said nobody is pouting or down, but that doesn't take away his bitterness toward the way his stellar Purdue career is ending.

Keady flirted with leaving for the University of San Francisco last spring after Purdue wouldn't give him an extension. He stayed once the school hired Matt Painter, his former player and then first-year Southern Illinois coach, as his assistant and head coach designate for this season. But Keady still had hopes that the Boilermakers could ride him to the NCAA Tournament one last time.

Keady probably wasn't talking about juco transfer Carl Landry, who averages a Big Ten-leading 19.0 points per game (along with 7.3 rebounds an outing). He's been to the free-throw line a team-high 193 times.

"Without him, we wouldn't have won a game," Keady said.

Still, Keady doesn't have an overall answer for the team's stunted development.

"Not knowing why kids didn't get better in our program [bothers me]. That was always our staple. Every year, players got better. I blame me. It's kind of like a punching boxer who doesn't know when to say 'I give.' "

What did Keady expect? He truly believed he could ride this out to an NCAA Tournament.

"If I had gotten in last year, I would have retired," said Keady, who missed one game this season with the flu. "I wanted to stay and finish, but this is ridiculous. [Now the dream scenario would be] to win the Big Ten tournament and go to the NCAA Tournament with a losing record. That would be fun."

Injuries hurt this squad early. David Teague, the team's second-leading scorer, missed the first two games with a broken hand. Starting center Matt Kiefer missed two games with a torn meniscus in his right knee and guard Bryant Dillon tore the patella tendon in his right knee and was lost for the season after 15 games. Dillon was one of two reliable ball handlers, leaving Brandon McKnight all alone to handle ball pressure.

Despite that, Painter said the lack of effort by some players is what really has Keady down.

"That's what really frustrates him," Painter said. "We're shorthanded, playing with two walk-ons and a football player. I knew we didn't have the talent that we've had here before. Coach is a competitor and he believes in his players and will take on any challenge, no matter the odds.

"He felt good about this year and was going to ride this out because he thought we could win," Painter said. "He's hanging in there and trying to find a way." 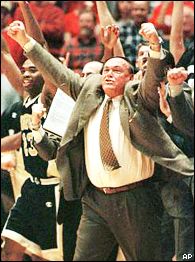 Keady said he wanted to protect the Purdue basketball family by hiring Painter, but didn't want to leave the program like this, saying, "this is weak and we've got to get this thing turned around here."

Keady expects Painter to turn around Purdue, saying he loves his teaching and enthusiasm for coaching. He said the players listen to him and will get his full support. But Keady doesn't want his own career to end on a sour note. He's not saying he would coach again, but he's not closing the door, either.

"If they're interested in me and it's a good pay scale and good weather then I'll listen," Keady said. "I'm not soliciting it but I'll talk."

Keady said his contract ends on July 1 and he will honor that by doing speaking engagements for the university after the season. But first, his Purdue regular-season career will end with a rough bus trip.

"Our schedule couldn't have been worse for our team," Keady said. "We played Memphis, Oklahoma, NC State and then Baylor upset us. The Big Ten schedule gave us the tougher teams early and then we end at Illinois and Wisconsin. After all of the years we kicked butt, they're getting even."

Keady said he woke up at 5 a.m. Wednesday thinking about what defense he should run. That kind of sleepless night should end soon, as will his illustrious and celebrated Purdue career in a manner he never envisioned -- at the bottom of the Big Ten.