Which two ACC teams are the biggest beneficiaries of all these recent defections to the NBA?

Duke's definitely one. And, believe it or not, Boston College.

The ACC is in the process of taking a massive hit from NBA draft early entries, and that clearly benefits the Blue Devils and Eagles, both of whom are expected to return talented and heavily-upperclass lineups.

Wake Forest? Already down its best player after sophomore Chris Paul declared Thursday. Forward Eric Williams is expected to test the draft process, too. If he leaves, it would gut the Demon Deacons of their point guard and center for next season.

Maryland should be strong with four returning starters, but while John Gilchrist and Gary Williams didn't always agree on approach, Gilchrist still was one of the Terps' top scorers and its lead guard. Now he's gone.

Georgia Tech is waiting for Jarrett Jack to make up his mind. But the Yellow Jackets already have lost seniors Will Bynum, B.J. Elder, Luke Schenscher and Is'mail Muhammad.

N.C. State isn't losing any underclassmen, but its best player, do-it-all Julius Hodge, is a senior.

Miami, Virginia Tech and Clemson will still be solid and are potential NCAA teams, but that doesn't exactly stand up and scream "ACC champ." 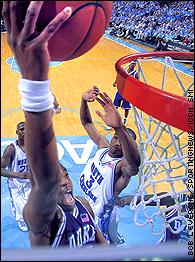 No, this race could be decided early.

Duke loses Daniel Ewing and Reggie Love. That's it. Even walk-on center Patrick Johnson, listed as a senior athletically, actually has one more season left because he didn't start playing until he was a sophomore.

The Blue Devils return arguably two of the top players at their respective positions in shooting guard J.J. Redick and center Shelden Williams. Duke assistant Chris Collins said Thursday that Williams is still investigating declaring for the draft, but they believe he is coming back.

The other returnees are all important cogs in this machine  shooting forward Lee Melchionni, guard DeMarcus Nelson, point Sean Dockery, forward Shavlik Randolph and forward David McClure. And, we're not sure if you were watching any of the high school all-star games the past two weeks, but if you did, you couldn't miss seeing a Duke newcomer somewhere on the floor.

The Blue Devils add two potential candidates for national freshman of the year in point Greg Paulus and power forward Josh McRoberts. The staff also believes it got a steal in shooting guard Martynas Pocius, who could come in and be a spot shooter off the bench to back up Redick. Those three are expected to be significant contributors next season. The Blue Devils also added forwards Eric Boateng and Jamal Boykin.

"We should be right there, right in it," Collins said of the national title race, not the ACC championship quest. "We feel we'll have two of the best players at their position, and a really good team coming back. We've also got freshmen who can come in and play."

The Eagles, who are leaving the Big East, should jump to the top of the ACC, behind Duke, if they can escape the NBA bug, too.

Junior Craig Smith isn't expected to declare. Neither is sophomore Jared Dudley. These two combined for one of the most productive scoring forward tamdems in the country this season. The Eagles also return Sean Marshall, Louis Hinnant and Sean Williams. That's five of their top seven scorers, including the top two in Smith (18.0 ppg) and Dudley (16.5).

The only two players the Eagles are losing were role players  center Nate Doornekamp and guard Jermaine Watson.

BC left the Big East with a share of the conference title. The Eagles could enter the ACC as the favorite to finish second, making the transition incredibly smooth. The Blue Devils and Eagles are slated to play only once next season  possibly even more good news for both.

Andy Katz is a senior writer for ESPN.com. His column will return the week of April 25.