TEANECK, N.J. -- A handful of NBA scouts were scattered around the bleachers at Fairleigh Dickinson University watching the games Thursday night. 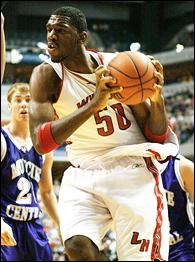 All of these NBA personnel had plenty of up-close access to the high school players, or at the very least, equal evaluation time as the college coaches.

All of this could change next year under the new collective bargaining agreement agreed to last month and being formalized sometime this month.

NBA commissioner David Stern wants scouts, GMs, et al., out of high school gyms. To do this, he got the players union to agree to a new age minimum for the NBA draft, 19 years old and one year out of high school. NBA spokesperson Tim Frank said the league is still finalizing details of what NBA personnel can and cannot do in terms of evaluating talent.

NBA personnel are expecting that high school regular-season games would be off limits. But a number of them have told ESPN.com they should be able to evaluate during the summer camps, at the very least.

Jazz director of player personnel Walt Perrin said NBA teams need more than just one year, whether it's in college, junior college or prep school, to evaluate a player. They want a growth chart of the player's progress.

"I'm not going to fight their edicts, but it's silly and dumb," said Sonny Vaccaro, the godfather of grass roots basketball who runs the Reebok camps. "I would want them here more. I think the summer time and camps are different than going to high school gyms. Keep them out of the high schools, or even the McDonald's game, but they'll be limiting themselves as to the quality of athlete they'll get."

Perrin said there could be more mistakes without more evaluation time, something that college coaches have been saying for years when their time for watching players was cut short.

But there are two reasons cutting off NBA personnel from high school players might not make sense: They might get them in one year anyway and the NBDL.

Vaccaro is convinced the true effect of the new minimum-age rule will be felt within three years. He said, and he's not the only one here, that a number of players will leave college after next season because of the vacuum in the NBA draft created by this new rule that will send the elite in the class of 2006, like top player Lawrence North (Ind.) High center Greg Oden to college (he committed to Ohio State last week).

"Next year, Rudy Gay [a sophomore at Connecticut] will be gone," Vaccaro predicted. "He could be the No. 1 pick. David Stern will give the next team five minutes and by pick 15 he'll be turning it over to Russ Granik (who usually handles the second round) because there will be nobody left. They should eliminate the second round.

"All these kids are getting out next year," Vaccaro said of the elite underclassmen. The 2006 lottery class could include players like Gay, Gonzaga junior Adam Morrison and Texas sophomore Daniel Gibson.

Vaccaro said that after the first group of players leaves in 2006, the rising high school seniors, who would complete their freshman season in 2007, will then all leave. He said the trend will continue with North College Hill High (Cincinnati) O.J. Mayo's class in 2007, leaving after one year in 2008.

"You'll have more one-and-outs than ever before in history," Vaccaro said. "You're delaying the inevitable."

And then there is the D-league.

The current rule for the D-league is: A player out of high school had to go through the NBA Draft and if he didn't get picked or cut by an NBA team, he could be eligible for the D-league even though he was under the 20-year age minimum.

The new age minimum for the D-league will be 18 years old. And, according to Frank, a player won't have to go through the NBA draft. How they get to the league, whether it's through a draft or the player's applying to sign up, is still under discussion. But the general purpose will be that if a player doesn't want to go to college, he can go to the D-league.

So, once again, NBA personnel, or essentially NBDL personnel (which could end up being quite similar) would still have to scout these players at camps like this one and Nike in Indianapolis or adidas in Atlanta.

The access issue for the NBA to the high school players comes at a time when the National Association of Basketball Coaches is pushing to get the NBA to change the early-entry deadline from mid-May to the first Monday after the Final Four with a 72-hour window following that decision to decide on staying in the draft. This would eliminate the testing process for potential draft picks.

"We're trying to make sure that everyone makes good decisions," said NABC associate director Reggie Minton. "We're hoping that [the proposal] would make [the student-athletes] give this a lot of thought. We want them to have informed opinions rather than listen to those who don't know."

Not everyone sees it that way.

"The NABC is essentially saying 'screw you' to the kids," Vaccaro said. "They don't want them to see if they could get a fair evaluation of their performance. Well, isn't that nice of them. It's a one-sided decision. That's the hypocrisy of the NABC. That's the reasons we have problems because people like the NABC dictate to people that they don't have control over. Because NBA teams can't talk (to underclassmen during the season) then those players will never get an honest evaluation of their ability."

Vaccaro would like to see NBA teams allow the underclassmen to make a decision the day after the draft whether they want to stay or go back to school. The NBA would probably not go along since teams could lose their draft picks. And, players would still not be allowed to sign with agents.

For now, the summer camps continue through the weekend. There is more scouting to be done later this month in South Carolina, Las Vegas, Los Angeles, Texas and beyond. There will likely be NBA personnel scattered throughout the country taking it all in, for perhaps, one last summer. If that's the case, they'll just have to save those scouting reports for a year when some of these high school seniors are on their draft boards.

As Vaccaro said, "All [the NBA] is doing it putting off the inevitable and delaying it one year."