The first upset of a top-five team occurred on the way to the Maui Invitational. For the second straight season. On the exact date, one year apart. 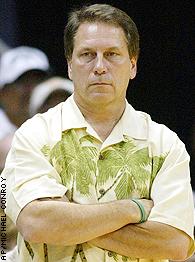 But, just as then-No. 4 North Carolina's 11-point loss to unranked Santa Clara last Nov. 19 at the Pete Newell Challenge in Oakland didn't cause widespread panic in Tar Heel country, the sky won't fall in East Lansing after No. 5 Michigan State's 84-62 loss to unranked Hawaii in Honolulu on Saturday.

There are no similarities among the victors. Last year, Santa Clara was neither expected to challenge Gonzaga for the WCC title nor considered an NCAA Tournament-caliber team. And, as it turned out, the Broncos weren't close.

Hawaii, though, was picked in the preseason to finish second to Nevada in the WAC, and the schedule lays out for the Rainbow Warriors to work toward a possible at-large berth if they can't unseat the Wolf Pack in the WAC tournament.

The Spartans did have their full complement of players Saturday, but cramping -- plus Hawaii's 45-percent shooting performance and the Spartans' 17 turnovers and 27-percent shooting from 3-point range -- contributed to the final margin.

Still, Michigan State can expect to challenge for the Maui title in a field that boasts five top-25 teams. The Spartans were slotted as the top seed in drawing host Chaminade on Monday and will play either Gonzaga or Maryland on Tuesday. Arizona-Kansas and Connecticut-Arkansas sit on the other side of the bracket.

"You know [Izzo] is going to take them over there [to Maui from Oahu] and work them," Hawaii coach Riley Wallace said by phone after Saturday's game. "He didn't take us lightly."

Izzo spent the few days prior to the game working out in Hawaii in an attempt to get acclimated to the humid conditions. And, according to Wallace, the game officials were selected by Michigan State.

That's why Wallace said his team's victory is legitimate in every sense. He returned six players who started at one point last season; three seniors and two juniors were in the lineup at the opening tap.

As soon as the game ended, Wallace said he told his team in the locker room that this "can't be a flash-in-the-pan [win]. We have to keep up the same intensity, knock down open shots and tighten things down on the road. We've always been good at home but the difference has been the road."

Hawaii travels to UNLV on Tuesday for the beginning of an in-season home-and-home series that Wallace and Runnin' Rebels coach Lon Kruger agreed to for the next two years. Then, the Rainbow Warriors return home for Saint Louis and UNLV; leave for Wisconsin-Milwaukee for a return game in the Bracket Buster; host new WAC member Utah State; and open the Rainbow Classic on Dec. 20 against Loyola Marymount, which beat BYU on Friday night. Hawaii could end up playing Iowa State or Oregon State, too, in the championship game.

North Carolina A&T and Penn close out the nonconference schedule before Nevada comes calling -- the marquee WAC game is Jan. 5.

Wallace said he has changed his approach this season, opting for an uptempo style with the arrival of JUCO transfer guard Matt Lojeski to play alongside forward Julian Sensley and sixth man Matt Gibson. The latter two were double-figure scorers last season. Lojeski made his debut with 20 points Saturday against the Spartans.

"If we continue like we are, then we'll be right there [for an NCAA bid] and maybe we'll get more votes, hang around [in the polls] and jump in there," Wallace said. "Nevada is for real but we can make a run [at the Wolf Pack]."

It's hard to question Wallace. The dean of WAC coaches, the 19-year veteran at Hawaii collapsed during a WAC tournament in Fort Collins in the early 1990s (he was deemed to have lockjaw at the time), two procedures to clear blocked arteries in the past seven years, and brain surgery to remove two subdural hematomas in 2002.

So, forgive him if he's not tickled over beating Michigan State -- his 300th victory as Hawaii's coach. Wallace certainly feels as if he's earned -- and maybe deserved -- this bit of good fortune. He said the win ranks with his victory over No. 2 Kansas in the Rainbow Classic championship in 1997, the same season that Hawaii opened with a win over Bob Knight's Indiana Hoosiers. The win over Michigan State was only his second against a top-five team in 17 attempts.

The one fallout though, could be Wallace's plan to entice teams to play his en route to Maui. He was hoping he could convince Kentucky to come his way in 2006.

"Kansas hasn't been back here since then," Wallace said. "Once you play people tough, and we've got the talent here, it's going to be harder and harder to get them to come here. But give Tom Izzo credit. He had the talent and he wanted to play."

So, don't hang the Spartans for this loss just yet. At least remember the Rainbow Warriors, because this win -- unless they unexpectedly break down -- could have enough shelf life to keep them in the bid discussion throughout the season.