EAST RUTHERFORD, N.J. -- J.J. Redick threw this question out to all national championship hopefuls trying to figure out if they're worthy contenders: Who else can take over a game like him?

At the least, Saturday's matchup pitting No. 1 Duke against No. 2 Texas now seems to have been overhyped as Redick, the Blue Devils' all-American senior guard, pasted a career-high 41 points on the Longhorns. 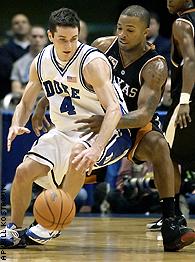 Who can drain 3-pointers over point guards, shooting guards, small forwards, power forwards and lanky centers? Can any other player demoralize a team with 3-pointer, after 3-pointer, after 3-pointer -- nine in all on 16 attempts? Who else can make a defender look downright silly, like the time in Duke's 97-66 throttling of Texas at the Meadowlands when Redick pump-faked Texas JUCO transfer J.D. Lewis and knocked down a three, just another dagger in the Longhorns?

Really, can any player change a game like Redick?

Can Rudy Gay of Connecticut? Can Villanova's Randy Foye or Allan Ray? What about Maurice Ager of Michigan State, or Terrell Everett and/or Taj Gray at Oklahoma, or Darius Washington and/or Shawne Williams of Memphis? The Longhorns' LaMarcus Aldridge certainly showed flashes of dominance in the post, but he'll first need teammates to recognize that he's a go-to guy, something Texas coach Rick Barnes spelled out after the game.

OK, we've got one guy for sure who measures up to Redick in game-changing impact -- Gonzaga's Adam Morrison, who banked in a 3-pointer over two Oklahoma State Cowboys with 2.5 seconds left for a 64-62 win Saturday in Seattle. Morrison's winner comes on the heels of 43-point performances in a win against Michigan State in triple overtime in Maui, and in a Dec. 4 loss at Washington.

The nation needs a comparison to Redick, but the Zags have only a handful of national games left (at Memphis, and maybe vs. Stanford) before they slide into a rebuilding West Coast Conference for the next few months.

Redick does have a teammate who also can alter the flow of a game in Shelden Williams. Williams did score 30 against Memphis in the championship game of the NIT Season Tip-Off at Madison Square Garden two weeks ago. Still, it was nothing compared to the exhibition Redick left folks to think about Saturday.

"That's as good as they come," Duke coach Mike Krzyzewski said. "For me, in coaching, it's up there with any game any kid has had for me."

Redick 3-point shots are a sight to behold. How they're created, when they're hoisted and, what how they alter games is very hard to match.