Two of the four ESPN-era Rushmore coaches have put away their whistles. One more could follow soon. The last probably has another decade or so to go.

This is a tall task, but if forced to choose four coaches to put on a Mount Rushmore of coaches from 1980-present, it's hard to ignore Dean Smith (North Carolina), John Thompson (Georgetown), Bob Knight (Indiana and Texas Tech) and Mike Krzyzewski (Duke).

Dean Smith is looked upon as a deity in the business -- and with good reason. He was a humanitarian, a champion of civil rights and a beloved member of one of college basketball's cherished programs. He fostered countless All-Americans and his coaching lineage has produced a number of head coaches, including a possible Rushmore candidate in Roy Williams. His offense has been replicated. He is revered by former players, assistants and fans. Of course, he also leads the NCAA in total wins with 879.

To be elevated to this level, it's hard to be flawless, but Smith is close. He won two national titles during this era and reached 11 Final Fours in his career at Carolina (five were prior to 1979). He ensured that the Tar Heels were a national program with elite players on a yearly basis. His thumbprint remains on this program to this day.

Putting Thompson on this mountain makes sense, as well. He was a champion of so many while creating a dominating program at Georgetown, recruiting some of the best centers in college and making them into NBA stars. The Hoyas were an intimidating force during the 1980s, and their recent revival under his son, John III, is because of the program that Thompson built.

Georgetown had history, but it was not a household name in every city in America until Thompson arrived. Hoya Paranoia became part of the college basketball vernacular. Thompson took Georgetown to three Final Fours, three title games and one national title (in 1984). His NCAA Tournament record of 34-19 is pretty impressive when compared against others of his generation.

Thompson had an iconic personality while he was coaching Georgetown, and he still commands respect. During the Final Four earlier this month in Indianapolis, members of the national champion Gators flocked to see him after the game to shake his hand (he was doing radio). He remains a presence -- both literally and figuratively -- in the sport.

When he took over at Texas Tech, the common thinking was that he would do well but would not be able to make the Red Raiders into a national program. He has done that, though. Sure, the Red Raiders slumped this past season, but they reached the Sweet 16 last year. Knight has already pushed the Red Raiders to three of their 13 overall NCAA Tournament appearances.

His shadow at Indiana won't ever go away. He built a power, a program that is beloved all over the state. Sure, his tenure ended poorly, but his on-court record is hard to beat. He was fading a bit in the final years as recruiting sagged, but he never wavered with his passion and commitment to his style, his way and a system that worked. He is arguably one of the best teachers ever in the sport. It's hard to have any conversation about a Rushmore without his name in the mix.

The love-hate relationship with Duke among national fans is alive and well. But the one constant is the respect for what Krzyzewski has been able to accomplish since taking over the program. Duke has been to 22 NCAA Tournaments since 1984. The Blue Devils have won three national titles and have been to 10 Final Fours, and they are on a current run of nine straight Sweet 16 appearances. Krzyzewski has built one of the most impressive programs in NCAA history. Duke's home games are events, and Cameron is arguably the toughest home court in the country. 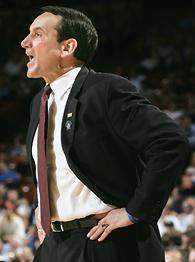 The Blue Devils have their pick of high school All-Americans every year. They produce national player of the year candidates. When Duke plays on the road, the Blue Devils are the biggest draw on every other schedule. No other school can sell out Madison Square Garden or the Meadowlands or places out West other than Duke, regardless of the opponent. The Blue Devils are a happening every season, and it all started with Krzyzewski. While he's the most junior coach of the four, he could end up being the one with the most wins and titles when he retires.

If there was another tier, then the busts of Lute Olson (Arizona), Rick Pitino (Providence, Kentucky and Louisville), Jim Boeheim (Syracuse), Jim Calhoun (Connecticut), Jerry Tarkanian (UNLV), Eddie Sutton (Oklahoma State), Roy Williams (Kansas and North Carolina) and John Chaney (Temple) would have to be considered.

Add in the records of Nolan Richardson (Arkansas), Gary Williams (Maryland), Rick Majerus (Utah), Mike Montgomery (Stanford) and Tom Izzo (Michigan State), and it's hard to push them too far behind any of the others.

Don't sleep on five current coaches, either. Billy Donovan (Florida), Ben Howland (Pitt and UCLA), Mark Few (Gonzaga), John Calipari (UMass and Memphis) and Rick Barnes (Providence, Clemson and Texas) all could make their way onto such a revered mountain at some point in the future.

But forced to choose, you have to go with the first four.